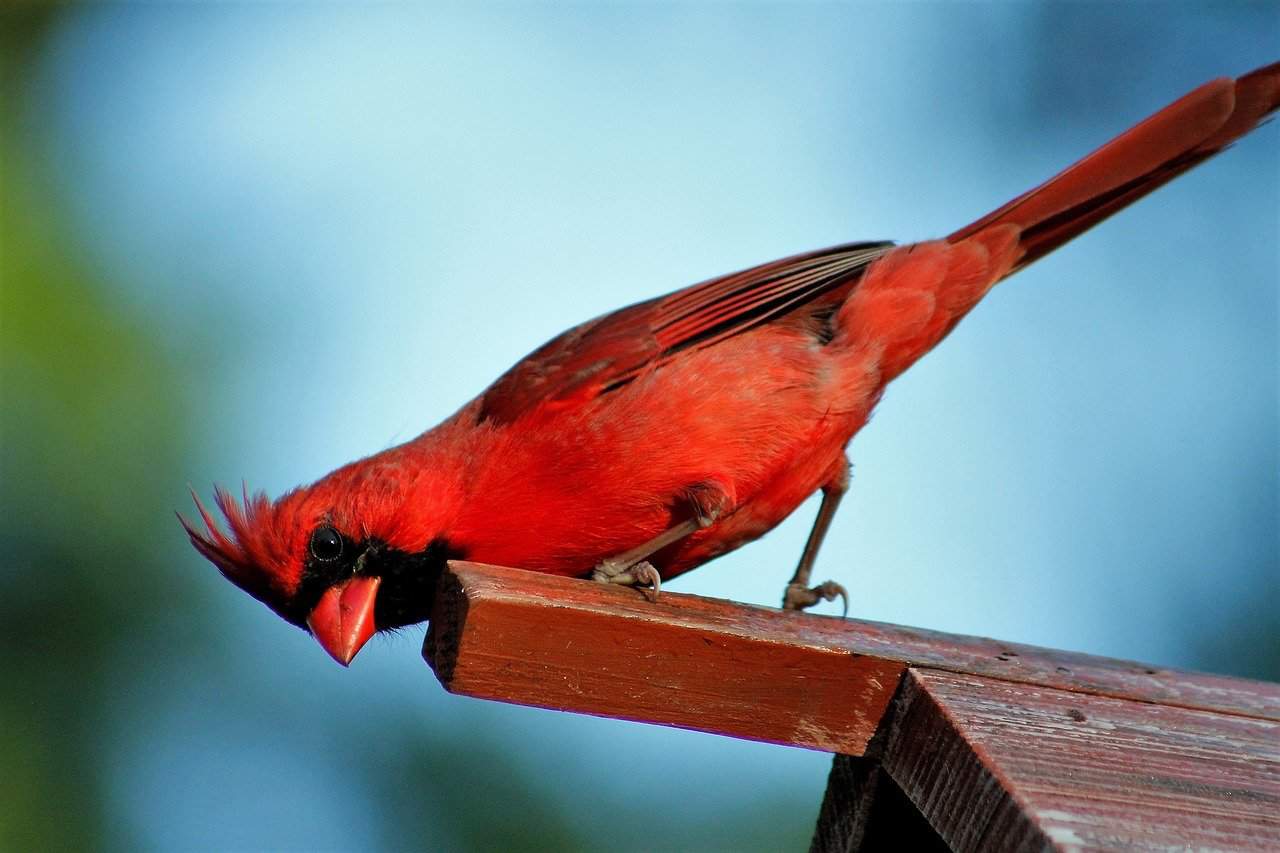 Inside: This article answers the questions “are cardinals rare?” and “are red cardinals rare?”. You’ll learn where you can expect to see them throughout North America and a sneak peek into cardinals that are REALLY rare.

I’ve been backyard birding for over 20 years and have seen hundreds of cardinals in my Wisconsin yard over that time. Many cardinals make Wisconsin their home, but what about in your neck of the woods? Are cardinals rare where you live?

I dove deep into the research and have the answer for you in this article.

Many people throughout the US and Canada have seen beautiful, vibrant red birds fly past or chirp in a nearby tree. This symbol of uplifting joy is a cardinal – northern cardinal to be more precise.

If you have seldom seen this lively bird singing away melodious songs, it is natural for you to think questions like “are cardinals rare?” or “are red cardinals endangered?.”

Are cardinals rare? Are “red” cardinals rare?
No. Cardinals are not rare. Neither the red cardinal nor his buffy-brown mate is rare. There are more than 120 million breeding cardinals today and the number is steadily increasing. If you live within the range they live you have a good chance of spotting one.

Naturally, when asking if a bird species is rare the next logical question is are they endangered?. So, are cardinals endangered?
No. Cardinals are not endangered. They’re plentiful in the Southeastern US and have been expanding their range north into Canada for decades now.

OK, so cardinals aren’t rare and they’re not endangered. But what does that mean? If you consider there are species that are rare but not endangered and vice versa, it’s an interesting question. Let’s take a look at the difference between being rare and endangered.

It is very common for people to confuse the two terms “endangered” and “rare,” using them interchangeably. However, this is incorrect. It is essential to use these terms correctly, as they have quite different meanings.

When a Species is Endangered

“Endangered” refers to a specific species being in danger of extinction throughout their entire geographical range.

This means that this species is not found in large numbers in any region around the world. It also includes those that do exist but are not at their optimal health and are not actively breeding in large numbers and are at risk of possible extinction.

There are a lot of reasons as to why species can be endangered, ranging from habitat loss, habitat degradation, and invasive behavior to regular capture for animal trade and even climate change.

When Species are Rare

In contrast, “rare” is a colloquial term that has a broader meaning, with no specific definition outlined. It could mean that the species under observation has a minimal geographic range and is not common to spot in particular areas.

For example, cardinals can be considered rare in the northwest region of the United States due to the climate.

Cracking the Myth: Red Cardinals are NOT Rare.

Northern cardinals live primarily in the US east of the Great Plains and parts of Mexico. They spend all of their time, including breeding, in the same general area.

According to The North American Breeding Bird Survey, there are about 120 million breeding cardinals today, a number that has constantly increased since the late 1960s; answering questions like ‘are cardinals endangered?’ or ‘are cardinals rare?”, become a very easy no.

Wondering where and how you can spot this magnificent medium-sized bird in the United States? I broke it down for you in the table below followed by a map for those of us who are more visual.

The male northern cardinal is known for its vibrant red plumage while his lady is a buffy-brown. Many people don’t realize they’re a pair – from the same species. This may account for curiosity around its rareness. It makes sense. If you think all cardinals are red then you’re only seeing 1/2 of the cardinals in your area.

Both male and female cardinals are easy to spot on trees due to their vivid feathers. In fact, unlike other wild birds, it is quite easy to tell between the two cardinal genders just by looking at their appearance.

Male cardinals are distinguishable by their beautiful red plumage. They are covered in bright red plumage from head to tail. Moreover, they have black spotting around their eyes and beak with a relatively more prominent crest on top of their heads.

In comparison, female cardinals have a more faded reddish-brown plumage that blends into peach undertones.

For all the bird enthusiasts skimming through this article to look for something exclusive about cardinals, you’re in for a surprise! While the answer to “are red cardinals rare?” will always be a no, you’d be hard-pressed to find a half-male and half-female cardinal! Yes, you read that right.

A half-male and half-female cardinal has been spotted around Pennsylvania quite a few times and is scientifically described as having a genetic condition called Bilateral Gynandromorphism.

In appearance, this rare mutation makes it look like two cardinal birds of the opposite genders are morphed together into one.

The fascinating mutations don’t just stop there! Recently, a cardinal with a vivid yellow plumage has been spotted in Illinois. Yellow cardinals are unable to grow red feathers and are dubbed to be quite rare.

If those 2 rare cardinals didn’t get your attention – how about the white cardinal? This rare species comes in two flavors – albino and leucistic.

Albino cardinals are all white, have pink eyes, and are extremely rare.

Leucistic cardinals reflect a variation in how much of the body is white and how much is normal color (red for males, buffy brown for females).

Both white types of cardinals are a result of genetic mutations pertaining to a pigment necessary for producing red feathers.

If you’ve gotten to this point and realize the bird you’re interested in is not a cardinal, rather it’s a bird that looks like a cardinal, check out my article 9 Birds that Look Like Cardinals but Are Not to quickly identify your bird.

Cardinals are not rare – not even the red ones. Both male and female cardinals are found in abundance throughout the range they inhabit in the US and Canada and increase in numbers every year.

That said, there are several types of cardinals that truly are rare – the half-male/half-female cardinal, yellow cardinal, and white cardinal. As a result of a genetic or pigment issue, the rare cardinals fail to grow their feathers the correct color (red for males, brown for females).

Regardless of the type of cardinal you encounter, it’s always fascinating to see them singing, chirping, and hanging out on our feeders.