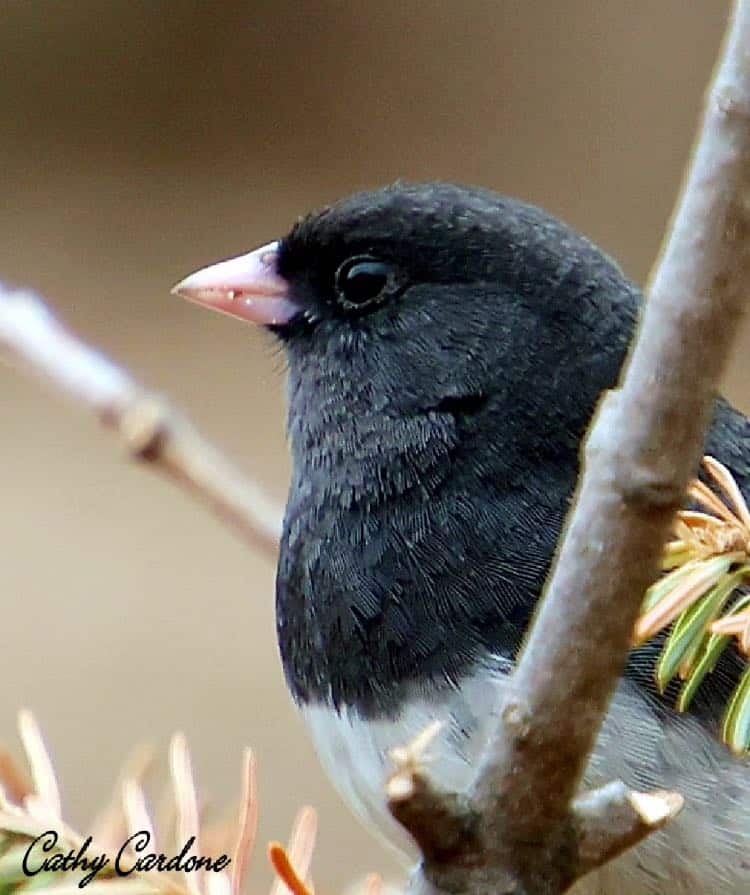 Attract dark-eyed juncos if you want to see their sweet little faces and charming behavior. They’re found all across North America so your chances of enticing one to your yard are great. The key is to know when they will be in your area so you’re ready for them.

Seven Proven Ways to Attract Dark-Eyed Juncos to Your Yard

Before I get into the detail I’d first like to share where they live, what they look like, their habitat, sounds, diet, mating, and nesting habits.

If you’re in a hurry feel free to skip to the 7 Proven Tips to Attract Dark-Eyed Juncos.

Some dark-eyed juncos live in the same area year-round while others migrate north for breeding and then of course head back south for the winter (referred to as non-breeding on the map).

For those birds that do migrate, they’ll head north to Canada and Alaska to breed (March/April timeframe). In the fall, they’ll of course head back south for the winter (October/November timeframe).

Dark-eyed juncos are tiny little birds about 5.5″ – 6.5″ long. They are part of the sparrow family and come in several different sub-species.

At one time the dark-eyed junco was thought to be one species. Today, this sparrow is known as seven different subspecies – six of which I’ll discuss. The most common are the slate-colored, Oregon, and gray-headed.

Note: Apparently there’s a sub-species called “Guadalupe” but I was unable to find any information about it.

Each subspecies contains gray and/or brown with white underparts but varies in the remaining plumage. This is especially true for those in the eastern vs. western part of the regions.

The table that follows details the plumage for 6 dark-eyed junco sub-species groups along with where they can be found in their geographic range.

Given that these birds can be found across the US and Canada it only makes sense they also enjoy a variety of habitats including forested areas (both coniferous and deciduous), wide-open spaces, partially wooded edges, parks, and backyards. So, just about everywhere!

These birds are groundhoppers. After all, that’s where their primary food source can be found – insects (beetles, mothers, butterflies, caterpillars, ants wasps, flies) and spiders. During the spring and summer, insects and spiders make up the majority of their diet and are what they feed their young.

The rest of the year they can be found foraging for seeds as well. They’ll eat seeds offered on the feeder if they’re unable to find it in nature from grasses, timothy, ragweed, pigweed, knotweed, chickweed, buckwheat, and other seed-bearing plants.

During the winter, dark-eyed juncos are very social often joining forces with other sparrows (and sometimes bluebirds) in large flocks foraging for food.

Nest begins with the female deciding on the nesting site. Choices are as wide as their range! Typically she’ll choose a ground-level nesting site such as an area surrounded by rocks or other plant vegetation, or the slope of a hill.

Alternatively, she’ll select a higher site that’s closer to humans such as under a building, on a window ledge, in a hanging basket, or even inside a light fixture.

The nest is comprised of twigs, leaves, and roots. It’s common for her to line the nest with pine needles, grass, or moss. A finished nest measures about 3.5″ across.

Check out this still video with some amazing shots of a dark-eyed junco family’s journey from building the nest all the way to the chicks fledging.

7 Proven Ways to Attract Dark-Eyed Juncos to Your Yard

1. Time it right (know when they’ll be in your area)

The first key tip for attracting dark-eyed juncos is to know when they’ll be in your area so you know when to be ready for them. If you’re lucky, you live in an area where they live year-round and don’t need to be concerned about timing.

For the rest of us, they’ll be in our area for the winter or during the breeding season only. I’m showing the range map again so you can determine when they’ll be in your neck of the woods.

For those dark-eyed juncos that do migrate:

You can easily attract dark-eyed juncos with their favorite feeder foods. They’re common visitors at the feeder and love to munch on the following feeder fare so be sure to have some or all available to them.

Did you know you can attract dark-eyed juncos without a feeder? Plant their favorite plants to attract them.

During the fall and early spring when insects are scarce, many birds, including dark-eyed juncos, rely on seeds from grasses, and other wild native plants for substance.

Here are some native plants the dark-eyed junco favors. If you have a patch of wildland on your property you could plant some seeds, otherwise if they’re already present in your yard leave them for the birds.

There are many native plants this bird loves that are also invasive such as knotweed, chickweed, and pigweed. We don’t recommend these plants for obvious reasons.

Attract dark-eyed juncos with water. All birds need water to drink and bathe in. So do dark-eyed juncos! If a natural source of water is not available nearby consider installing a pond – even a small patio pond will attract wild birds.

A birdbath is another viable option.  Birds are drawn to moving water so adding a fountain to the birdbath could increase your chances of attracting one.

5. Don’t be quick to clean up under the feeder

Avoid using chemicals in and around your yards if you want to attract dark-eyed juncos or any wild birds. Using grass fertilizer and pesticides kills insects, the primary food source for many birds including dark-eyed juncos. If you kill the insects there won’t be any to eat. Perhaps more horrible would be death by poisoning in the case of a wild bird eating a toxic insect!

In addition, they delight in seeds found on the ground – ground poison can get on the seeds and again, cause dire harm.

A primary predator of birds everywhere is cats – domestic cats. This includes feral cats that can roam a neighborhood. If you want to attract dark-eyed juncos rein in the cats!

According to a study published in Nature Communications, each year almost 4 billion wild birds lose their lives to outdoor cats. Not only does this rock the ecology it makes your yard unappealing and dangerous for many forms of wildlife.

If it’s your cat, keep it inside. Don’t be fooled. Even the nicest and sweetest of kitties have the natural instinct to hunt birds. It’s not their fault.

If it’s a feral cat implement a non-toxic deterrent method such as scattered fresh orange or lemon peels in the area.

If you’re really gung ho, consider trapping the feral feline and taking it to a human society that offers free neutering/spaying. This may prevent the next person from having to deal with a feral cat at their feeder.

Take some of the simpler tips and apply them right away (or when they’re in your zone). If you don’t see them visit, try and apply some of the other tips. You’re sure to see these cuties in no time.

Where do Dark-Eyed Juncos sleep at night?

How long do Dark-Eyed Juncos Live?

According to The Cornell Lab, the oldest recorded Dark-eyed Junco was over 11 years old.