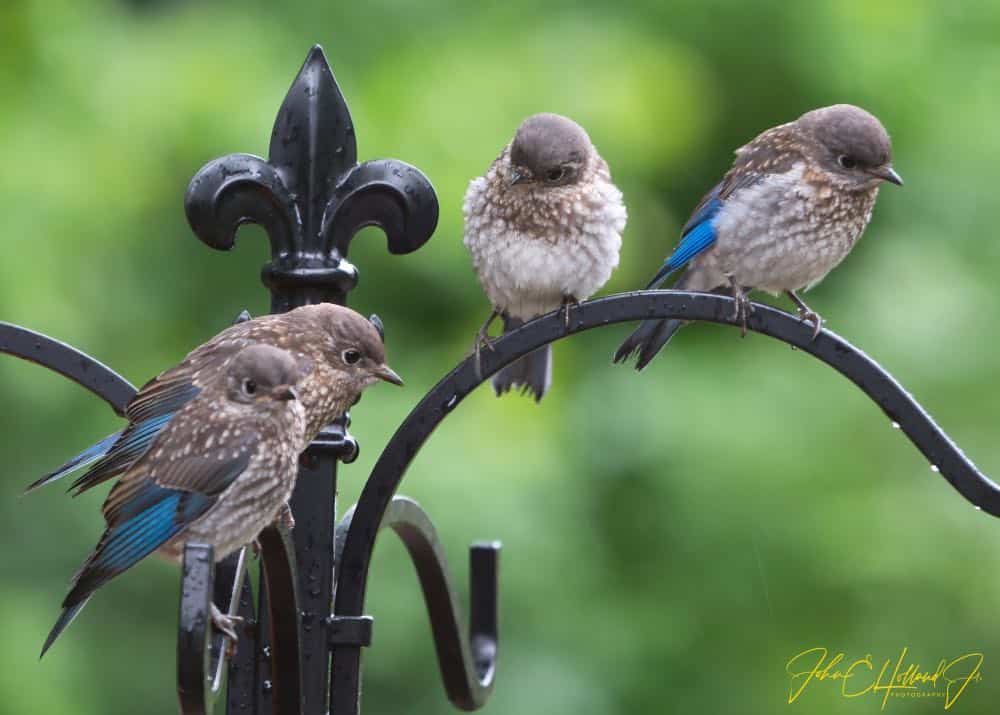 You’ve got an eastern bluebird nest and eggs in your yard and want to know how long before they hatch into adorable baby bluebirds. Who wouldn’t? You want to be ready for when the magical day comes and maybe even experience the amazing miracle of a bluebird egg hatching in real-time.

Experiencing, observing, enjoying, and researching backyard birds is what I do. I’ve been hosting them in my backyard for over 20 years. Plus I have many bird friends with even more experience to fill in the gaps. Additionally, I have an extensive library of expert books to refer to including The Bluebird Monitor’s Guide, a Cornell Bird Library Guide, and The Bluebird Book by Donald & Lillian Stokes.

If you’re like me you want to know the facts about eastern bluebird eggs and babies. Keep reading – I’ve got answers to all your burning questions.

Below is a day-by-day progression of bluebird babies from the egg stage to hatchlings all the way until the day they fledge from the nest. In the next section, we’ll dive into the details of each stage.

According to the Mass Audubon, baby birds go through three stages of development – hatchling, nestling, and fledgling until they reach the juvenile stage. Adulthood is just around the corner.

Eastern bluebird eggs are usually sky blue in color, but occasionally white. They’re about .8″ x .7″ in size and each brood is usually between 4-5 eggs.

How long does it take for bluebird eggs to hatch?

It takes about 12-14 days for bluebird eggs to hatch. The female may take several days to lay each of the eggs during which time they are in a pending state. The 12-14 day incubation timer begins the day she starts to incubate the eggs as the heat of her body is required for the eggs to develop.

As you’ve already witnessed from the above photos of baby bluebirds growing from day-to-day, baby bluebirds grow dramatically fast and take on a different appearance at each stage (hatchling, nestling, fledgling, and juvenile). Let’s take a look at each baby bluebird stage in more detail.

Right after baby birds hatch they are called “hatchlings”. At this stage, bluebird hatchlings are naked with just a few patches of light down. Their eyes are closed and they’re balled up in fetal positions. There are also noticeable dark “lines” throughout its body which are essentially wet down and soon-to-be feathers stuck together.

With no feathers and barely any down the babies are dependent on mom to keep them warm.

There are no words to describe the miracle of baby birds hatching. Check out the amazing video below of baby eastern bluebirds as they’re hatching.

As you can see, they begin to eat immediately (literally) and the momma bluebird eats the eggshell soon after. It’s a great source of calcium for the next brood.

After about 4 days post-hatch the babies become “nestlings” and have already grown feathers and more down. Eyes may be slits but not yet open. The dark lines are now actual feathers that have become unstuck and more feathers preparing to emerge from beneath the skin.

At day 6 the nestlings’ feathers start to make their way through the skin on the head and wings. Eyes are preparing to open if not already.

Check out the sweet video below showing the animated bluebird nestlings…so adorable!

In a few short days, the nestlings will begin preparing to fledge. During this time they are very active – exercising and preening their wings. You should notice the white ring around the eye at this stage – it will disappear once they’ve grown to be adults.

Baby bluebirds officially become fledglings when they leave the nest – between 13 and 21 days of age. They look like real birds at this stage with fluffy brown spotted bodies and blue wings.

In my opinion, they are really pretty fledglings. Some wild birds are downright ugly at this age.

The birds instinctively know when it’s time to fledge. Also, mom and dad will be calling for them outside the nest.

Once they escape the nest it’s time to practice their flying skills. They can flutter around and hop on the ground but are still dependent on mom and dad for food.

Here’s a sweet video of an eastern bluebird as it fledges. If you listen closely you can hear mom or dad in the background calling them.

Juvenile bluebirds are essentially fledglings that can now find their own food. They will primarily hang around the parents and siblings but could support themselves if necessary. They remain juveniles until they’ve molted (lost feathers and grown new ones) in the fall and taken the appearance of an adult.

Do bluebirds leave their eggs unattended?

Bluebirds may leave their eggs unattended to forage for food, get a drink of water, take a bath, or just take care of general hygiene such as defecating or preening feathers.

How long do Eastern bluebirds stay in the nest?

Baby bluebirds remain in the nest until they fledge – which is about 19 days after hatching.

What to do if a baby bluebird egg doesn’t hatch?

According to the book The Bluebird Monitor’s Guide (2001), between 10-15% of bluebird eggs will not hatch. They are infertile. There’s really nothing you can do if the egg is infertile – it’s part of nature.

Keith Kridler, co-author of The Bluebird Monitor’s Guide says it’s ok to remove the egg from the nest if it’s been 5 or more days since the last egg hatched. Another sure sign the egg is not viable and won’t hatch is fly specs on the shell (flies can smell the odor of a bad egg) and/or flies clustered around the nestbox.

Keith goes on to say these rotten eggs have been known to explode resulting in a messy and unhealthy situation (viruses and bacteria on the chicks). Seems to me all the more reason to remove an egg that won’t hatch.

Who wouldn’t want to host baby eastern bluebirds in their yard? It’s a fascinating part of nature to watch mom lay her eggs, babies hatch, and nestlings fledge to become the next generation of eastern bluebirds. Plus, young bluebirds are the cutest of all wild birds (in my opinion).