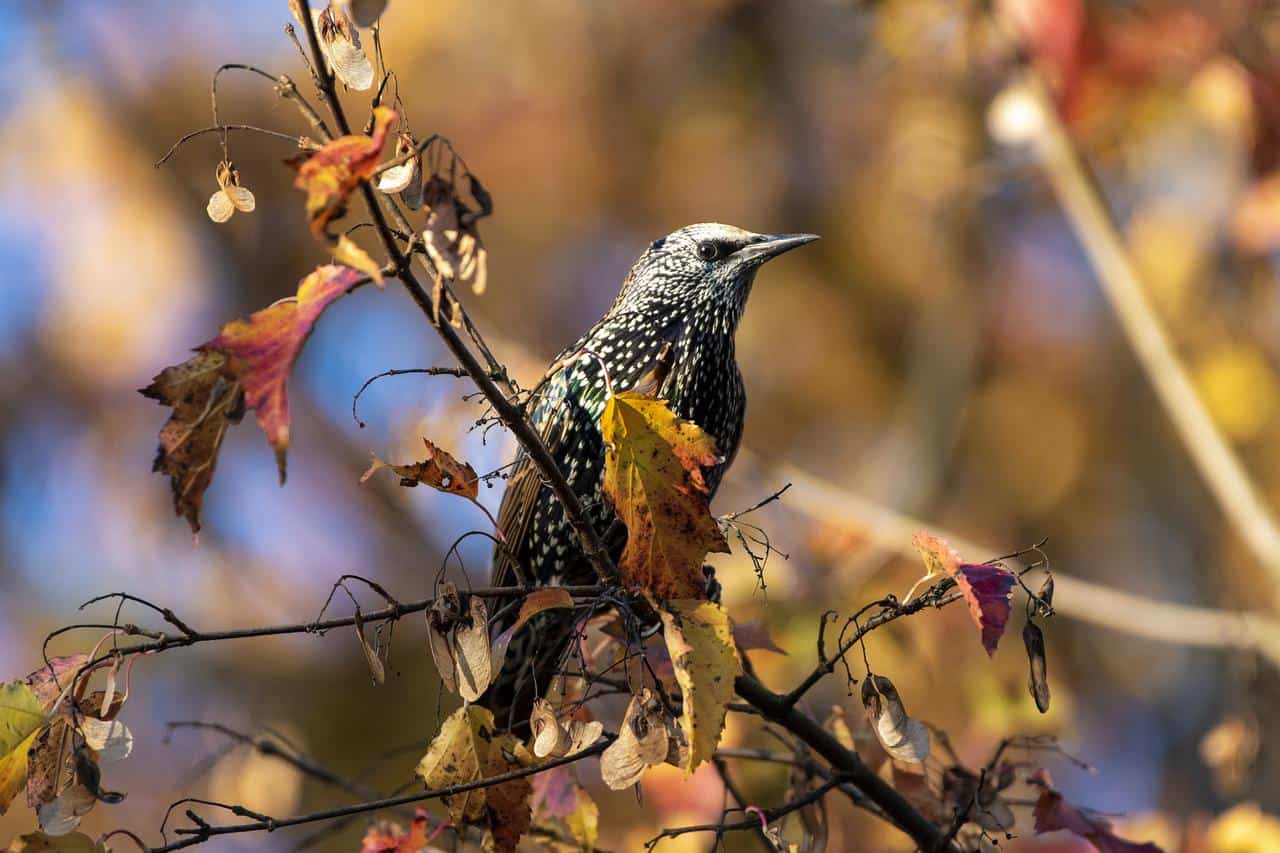 Find out what birds do in autumn and how this change in season affects their behaviors. What are they up to? Are they still singing? This article explains it all!

Spring and summer are amazing times to be birdwatchers. All of nature is overflowing with energy as animals and birds have extra daytime hours to raise their young and search for food.

However, warm weather isn’t the only time for spotting your favorite species. As the days get shorter and the nights cooler, birds remain active in preparation for the impending cold. Bird behavior in autumn also makes some fascinating adjustments.

Keep reading to learn about what birds are up to in autumn.

There are several changing patterns of wild birds as the calendar enters September and October. With less oppressive heat and even a hint of snow in the air, birds instinctively know it will be cold soon. There is much to be done so they can comfortably survive the winter.

When birds feed their hatchlings in spring, they search for foods rich in protein to help the babies grow and thrive. This diet shifts in the later part of the year, as the little ones no longer require so much care.

In autumn, birds want food high in sugars and fats to help them put on bulk. Adding to their body weight helps birds prepare for the months when food is less plentiful. Bulking up also gives birds fuel to head south (if they are a migratory type).

Sending Off Their Young

Humans borrowed the phrase “empty nesters” from the bird world. Just as middle-aged parents send their children off to college, so do wild birds encourage their young out of the nest to become independent.

In the autumn, you will see juveniles more frequently around your feeders. It’s not that there are more of them, it’s that they are out of their cozy homes where they have been secluded from human view during the summer.

With drastic temperature extremes in parts of the country, some birds prefer to relocate during cold weather. They start their migratory patterns around June and arrive at their destination in the fall, so they can build a home before winter. Autumn brings many bird species further south than their natural habitat.

The iconic imagery of migration is a “flying V,” or the V-shaped pattern geese make during their noisy travels south. But there are many species of birds who migrate besides geese and cranes. Starlings, swallows, and even robins tend to band together in feathery caravans as they head south in search of milder winter temperatures.

Birds continually shed their feathers and replace them with new ones year-round. However, autumn is when bird molting goes into overdrive. In an effort to make their tiny bodies healthy and safe, birds molt feathers more frequently in preparation for the cold. This action gives birds a brand-new protective coat when winter arrives.

For migratory birds that travel long distances, the plumage replaces itself even more often so that they can fly more efficiently. You may see more dropped feathers in your yard this time of year.

For safety and food collection, many birds tend to abandon their independence as autumn approaches. Birds prefer to travel in a flock at this time of year, as it makes it more difficult for predators to hunt a single bird. Plus, more hands (or feathers) make for less work: a neighbor bird who finds a good food source can share with others in its flock so that no one starves.

Ducks and geese most often travel together like this, but smaller birds like swallows, blackbirds, and sparrows do it too. Common feeder birds even band together in several different species for the same purpose. It’s not uncommon to see chickadees, titmice, juncos, and nuthatches being friendly during this time of year.

What Birds Do You See In Autumn?

The songbirds and common wild birds you are used to seeing at your feeder will remain the same from summer to autumn. The only difference is the migratory patterns of some species, which take them to regions they don’t normally visit as they journey south.

If birds are migrating together, you might see enormous flocks of starlings, swallows, and robins. Giant bird species such as herons and cranes tend to travel in large groups as well.

Birds that stick to trees for their food, such as woodpeckers, may visit your feeder more frequently this time of year. As they bulk up for winter, they are in search of more calories and may stray outside of their typical hunting radius.

Check out All About Bird Migration & Which Birds Migrate.

How Can We Help Birds In Autumn?

There are many ways humans can intervene to provide basic needs for birds in autumn.

As we said earlier, birds’ dietary needs change in the later part of the year. Instead of protein, they’re in search of sugary and fatty foods.

To attract hungry birds to your feeder, put out an array of nuts, berries, other fruits, and nectar from autumn flowers. These foods will provide them the diet your regular feathery friends need and maybe even attract some migratory species you wouldn’t normally observe in your area.

And speaking of migration: The birds who fly south for winter are serious eaters! Most of them enter a state called hyperphagia, or overeating, to fuel themselves for the long journey. You might find yourself refilling the feeders more often than usual so you can accommodate these ravenous travelers.

As wild birds begin to look for their winter dwelling, fall is the time to provide them with homes they can settle in. Not only are you helping create a safe place to nest, but also a better opportunity for you to see your favorite birds close up!

There are many options for sheltering wild birds. These include:

If you have a dog that sheds profusely, consider brushing them outside and leaving the fur bits strewn around the yard. Wild birds will collect it and use it for insulation in their nests. Dogs with undercoats, such as huskies, have extremely warm fur that birds love.

Do Birds Sing in Autumn?

The calls of birds change slightly with shifts in weather. Bird calls serve a few purposes, including attracting a mate and defending their territory. Due to their life cycle and seasonal patterns, the latter happens year-round, but the former is mostly a spring occurrence.

Which Birds Have Autumn Songs?

Some birds cease their calls entirely during this time of year, as it’s not necessary to signal other birds. But others pipe up for one reason or another.

House sparrows and starlings are more active than other birds this time of year, as they are late nesters. You can hear their calls throughout September and October. Any bird might feel encouraged to get loud if they feel their territory is under threat, especially as real estate becomes more valuable heading into cooler temperatures.

Do Robins Sing More in Autumn?

Birdwatchers know that robins are some of the more vocal birds in the fall. Though their song changes to a darker and more melancholy tune, they don’t seem to sing less frequently than in spring and summer.

Some ornithologists theorize that this is due to the autumn and spring daylight cycles being so similar in length. Robins are spring nesters, so the fall could trigger a parallel singing response.

Additionally, or more likely, it has to do with holding their territories as winter approaches.

Do Birds Chirp In November?

November in temperate zones is when the cold really begins to set in. At this point in the autumn season, most birds have established their nesting sites, done their heavy feeding, and are ready to settle in for a cozy and protected winter.

It’s rare, though not uncommon, to hear bird calls this late in the year. If you do hear them, chances are it’s from migratory birds like geese, who signal to each other in the air as they make their travels.

Though habits like feeding and nesting shift slightly in autumn, there are still plenty of active birds to observe in the cooler months. Songs may be fewer and far between, but most birds remain energetic as they gather the right kinds of food and prepare for winter.

In addition to the regular species you are accustomed to, there’s also a good chance you’ll see migratory types passing through. Keep your eye on the sky and on the feeder in autumn, and enjoy the many colors and personalities who come to visit! 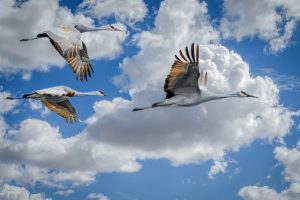