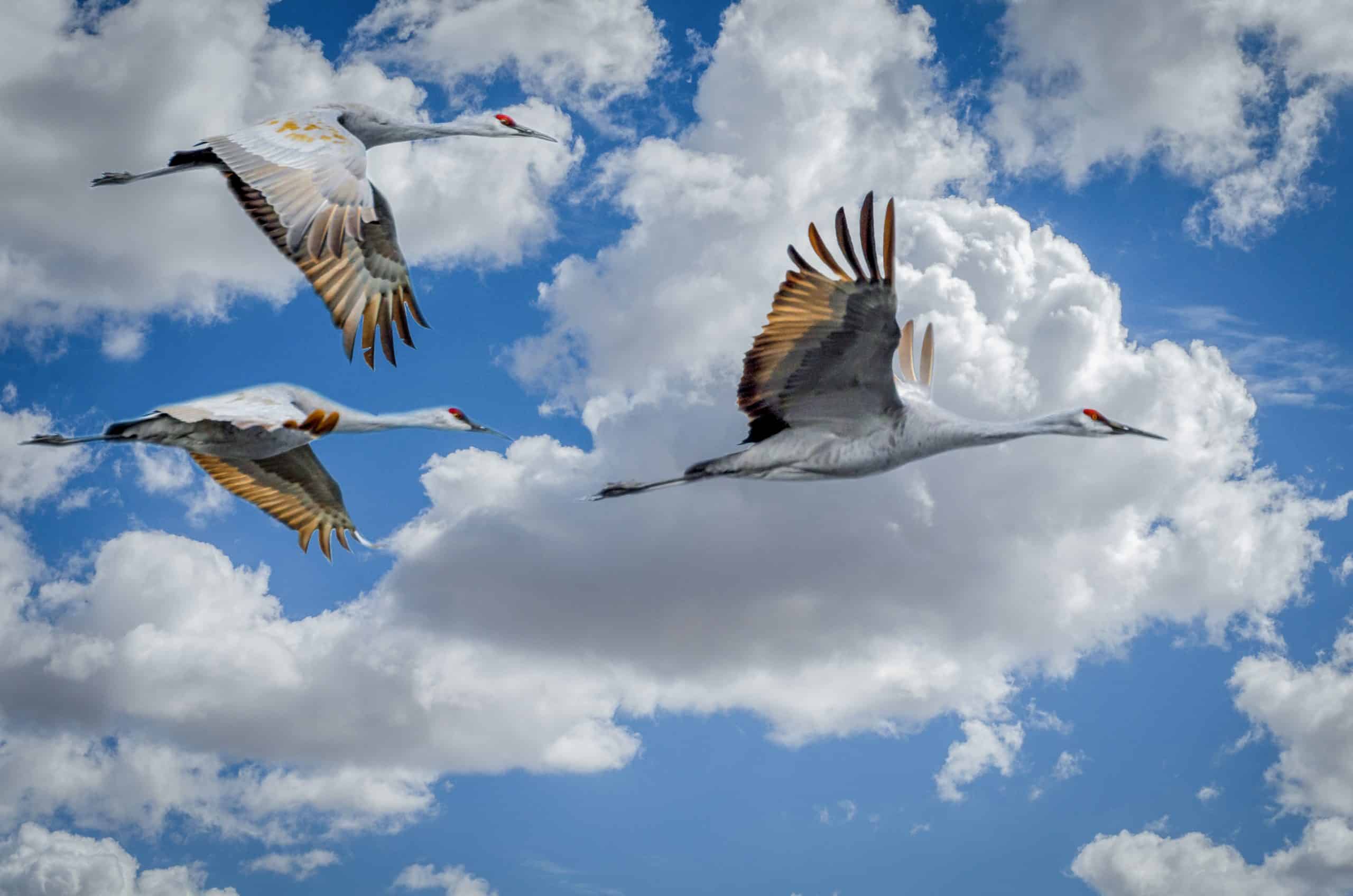 If you have ever looked up in the sky and have seen the beautiful formation of birds in the process of migration, this guide is for you.

Before revealing which birds migrate, I thought it would be helpful to understand why birds migrate as well as the different types and patterns of migration.

If you prefer, you can skip ahead to which birds migrate.

Many birds begin migration when their food supply is depleting, the days are getting shorter, the temps are dropping, and/or they’re genetically predisposed to migration.

As seasons change, so do the food supply, temperature, and length of the day. Consider the fall migration in North America. When the leaves start to change, the days are cooler, it stays dark later and starts to get dark earlier. We also begin to see flocks of birds in the sky heading south.

The habitat they’re leaving has lost its bounty. They’re heading south where the warmth brings them renewed resources – especially food and water. And, the longer days enable them to hunt for food longer.

The video below is an excellent overview of bird migration including “why” it occurs.

What are the Types of Bird Migration?

These migrants travel very long distances, covering thousands of miles across multiple countries. Some of the most frequented migratory routes include Canada to South America, The Netherlands to New Zealand, Russia to Australia, and even New Zealand to Alaska!

Some examples could be from city to city, possibly state to state, but never close to the number of miles traveled by long-distance migrators.

These birds will store their energy as much as possible and only migrate to the distance required to gain the resources they need for survival.

There are fewer types of short-distance migrators, including sparrows and waxwings, the blue grouse, and many grasslands birds.

Nomadic migrators will only use their stored energy to find food and not migrate beyond the distance necessary to find their resources.

When the resources in the area are depleted, they move on to the next resource-rich space, become residents of the new area temporarily, and the cycle continues.

These birds will only travel very short distances, such as a few miles, to seek out warmer temperatures but, for the most part, stay in their home habitat through the winter.

They are well-acclimated to temperature changes to stick out the winter without going far.

Some examples of these birds include cardinals, pigeons, doves, finches, chickadees, and downy woodpeckers.

In addition to the four categories of migration, there are also ten recognized flight patterns.

Latitudinal birds migrate from north to south or south to north, such as from Canada and the US to Mexico or South America.

Longitudinal birds migrate from east to west or west to east. For example, California gulls travel between Utah and California as the seasons change.

Altitudinal birds migrate from higher elevations to lower elevations, such as birds that are residents of mountainous areas.

As the season changes and it becomes colder near the top of the mountain, the birds will migrate down the mountain to seek out warmer temperatures and more opportunities to breed.

Altitudinal migrators fall under the “residents” category, as they only travel a few miles.

Partial migration means that all the birds included in the species will not migrate. Some are residents, while others are latitudinal migrators seeking out warmer temperatures in southern climates.

Vagrant migration has no clear or set path or rules the birds follow. These birds do not move in patterns and seek out food and mates wherever available.

Daily migrators only seek out food during the daytime and return to their resident homes at night. Some of the reasons for daily migration include temperature and seasonal changes, predators in the area, and the availability of mates.

As the name suggests, nocturnal migrators only migrate at nighttime. Quite a few birds are nocturnal migrators, which most people are not aware of due to not being able to see their formations in the darkness. This is an ideal migration option for these birds as the night protects them from potential predators.

Reverse migration occurs when the bird migrates in the opposite direction of the usual migration path. This usually happens when young birds do not know how or where to relocate.

Loop migrating birds follow one migration route to breed but return via a different path. The majority of the birds that follow this pattern include seabirds and shorebirds that migrate annually.

Dispersal migration refers to juveniles forced by their parents to migrate from their hatching grounds to find a new residence. This only happens once in a bird’s life, also affectionately known as being “kicked out of the nest.”

There are 10,000 known bird species in the world, and approximately half are migratory. This includes many different species of backyard birds to some kinds of flamingos!

Autumn migration typically peaks in September in the northern hemisphere and ends in early November but depends on temperature changes, seasonal changes, light, food sources, mating opportunities, weather changes, and what part of the world the birds live in.

The list that follows details which North American birds migrate and the type of migrator they are.

Not every bird migrates. Plenty of species settle down in their forever homes rather than embark on an epic journey. Here are a few examples:

Which Bird Migrates the Farthest?

The arctic tern is the farthest migrator, typically traveling about 24,000 miles each year during their migration season. This seabird migrates from pole to pole, seeking out summer sunlight.

They experience the most daylight of any animal as their migration pattern affords them constant sunlight. Although this species is known to be the farthest traveler, it does not hold the record for the longest nonstop flight.

The bar-tailed godwit holds the record for the longest nonstop flight coming in at an astonishing 6,800 from Alaska to New Zealand with no breaks! This is an endurance species that is unmatched.

Although flamingos are considered non-migratory birds, they will migrate if the climate changes in their habitat deplete their resources for food, water levels change, or there are fewer opportunities for mating in their area.

Flamingoes are water birds, and if their water source dries up or freezes over, it will be necessary for them to migrate to find a new source of water.

A great example of this is an African flamingo that escaped a Kansas zoo in 2005 and has been seeking out water sources ever since. Bird watchers spotted the pink pilot 17 years later on the Gulf Coast of Texas.

Flamingoes can travel 37 miles per hour and typically migrate at nighttime (nocturnal) to avoid predators.

Since birds cannot read a map or have a calendar, how do they know when to migrate and where to go?

Simple! Birds are born with an ingrained GPS to navigate based on their senses.

Birds can use the sun, the stars, and the earth’s magnetic field to get information. They also rely on the setting and rising of the sun, temperatures, and weather patterns to decide when the best time to migrate is. These cues guide them to the area with the best weather, temperature, and sunlight.

Scientists do not know how birds can follow the same flight path home from migrating but do know that birds rely on landmarks to determine their location and recognize areas they are returning to.

Scientists can use satellite tracking, geolocators, and banding to track bird migration. This way, they can track and document a bird’s flight path and migration pattern and keep it as stored data.

Knowing the categories, types, patterns, and bird species that migrate is not just intriguing; it’s also beneficial for the earth’s ecosystem. When you understand how your local birds live, you can take measures to protect their resources and habitats when they need them most.