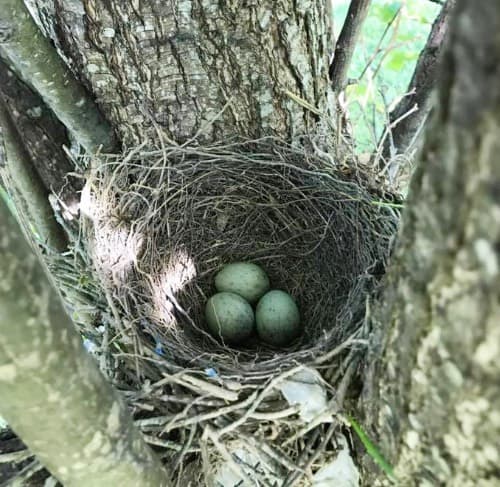 Maybe you discovered a nest in your tree and wonder if it’s a Blue Jay’s nest – but what does a Blue Jay nest look like? What color are the eggs? What size are they?

I have the answer to these questions and more on the topic of Blue Jay nests & their eggs.

I’ll walk through the chronological nesting habits of a Blue Jay pair starting with when nesting begins all the way through the laying of eggs.

With more than 20 years of experience hosting backyard birds and having numerous Blue Jay pairs raise their young around my yard, I’m well versed in Blue Jay nests and their nesting behavior.

Of course, I don’t know everything so rely on several highly respected organizations in the world of wild birds (The Cornell Lab of Ornithology and The Audubon Society) to fill in the gaps.

Blue Jay pairs begin scouting for an ideal nesting site as early as February so the new home is complete when she begins to lay eggs in March.

Their primary objective is to find a location that best protects the young. Protection from predators and the weather is crucial if the blue beauties have a chance of surviving.  This can be tricky since Blue Jay predators can come from above (osprey and hawks) and the ground (snakes and raccoons).

Blue Jays usually choose a tall deciduous or coniferous tree or shrub. Nests are built high in the tree anywhere from 5 – 50’ up. According to The Cornell Lab of Ornithology, between 10-25’ up is the most common height.

The nest is constructed within the inner branches or horizontal fork in a limb well out from the trunk for maximum stability.

The Blue Jay nest is a crudely constructed basket of twigs, bark, and other plant matter to create the bulky open-cup structure. Sometimes they’ll use mud to “cement” the nest for added strength.

Soft materials are used to line the nest including rootlet, moss, and even soft man-made materials such as yarn.

When times get tough the pair may even use a random fast-food wrapper or similar type of material to include in the nest.

Both male and female Blue Jay will gather materials to build the nest. However, the male usually brings most of the supplies and the female primarily builds the nest.

The result is an insulated, sturdy, protective, and soft nest to raise baby Blue Jays.

Will Blue Jays Abandon the Nest?

The Cornell Lab tells us that Blue Jays may abandon their nest after detecting a nearby predator. When this happens, a new site is found and construction of the new nest begins.

When Do Blue Jays Lay Their Eggs?

Female Blue Jays begin to lay their eggs as early as March and as late as July. They have between 1 and 2 broods, but 1 brood is typical.

By the way, brood is a fancy term for a set of bird eggs/babies.

The female incubates the eggs for about 17-18 days while the male brings her food. On a few occasions, she’ll leave the nest but only to get a drink or stretch.

Nearly everyone on the planet knows robin eggs are blue. In fact, the color is so well known paint manufacturers have named a paint color after it – “Robin’s Egg Blue”.

The fact is, while most robin eggs are blue not only can the shade of blue vary the eggs can also be white or white with spots.

Earlier we learned Blue Jay eggs can also be blue (or olive-green or light brown).

Many people don’t realize both Blue Jay and robin eggs can be a color other than blue so when the question is posed “what’s the difference between Blue Jay eggs and robin eggs” it’s assumed they’re asking about the blue eggs each species’ can produce.

What’s the difference between Blue Jay eggs and robin eggs?

The photos below visually illustrate the difference between Blue Jay and robin eggs but don’t always tell the whole story. Sometimes the lighting differences in the photos give the impression that one egg is lighter or darker than it really is. Still, photos can be helpful.

After about 18 days of incubation, the blue jay eggs begin to hatch. Hatchlings are featherless, their eyes are closed, have small patches of down, and pink mouths.

The female primarily stays with them in the nest while the new Dad brings food for both the female and nestlings.

Many people have additional questions about Blue Jays and their nesting habits. Here are a few answers.

What to do if you find a Blue Jay nest?

Get out your binoculars or superzoom camera, and observe the nest from a distance.  Don’t get too close or they may become spooked and either dive-bomb you or worse – abandon their nest.

Do Blue Jays Use Birdhouses Or Nesting Boxes?

No. Blue Jays prefer to construct their own nests of twigs, bark, and other organic matter and place them high in a dense area of a tree.

If you want to see these beautiful birds up close, the next step is to attract Blue Jays to your yard. Maybe you’ll get lucky and they’ll decide to raise a family in your yard!