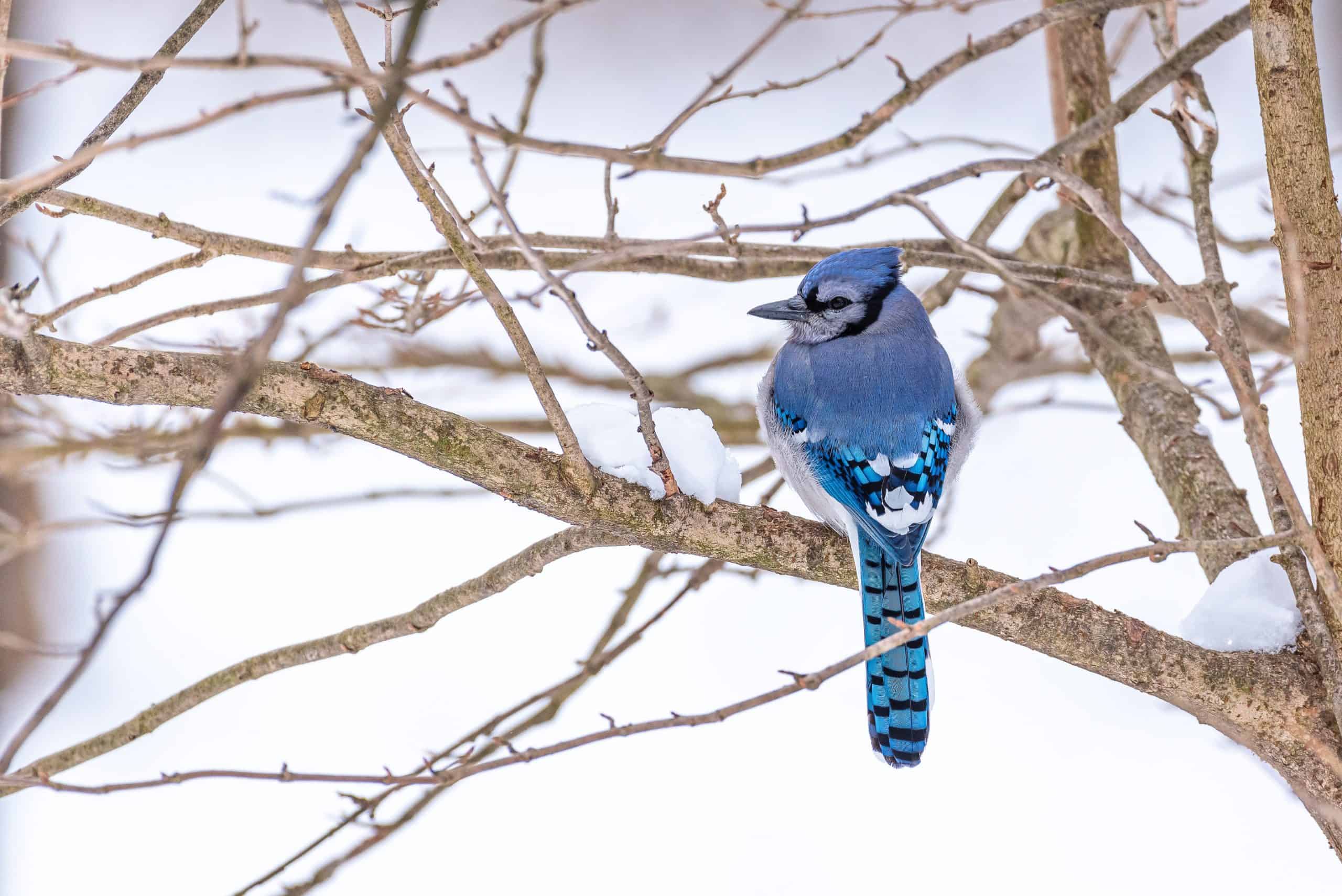 Blue Jays are beautiful birds. If you live in eastern or central North America, you have probably been lucky enough to spot the blue beauties sitting atop a tree or dining at the feeder.

Even when winter rolls around and many of the other wild birds fly south for some winter, it’s common to see the bright blue feathers of blue jays standing out against the snow. That’s because while some blue jays head south for the winter, many others remain in the northern part of their range.

When you see them in winter, you might wonder how they survive. Winter in the northern United States and Canada can get cold. The birds’ food sources must be limited. You may worry that the chirper is not migrating with the rest of its friends.

Does staying up north with you lower its chances of survival? I assure you, the blue jay will probably be all right. There are plenty of ways that they can subsist through the colder months in the Northeast.

Read on to learn more about how blue jays survive winter and their migration patterns.

Before you worry about seeing blue jays in the winter, you should know what they look like. The birds have white faces with black and white markings, but their blue crest, wings, and tail make them easy to identify.

If their color were not as bright, you would not spot them as easily amongst the barren trees of the year’s latter months. In addition to color, they also have particularly curved wings and long tails.

You may also still hear a blue jay’s distinct call in your area during the winter.

Their voices are loud, and without the calls of so many other birds to drown them out, they might be extra prominent during migratory seasons.

Blue Jays also do not fly in groups. If you see one, odds are it is alone. I understand that it might be unsettling to see a single blue jay when it is so cold outside, but even in the warmer months, it would not be flying with friends.

Now that you can confirm that you saw a blue jay in the winter, it is time to look at where you can normally find them.

Thousands of blue jays migrate, but not all of them. So don’t be surprised to see and hear stragglers lingering up north in the wintertime.

There does not seem to be a method to a blue jay’s migration madness. Some migrate, others do not, and some vary from moment to moment.

It seems that most blue jays who do migrate are juveniles. However, there are still adult blue jays that choose to fly south for the winter, as well. Some of them will migrate one year but stay up north the next out of what seems to be a preference.

Where do Blue Jays Migrate to?

The blue beauties that do migrate travel down the Atlantic Coast and the Great Lakes regions to the southern part of their year-round range for the winter.

They have a peculiar migration pattern. Even ornithologists struggle to comprehend whether or not there is a pattern to their migrations.

Professionals continue to search for answers to the blue jay’s migratory tendencies. Many believe that it has to do with the available food sources. Still, this theory does not explain why some stay and others leave.

As mentioned, plenty of blue jays choose to stay in colder areas during winter rather than take the easy route down south. So, they must have figured out how to survive. Let’s take a look at how blue jays adapt to life in the colder months.

Keeping cozy and away from the harsh elements of winter is important for these birds. The winters in North America and Canada can be especially brutal. So, how do blue jays protect themselves from the snow, hail, and slush? They hunker down in trees and rely on biological miracles to keep warm.

They can thank the foliage for helping them survive. The birds find evergreen plants like one of the following trees:

When the weather gets rough or the birds need to settle down for the night, they burrow deep into one of these trees. The greenery protects them from the outside world, keeping them safe as ever.

If you see a blue jay in your yard, you can be sure he has a favorite pine tree to go home to later tonight.

When the temps drop, blue jays invoke a biological miracle to stay warm by fluffing their feathers. It’s an activity many wild birds practice. By ruffling their semiplume and down feathers a pocket of warm air is created and surrounds their bodies. Toasty!

Blue jays also secret oil from their uropygial gland for added insulation. The substance is found near their tail feathers and coats the feathers for more warmth.

Their spindly little legs and feet are covered with scales designed to protect the tissues beneath that would otherwise freeze. And, many birds like blue jays are able to constrict the blood vessels in their feet to keep from getting cold.

Ever seen a bird in winter with just one leg peeking out? That’s another clever biological trick that enables them to keep the other foot tucked into their feathers and warm for a time. Since their head and beaks can get cold as well you may also spot one with his head buried in his toasty feathers.

What do Blue Jays eat in the wintertime?

You may be wondering if blue jays can maintain their same diet through the winter months. After all, a blue jay’s diet consists mainly of insects, and most insects slip into hibernation for the season.

Blue jays struggle a little more than usual to get their fill of protein in the wintertime. However, they are not afraid to put in the extra work. They dig deep to find worms, beetles, larvae, and caterpillar eggs. A delicious critter-based diet like this one promises that the blue jays get a healthy amount of protein, even if they cannot swoop down for insects at their will.

Sometimes, they struggle to find high-protein foods like the bugs mentioned above. If this is the case, they must increase their plant intake. They will eat more seeds, seasonal berries, and acorns.

If you see a blue jay straggler in your northern neighborhood, do not worry. They likely have a reliable food source and impressive foraging skills.

If you offer peanuts at the feeder, they won’t be able to resist and you’d be helping them raise their energy reserves. They especially love whole peanuts. They’ll also eat black-oil sunflower seed, also known for its high-fat content.

Don’t forget – all wild animals need water. Blue Jays are no different. When many sources of water are frozen during this time, offering a source of liquid water goes a long way to help jays survive in winter.

It also allows you to attract more blue jays to your yard and see them up close – which is always a gift.

Bird enthusiasts may be happy to see blue jays adding a pop of color to the otherwise grey and barren winter landscape. Although, if you are unfamiliar with their unpredictable migratory patterns, you may worry when you see one pecking at your bird feeder.

Blue jays have no issue adapting to the winter weather. While many of them do migrate by the flock to warmer climates, some choose to hang back.

Blue jays know the evergreen trees of the north are on their side, and they trust their foraging instincts. You should, too!