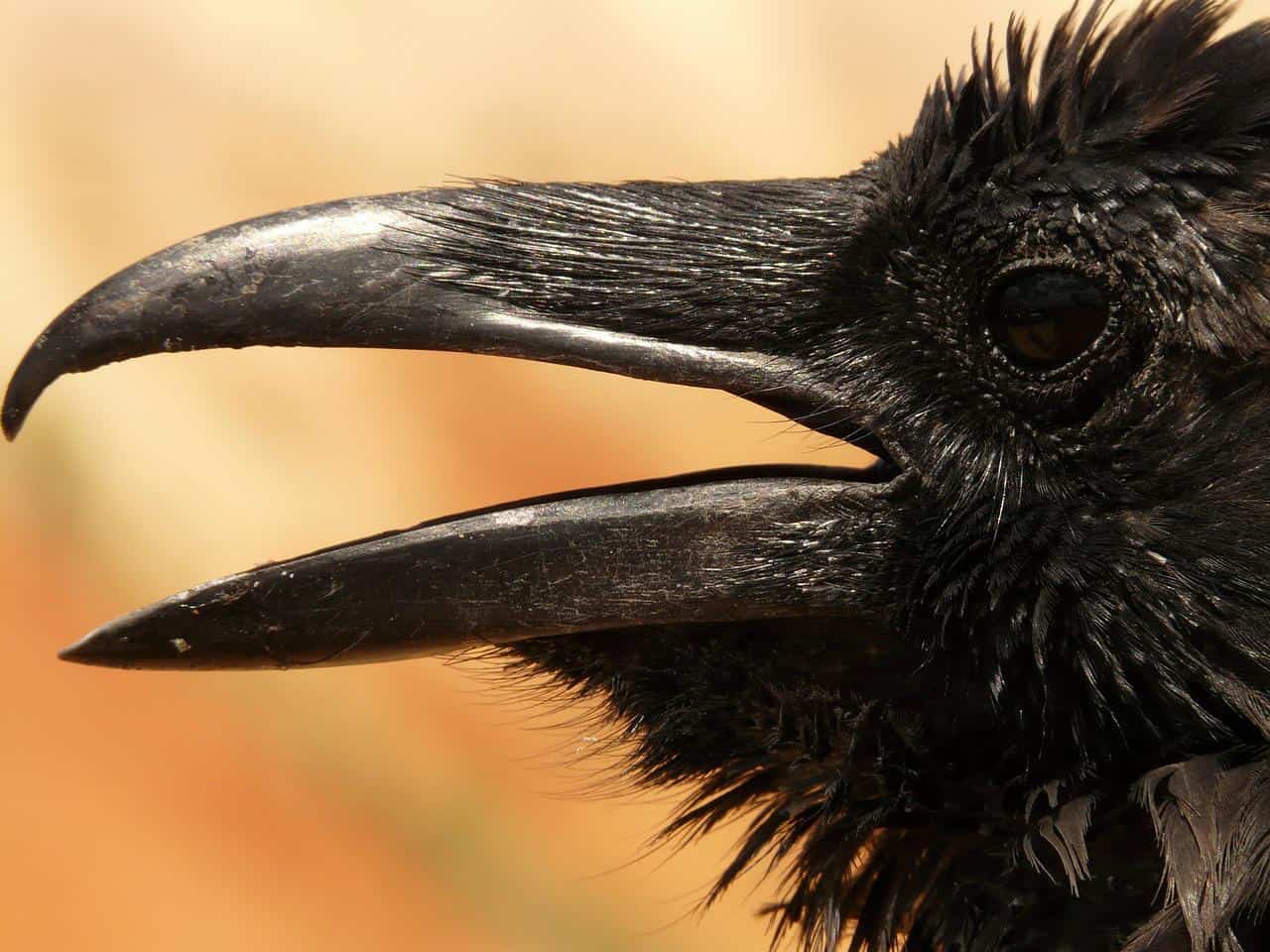 Inside: Discover the answer to “can crows talk”, as well as the anatomy that enables them to talk (oops, spoiler!).

The crow is an indistinguishable bird from the Corvus genus family. They’re known for their cunning intellect, omnivorous scavenging, and signature “caw.”

Crows do indeed have the ability to talk. While they don’t exhibit an actual grasp of the human language, the crow can mimic complex words and sounds.

But how and why do these sleek black birds possess the capacity for human speech? With no close genetic relationship to people, this ability doesn’t appear to hold any evolutionary advantage.

Keep reading as we will cover these topics and more below.

The Anatomy and Reason for Crow Talk

The crow doesn’t “speak” in the same fashion a person would. They have a specially shaped syrinx that allows them to emulate various sounds they hear.

The syrinx functions similarly to the human larynx in how air passes through it, and it vibrates to produce sound. The symmetry of the syrinx allows the crow to produce two different tones at once.

So the why/how can crows talk is pretty familiar. Crows can talk in a similar manner to parrots and ravens, who also have a syrinx that allows them to mimic human speech. Unlike parrots, which people often keep as pets, talking crows are uncommon due to their limited interaction with people.

Given the rules of the survival of the fittest, you’d think that crows use this mimicry in some regard to survival. In a sense, they do. Know that any English words they spit out are entirely meaningless.

It’s important to understand a few things about crows. First, while they can memorize and copy words, they don’t comprehend the actual meaning of what they are saying.

Secondly, crows don’t adapt sounds to communicate with each other. Instead, they use a variety of differently pitched caws to “talk” with each other. They’ll use this to warn each other of danger or indicate food.

You’ll never hear crows have human conversations with each other, and if they do speak words to each other, it’s not a means of coherent communication.

As for why crows that dwell in areas with large populations of humans tend to impersonate bits and pieces of language, it’s usually their innate instinct to blend in with their environment. It could also be a source of entertainment and play for them.

Check out the video below of talking crows. I’m not gonna lie – it’s a bit weird.

What Kinds of Crows Talk?

Two of the most common crows that can mimic the human language are the American crow and the Fish crow. Both of these birds can express words moderately well, though most, if not all, crows can speak to some degree.

As a matter of fact, most members of the Corvus genus possess the ability to mimic language; some are just better at it than others.

The ability of a bird to talk is contingent on many different factors. This refers to the physique of the bird (neck length, beak shape, body size, etc.). It also depends on the functionality of their brain.

Some birds have the physical potential to emulate speech but can’t because of the limits of the brain.

Crows are among the small groups of birds that can imitate language because of their great memory and high cerebral activity. It should be no surprise since they are regarded as some of the most intelligent creatures in the animal kingdom.

Still, despite their great memory and intelligence, the crows still only have a rudimentary capacity to speak. This means that they’ll imitate a word, but they may not pronounce it correctly.

This goes back to the notion of some birds being able to speak better than others.

The parrot, for example, can enunciate and articulate words much more effectively than the crow. This is because the parrot uses tongue movements to manipulate sounds they make while the crow does not.

Some other types of birds that can talk in some sense are:

If you ever experience the rare occurrence of a talking crow, don’t expect a high degree of precision in their speech.

Will Splitting a Crow’s Tongue Allow It To Talk?

Splitting a crow’s tongue does not enable it to talk. That is purely a myth and an extreme one at that.

A crow will inherently have the capacity to talk due to their biology and don’t need any physical modifications. Trying to get one to speak by cutting its tongue is both cruel and ineffective.

While they possess the ability, getting one to speak English is a different matter entirely. Whether or not a crow repeats human words depends solely on how much they hear certain words or phrases and their stage of life.

An older crow with limited contact with humans is less likely to copy and repeat a phrase than a crow who was raised in captivity all its life.

It should also be made clear that crows cannot learn to speak with humans through conventional methods. There could be a “cause and effect” type of understanding but never an accurate discernment of connotations and connotations.

Word meaning and sentence structure mean nothing to a crow’s speech comprehension. Instead, it’s more about correlating certain sounds to actions.

Here’s an example to better illustrate the point:

A crow can be taught that the sentence “chow time” means it’s time to be fed. To them, it’s simply a noise that indicates food (think Pavlov).

If you rearrange those words and say “time for chow,” it’s likely the crow will not make the same correlation and thus not have the same reaction.

Ultimately, human language is highly complex and trying to teach a crow to learn it is futile, despite how smart they are. That being said, they can still learn and repeat certain words and sentences.

Teaching a Crow To Speak

Teaching a crow how to talk may be a bit harder than you think. First of all, keeping a crow as a pet is illegal in the United States without a permit. Crows don’t live well in captivity and require special procedures to be maintained.

The next problem is a crow who isn’t accustomed to humans, such as one that lives in a zoo or a big city, probably won’t stick around long enough to be taught.

So, given the difficulties, if you’re absolutely determined to teach a crow to talk, you’ll be happy to hear that it’s not impossible.

Crows are meticulous creatures that prioritize survival. Consistently leaving out food in the same spot will attract a recurring murder of crows.

Of course, you won’t be able to approach them immediately, and they’ll likely fly away at the sight of you. You can slowly change this by constantly feeding them and making your presence known.

Eventually, you’ll be able to get pretty close to them since they won’t view you as a threat.

That doesn’t mean you should pet them, though. They are still wild animals and will react to you touching them. Furthermore, they can carry germs and diseases that are harmful to humans.

Once you can be in general proximity to them, you’ll have to say what you want them to mimic over and over again. The key here is consistency, repetition, and time.

The video below provides examples of a crow picking up sounds through mimicry.

You’ll have to constantly be saying the exact phrases repeatedly for long periods of time if you want any chance of hearing them talk. Try to keep these phrases simple and once they grow accustomed to you, try using a reward-based strategy to train them.

If you’re adamant, there’s a pretty good chance of getting them to repeat what you say.

Why Have I Never Heard a Talking Crow?

Many people have heard of talking parrots, but fewer have heard of a talking crow. This is because crows aren’t as common in heavily populated areas.

It’s true that they sometimes inhabit cities, parks, and zoos, but they’re more indigenous to forests and fields. There’s a reason why crows are often associated with farms and cornfields; it’s where they’re most abundant.

You can also find them in suburban areas and savannas, but you’ll likely see them more in rural areas with lots of crops.

As demonstrated by the difficulty of teaching a crow to learn English, you can understand why talking crows are so uncommon.

The parrot comes from various places globally, and you’ll only see them as pets in America. Crows are almost always wild animals that many people view as pests. As such, you’ll usually hear parrots talk while solemnly hearing a crow say a word.

If you’re desperate to hear a crow talk, your best chances are at the zoo or in a city with a large crow population.

Crows are interesting and amazing creatures despite their bad rep. Their cunningness and unique biology allow them to perform a number of feats, such as being able to mimic human language.

And while you probably have never heard one talk, it’s genuinely bewildering to know that they can and sometimes do.

Who knows? Maybe someday, you’ll hear one of these majestic creatures say “hello” and know precisely why.