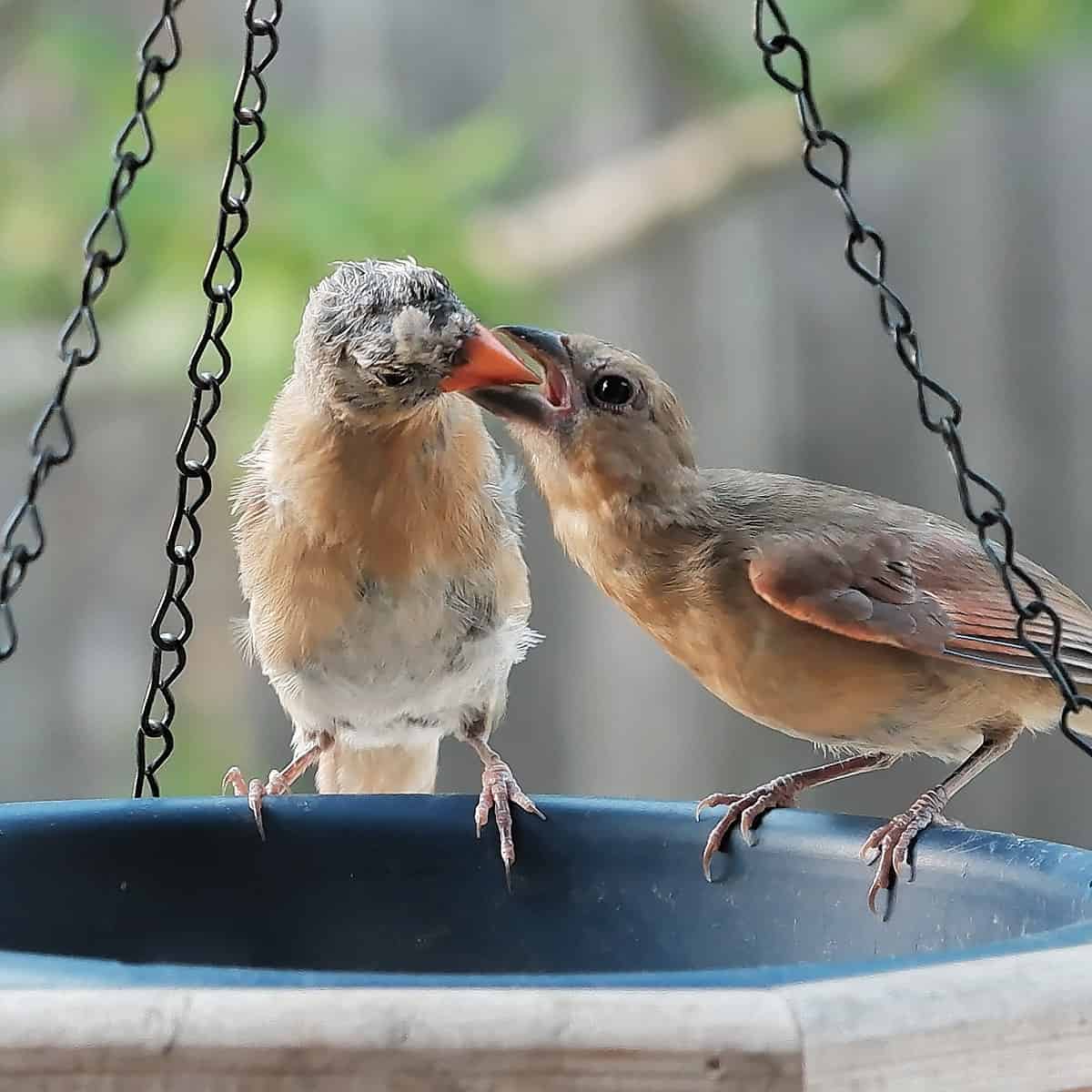 You’ve got a cardinal bird nest and eggs in your yard and want to know how long before they hatch into adorable baby cardinals. Who wouldn’t? You want to be ready for when the magical day comes and maybe even experience the amazing miracle of a cardinal egg hatching in real-time.

Experiencing, observing, enjoying, and researching backyard birds is what I do. I’ve been hosting northern cardinals and many other wild birds in my backyard for over 20 years. Plus I have many bird friends with even more experience to fill in the gaps.

If you’re like me you have other questions about cardinal eggs, nestlings, and perhaps fledglings too. Keep reading – I’ve got answers to all these burning questions. But first, here’s a quick overview of the cardinal nesting habits.

How Often do Cardinals Mate?

While the act of “mating” may only occur a few times in a given season, the female cardinal can lay eggs continually as a supply of the male cardinal’s sperm, stored within the female’s chambers, is continually available to fertilize eggs. Cardinal pairs have between 2-4 broods per mating season with each brood containing about 1-5 eggs each.

Cardinals travel in pairs during the breeding season. Outside that timeframe, they often travel in flocks with other cardinals that may or may not contain their mate.

What month do cardinals lay eggs?

Female cardinals lay their eggs anywhere between February and September – which is a much longer breeding period than most wild birds. During their breeding time, they can have 2-4 broods per season.

Since cardinals do not migrate, they can enjoy a longer season which is a good thing since this particular bird has a rather dismal nesting rate.

It helps to know what cardinal eggs look like so you know whether or not the nest is that of a cardinal.

How long does it take for cardinal eggs to hatch?

Cardinal eggs take between 12-13 days to hatch after the female cardinal begins incubating them.

What does a baby cardinal look like as it’s hatching?

There are no words to describe this miracle. Check out this amazing video of a baby cardinal as it’s hatching.

As baby cardinals move through the development stage they’re referred to as hatchlings, nestlings, fledglings, juveniles, and finally adults.

Right after baby birds hatch they are called “hatchlings”.

Cardinal hatchlings are naked with just a few patches of light down here and there. Their eyes are closed and they are balled up in fetal positions.

After a mere 3 days, the baby cardinal has grown some feathers on its wings and more down. Their eyes are now open.

At this stage, the baby cardinals are referred to as nestlings.

How long do cardinal babies stay in the nest?

Baby cardinals grow very fast and are ready to leave the nest 7-13 days after hatching.

Did you know baby cardinals leave the nest more than once? When they leave for the first time, they’re referred to as fledglings. Fledglings return to the nest for several weeks as they learn to fly and forage.

When they’ve left the nest for the final time they’re called juveniles.

What do baby cardinals look like when they leave the nest?

After about 7-13 days, the baby cardinal has left the nest at least one time and is referred to as a fledgling.

Both male and female juvenile cardinals have brown fluffy down with some streaks of red, a short tail, and a wide, stubby beak.

They look a lot like a grumpy old man with bedhead.

Here’s a sweet video of a newly fledged cardinal.

Both male and female juveniles look a lot like mom cardinal. They’re a buff tan color throughout the body with streaks of orange, subtle red highlights on feathers and tail, and a brown beak. If they have a crown it’s not very big and often lays flat at this stage.

Older juveniles may begin to show a color change in their beaks from brown to black to orange, as shown in the photo.

As time passes, the juvenile cardinal begins to slowly change its plumage. The male juvenile will gradually change from a buff-brown body to bright red and the female juvenile will change to brown with streaks of red. Both cardinals will transform their brown/black beaks to bright orange.

What do baby cardinals eat?

Cardinals primarily feed their babies insects. After the first few days after hatching, parents will regurgitate the undigested insects to feed the babies.

After 4 days or more, referred to as “nestlings”, the baby can begin taking the insects and eating on their own.

After the babies have fledged, referred to as “fledglings”, they’ll eat much of what mom and dad are consuming including insects as well as some feeder fare.

Once the baby fledges (leaves the nest) while both parents will help with caring for and feeding them, it is usually the male doing most of this work while the mom scouts for the next nesting site. That said, as you saw in the video above, mom also feeds the fledglings.

What to feed a baby cardinal bird

Some people ask what they should feed a baby cardinal.

What to feed a baby cardinal is a trick question because no one other than the baby cardinal’s parents should feed it. The only exception is if the baby has been abandoned by its parents or if it’s injured. In either of these cases, you should contact a trained wildlife professional to handle and treat the baby cardinal.

Do cardinals move their babies?

No, cardinals do not move their eggs or babies. They remain in the nest until they hatch and fledge from the nest.

Can I put a baby cardinal back in its nest?

If you’ve found a baby cardinal “nestling” (not yet fledged from the nest) you may return it to its nest.

If it’s a healthy fledgling (just left the nest) and appears healthy, uninjured, and not in imminent danger, you should leave it alone. Do not return him to his nest as he’s likely in the process of developing his survival skills as is normal.

If you’ve found a fledgling (just left the nest) that is unhealthy, injured, or in imminent danger (e.g. being stalked by a neighborhood cat or bird of prey) you can return it to its nest. In the case of an unhealthy or injured baby cardinal, it’s also recommended you contact your local wildlife rehabilitation center for further attention.

When do baby cardinals turn red?

The male juvenile cardinal begins his gradual change to red when he molts (sheds and replaces feathers) the first time. First molting occurs the fall after the baby cardinal is hatched.

Up until the first molting, both male and female baby cardinals take on mom’s coloring – buff-brown body and patches of orange and light red on wings and tail.

Baby cardinals’ beaks transition from black to orange is typically complete by the end of December.

Have burning questions about how and why the male northern cardinal is red? Check out my article Bright Red Cardinals: Is Red Their Super Power?.

When do baby cardinals learn to fly?

The baby cardinal experiences its first flight perched on the rim of its nest, or on the branch supporting the nest when it first fledges (about 7-13 days after they’ve hatched). This initial step can take an hour or more usually taking place late in the morning.

All of the baby cardinals in the nest usually leave within the same hour but can take up to 24 hours.

It can take 10 days or more before the fledgling is able to fly for long periods of time. Before that time it was a series of short little flights as little as 4 feet long. For the next week to 10 days, the fledgling continues to practice flying while their flight feathers continue to develop, and eventually, they’re able to fly longer and further. The tail feathers can take up to 3 weeks to fully develop.

Check out this sweet video of a baby cardinal practicing his flying technique.

Do cardinals return to the same nest for each brood?

No. Cardinals do not usually return to the same nest for each brood.

How long do baby cardinals stay with their parents?

Baby cardinals stay with their parents for about 40 days after leaving the nest. Young cardinals hatched earlier in the season leave their parents even earlier because the parents may boot them out of the territory. Mom and dad cardinal will continue nesting so have more mouths to feed. Sharing the territory with the earlier brood becomes a matter of survival for the later broods so parents have no choice but to send them on their way.

Who wouldn’t want to host a nest of baby cardinals in their yard? It’s a fascinating part of nature to watch mom lay her eggs, babies hatch, and nestlings fledge to become the next generation of northern cardinals.

If you’re interested in how cardinals choose a nesting site and built the nest, check out All About Cardinal Nests & Their Nesting Habits.

Or, jump straight to attracting cardinals with the best bird feeder filled with their favorite food!