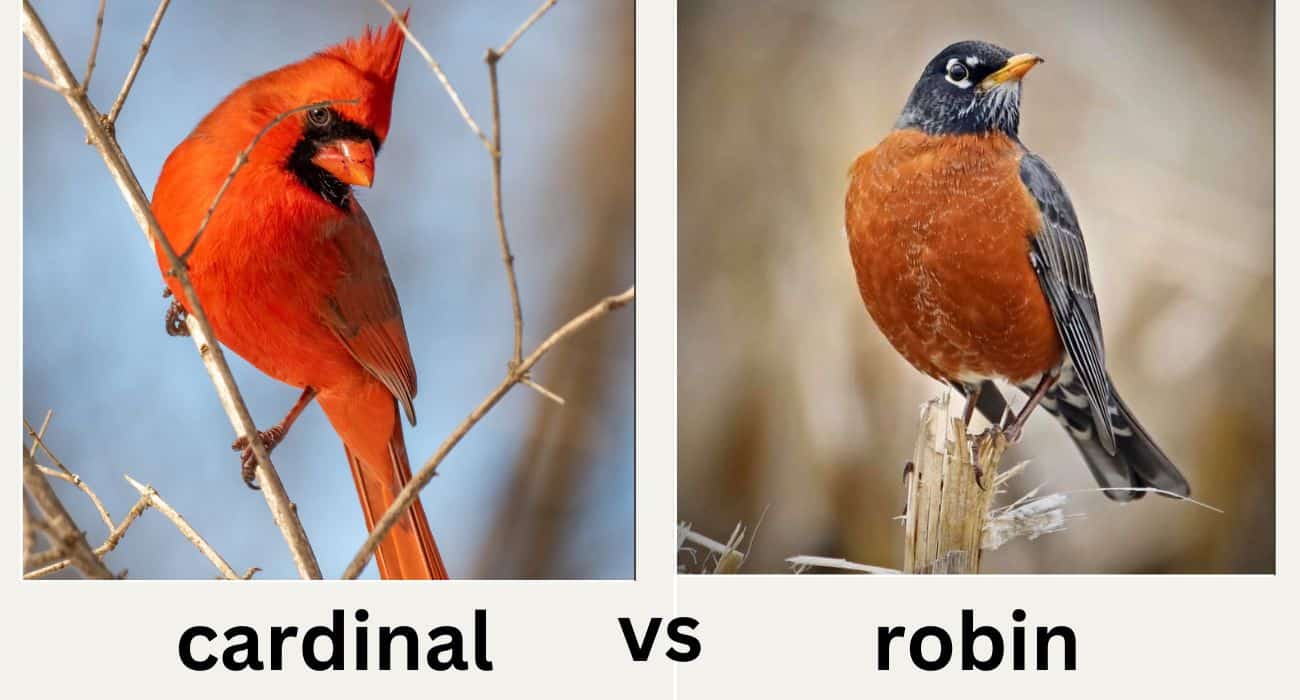 Cardinal and robin differences are obvious and many. They’re two different bird species with very little in common. I put these two birds head-to-head and studied their appearances, behaviors, and habits. The result? A tidy list of 16 key differences between them.

Here are the 16 key differences between northern cardinals and American robins:

Cardinals are an example of sexual dichromatism which is a fancy term for male and female have different colors. The male cardinal is bright red and the female cardinal buffy brown with tinges of red.

The male and female robin are both brown/gray above, orange beak, black round head, and rust-orange breast (the female’s chest is slightly paler).

An inch and a quarter may not see like much to humans but in the bird world – it’s a big deal!

The biggest difference between cardinals and robins is their appearance. There are numerous physical attributes that set the two species apart including the plumage (feather colors), crown, beak, eyes, and belly.

The biggest difference between cardinals and robins is their feather coloration, or plumage. In fact, they couldn’t be more different.

The male cardinal is bright red with a black face and the female is buffy brown with a charcoal face.

The robin has a black head, gray-brown back, wings & tail with a rust-orange breast and belly.

Ever heard the phrase “robin red-breast”?

The American Robin was originally named robin red-breast. This seems odd to me since its breast is more orange than red.

Cardinals have crowns (or crests) that stand tall on the top of their heads. This gives the appearance of a triangle-shaped head. The male’s crown is bright red and the female’s is buffy-brown with tinges of red.

Robins have black, round heads with no crown.

Cardinals have round, black eyes.

Robins have round, black eyes with white strips above and below each eye.

Robins have a round, orange belly.

Cardinals have a more oval shaped belly. The male’s belly is red, the female’s is buffy brown.

Cardinals and robins both live in North America and enjoy similar habitats, but have different size ranges.

Northern cardinals only live in the eastern part of the U.S.

American robins have a much larger range, including nearly the entire continent. Robins live in the U.S., Canada, and Mexico.

Cardinals and robins have different diets.

Cardinals supplement their diet with insects, earthworms and other invertebrates (especially when feeding their babies in spring & summer) but they don’t consume nearly as much insects as they do seeds and fruit.

Robins primarily eat insects, worms and other invertebrates. They also supplement their diet with fruits. Notice the robin’s beak. It’s long and slender, ideal for digging up backyard worms, clamping them in the beak and eating (nom nom).

Since they also eat fruit, their beak design is just the right length that when opened creates the perfect tool for plucking berries off the branch. You will never find a robin chomping on seeds – their beak couldn’t support that activity very well.

You may see a cardinal snacking on a worm but more than likely you’d catch them cracking open a sunflower seed.

Cardinal’s and robin’s sounds are easy to tell apart. Both have a distinctive song and call.

I could try to spell out the sound but how useful would that be?

Click the sounds below and listen for the difference. Audios are compliments of the Macaulay Library.

The female cardinal sings while the female robin does not.

To be fair, it’s unusual for the female of the species to sing. While the females make other sounds and calls, the male is usually the singer in the family. The cardinal family is an exception.

Cardinals are ground foragers so are commonly seen moving about the ground. They hop from one spot to the next.

Robins spend a lot of time on the ground too – looking for earthworms. They take a few swift steps then abruptly stop and look around.

Cardinals and robins establish territories during the mating season but they are very different in size.

The cardinal’s territory is anywhere from ½ acre to 6 acres.

The robin’s territory is usually less than an ½ acre, and they often overlap.

Cardinals always place their nest in a dense tree or shrub. The height depends on which brood in the season (1st, 2nd, 3rd) with subsequent broods’ nests placed higher than the previous.

Robins place their nest in a variety of places, including in a tree or shrub. They’ve been known to establish a nesting site in these locations:

Cardinals eggs are either light gray, light green, or ivory with gray or brown specs

Robin’s eggs are bright sky blue or blue-green, without spots.

12. Cardinal vs Robin as Life Mates

Cardinals and robins are both monogamous. Meaning, each pair remains with its partner during the mating season.

Cardinals take it a step further and are generally considered to mate for life. The pair will get back together each spring to breed and raise another set of young.

Robins on the other hand do not mate for life. Once the breeding season is over there’s no expectation they’ll pair back up next spring. It does happen, but it’s the exception, not the rule.

Cardinals do not migrate but robins do.

Robins also have a year-round range where a population of the species remains all months of the year. However, many of them do migrate. In spring they head north into Alaska and Canada for breeding. In the fall they head south, some as far south as Mexico to spend the winter.

Cardinals live for about 3-5 years.

Robins only live for an average of two years.

Northern cardinals and American robins belong to different family groups. This further highlights that the two birds are more different than similar since families are categorized based on physiological and genetic similarities.

Cardinals belong to the Cardinalidae family.

Cardinals and robins are common backyard visitors – but in different ways.

Cardinals will visit a bird feeder and munch down on the birdseed. Robins do not visit bird feeders (unless you fill them with juicy worms!).

Instead, robins will hop around your yards and gardens in search of insects and other tasty invertebrates.

Overview of Cardinal vs Robin

The table below summarizes the obvious differences between the northern cardinal and American robin.

If that’s not enough, consider the biggest differentiator: their appearance.

The plumage between these two birds are vastly different as well as the crown/no crown, beak, eyes, and belly shape.

Robins also have a larger range which means more people get to see this bird than the cardinal.

They have different diets, move about differently, and lay different colored eggs.