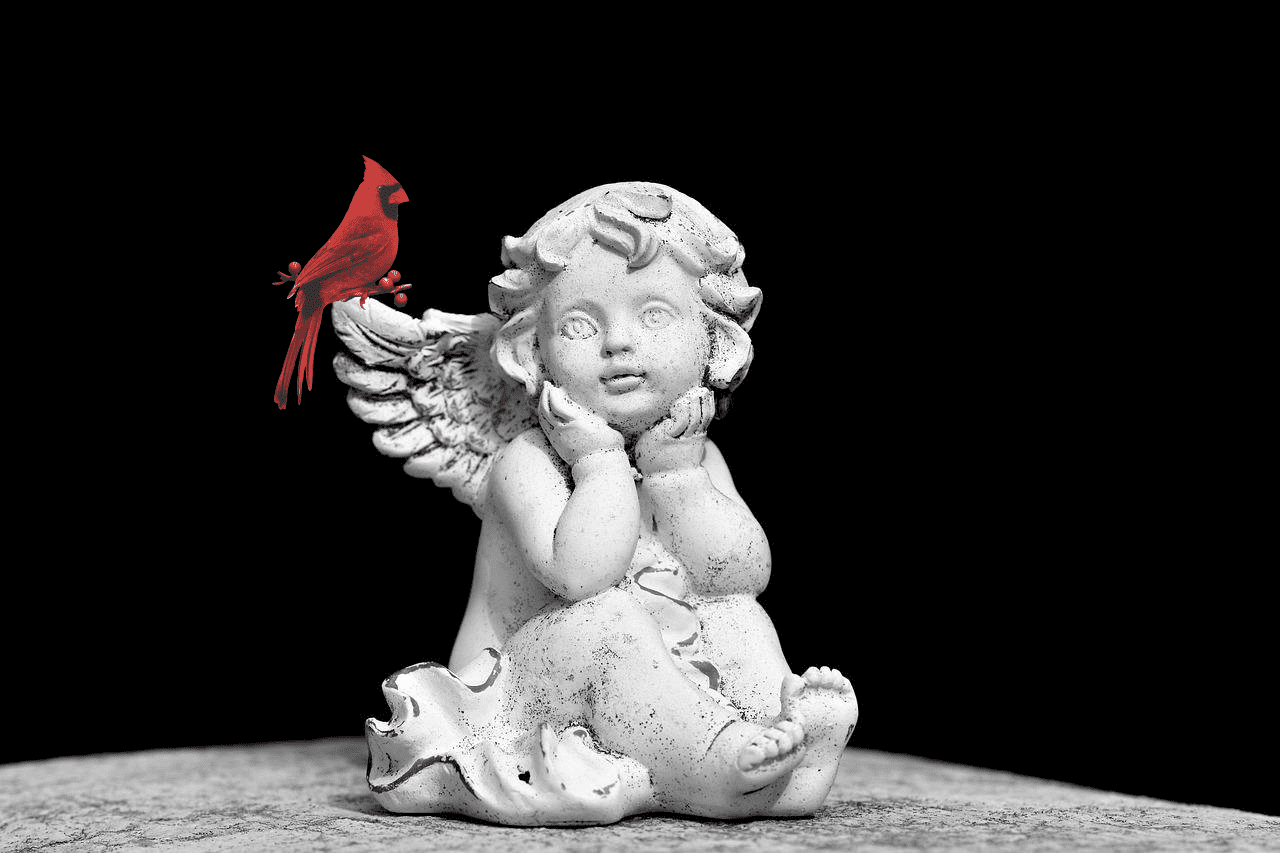 The relationship between cardinals and heavenly beings spans centuries. If you’re lucky enough to live in an area with cardinals, then you’ve probably heard someone mention cardinals and angels.

You’ll soon learn why cardinals and angels are so dear to my heart.

“When cardinals appear, angels are near.” Sound familiar? The most common spiritual belief people have about cardinals is that they represent a loved one who has passed away. Seeing a cardinal is a sign that your departed loved one is dropping in to say hello.

A visit from a cardinal may be a sign to some that a person who died is still present. The belief doesn’t require that the bird lands near you. Most people who think of cardinals as representations of the afterlife believe that just seeing a cardinal is a sign from beyond.

This belief is not related to reincarnation. People don’t think that their loved one is now a cardinal. Instead, they believe that their loved one is using the cardinal to communicate a connection from the afterlife. There is not an exact meaning attributed to a cardinal sighting. It is more of a general way for someone that has died to let you know they are still present.

This belief brings many people comfort. Cardinals are native to a large area of the Eastern United States and Mexico. That means millions of people in these regions encounter cardinals in their day-to-day lives. If you’re a grieving person, then the sight of a cardinal may comfort you. It can make you feel a connection with a person you’ve lost.

Where did the belief about cardinals and angels originate?

The first link between cardinals and otherworldly beings is found in Native American cultures. Tribes that lived in areas with cardinals had many myths involving these bright birds. Cherokees believed that the cardinal was a representation of the Sun’s daughter. While other tribes thought of the cardinal as a sign of luck or romance.

In most instances, the cardinal represents a beacon of something good. There are no known myths or legends that link a cardinal sighting to something ominous or bad.

When the European Catholics arrived, they found the bright red coloring and pointed feathers reminded them of the clergy members called Cardinals. They named the birds after these clergymen.

The red coloring of male cardinals reminds people of the Christian faith about the blood of Jesus. The symbolism of Christ’s blood represents eternal life.

When you look at all these links between cardinals and religion, it’s easy to understand how the bird came to hold spiritual meaning. Cardinals represented luck and romance to Native cultures. To Europeans, they represented faith and the afterlife.

Why is the belief about cardinals and angels so popular?

The phrase “when cardinals appear angels are near” was written by an American poet named Victoria McGovern. The line is from an untitled poem that is meant to comfort people that are grieving. The full context of the line can be seen from this snippet of the poem:

May you come to find comfort in and remember-
Cardinals appear when angels are near.
So go now, sit outside and drink your tea.
Keep a look out for the little red bird-
It is there your loved ones will be.

This poem became a popular reference for people who needed comfort after the death of someone they loved. The poem was written on merchandise marketed toward the grieving. Over time, the phrase became more and more well-known.

Currently, you may see this poem quoted on signs inside funeral homes, or on cards meant to bring someone comfort. The tie between cardinals and grieving people is strong, and the symbolism is not likely to go away any time soon.

Is it true that cardinals represent angels?

Some people have reported abnormally close encounters with cardinals after the death of a person they loved. There are even videos online of oddly social cardinals landing on a person’s hands or shoulders.

These anecdotal instances have helped to spread the belief that cardinals are a sign from someone in the afterlife. It’s rare for a wild animal of any sort to approach a human so closely. This may be why people feel like close encounters with a cardinal are something of a little miracle.

Unfortunately, there is no way to prove that a visit from a cardinal represents an angel’s presence. Believing that a cardinal is a sign of a lost loved one is an act of faith. Like any act of faith, you must be willing to believe without concrete evidence.

Because there is no way to prove whether or not the belief is true, you will have to decide for yourself how you feel about it. There’s nothing wrong with holding onto a belief that helps you feel better about a sad or tragic loss.

In 2019 I suffered the devastating and unexpected loss of my daughter, Kaitlyn. My cousin gifted me a statue of an angel with a cardinal on its shoulder with the poem “when cardinals appear angels are near” inscribed on it. I’d never heard of the poem or the symbolism before. Cardinals live throughout my yard all year long and I’m blessed to be visited by the male cardinal at least once a day. I find comfort in knowing my daughter is still with me. Whether or not it’s really true, it’s true to me and I believe that’s all that matters.

The belief that cardinals represent something or someone from the heavens spans cultures and centuries. Long before the cardinal was given its name, it was thought of as a creature that had ties to the supernatural.

Believing that a cardinal is a sign from people in the afterlife is common. People find great comfort in encounters with cardinals. Sometimes seeing a cardinal can soothe your soul or even help you feel motivated knowing that your loved one is still close.

Cardinal’s relationship to death was popularized by a poem written by Victoria McGovern. Her phrase has been repeated over the years to bring people comfort and closure.
While there’s no way to prove that a cardinal is a sign from beyond this world, there’s nothing wrong with holding such a comforting belief. Cardinals are beautiful birds that brighten everyone’s day, regardless of your personal beliefs.