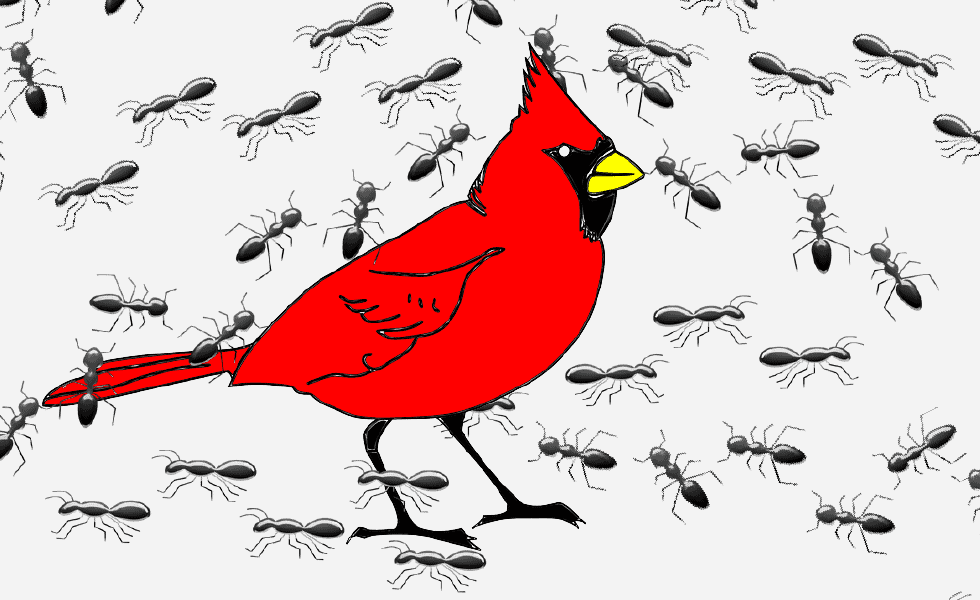 Inside: Learn why cardinals like to cover themselves in ants, when & how they do it, as well as the danger associated with it.

Animals are full of resourceful behaviors that astound us. Cardinals are no exception to the rule. For example, have you come across a cardinal covered in ants and wondered what was happening? The answer is an aviary phenomenon called anting.

Anting can look strange, and we may even wonder if the bird is in danger. But don’t worry. The birds know precisely what they’re doing.

Anting is when a bird purposefully seeks out ants to cover itself with. Anting is not just unique to cardinals. Other birds of many species participate in this strange ritual.

Anting has been observed in different bird species around the world. Some birds use anting substantially more than others. The exact reasons surrounding this behavior are unknown. Scientists have researched birds that cover themselves in ants and made educated guesses for why they are doing it.

How Does a Cardinal Cover Itself In Ants?

Cardinals will approach a mound or marching line of ants. There are two ways they will cover themselves with the ants. In passive anting, birds will lie down on an ant mound and spread their wings. Passive anting allows hundreds of ants to cross over their bodies.

Active anting is when a bird takes action to encourage the ants to climb on. For example, some birds will pick up individual ants in their beaks and place the ants among their feathers. Others will make bathing motions to move the ants onto their bodies.

It’s most common to find a cardinal using the dust bath approach to cover themselves in ants. Cardinals seem to know just how many ants they want on their bodies. They will move away or begin pulling the ants off when they’ve had enough.

When Does a Cardinal Participate In Anting?

Anting is still a bit of a mystery to ornithologists. There doesn’t seem to be a pattern regarding when a cardinal decides it’s time to cover itself in ants.

Because ants are not active during colder months, anting is most likely to occur in Spring and Summer.

Where Do Cardinals Cover Themselves With Ants?

Cardinals are found in over half of the United States. Their range extends through Mexico and into Central America.

Cardinals will participate in anting anywhere the right ants are available. There is no specific climate or region that is needed for anting. This behavior has been observed in many species of birds around the world.

Why Do Cardinals Cover Themselves In Ants?

Even though the behavior of anting isn’t well understood, researchers have a few hypotheses about why cardinals do it. Here are some of the most well-accepted reasons behind anting.

The most well-accepted reason for anting is related to an act of grooming. Cardinals accumulate many microorganisms in their feathers. These organisms can range from fungi to parasites.

The ants that cardinals cover themselves with secrete a chemical called formic acid. The formic acid is thought to work as a fungicide and insecticide.

Check out the video below demonstrating a crow performing the “anting” activity.

In a nutshell, the birds use the ants to kill off any parasites that live on their bodies.

This behavior is found in at least one species of bird, the European Starling. Not all birds that participate in anting eat the ants. Anting may have several different benefits.

This reason is one of the least studied reasons for anting. The sensory hypothesis says that birds cover themselves in ants simply because it feels good.

Using other creatures for sensory stimulation is not unheard of in the animal world. However, any stimulation cardinals feel from anting is likely secondary.

Molting is a stressful time for cardinals. The act of shedding their feathers and growing new ones is energy-consuming. An imperfect molt can result in infections or even death.

Anting may help with molting by making sure the bird’s skin is clear of parasites and fungi. Again, the formic acid from the ants is what scientists believe the birds are after.

What Type Of Ants Are Cardinals Using To Cover Themselves?

Cardinals and other birds seek out a specific type of ant for anting. The ants that birds use come from the subfamily Formicinae. All of the ants within this subfamily are known to secrete formic acid.

Because all of the species birds use for anting secrete formic acid, researchers are confident that the acid plays an integral role in this seemingly strange behavior.

Anting does not seem to harm cardinals or any other birds. Cardinals will use anting when they are healthy and able to quickly fly away if the ants become overwhelming.

There are no documented observations of ants killing birds that are anting. It may seem like a bad idea to us, but the research points to anting as being an act of commensalism. It seems like the birds benefit, and the ants are largely unharmed by the interaction.

Seemingly strange interactions occur between animals throughout nature. Anting is one of the most bizarre behaviors you can witness in a bird. Don’t panic if you see a cardinal covered in ants. Chances are, the cardinal is participating in anting.

Lying down on an ant mound sounds dangerous and painful to us humans. But for birds, it seems to have several potential benefits. The ants pose no danger to the birds, and some birds seem to revel in the act.

Anting isn’t unique to the cardinal species. It’s an act that many different types of birds perform worldwide. We still don’t know whether anting is strictly for food or grooming purposes. What we do know is that anting is obviously helpful to birds.