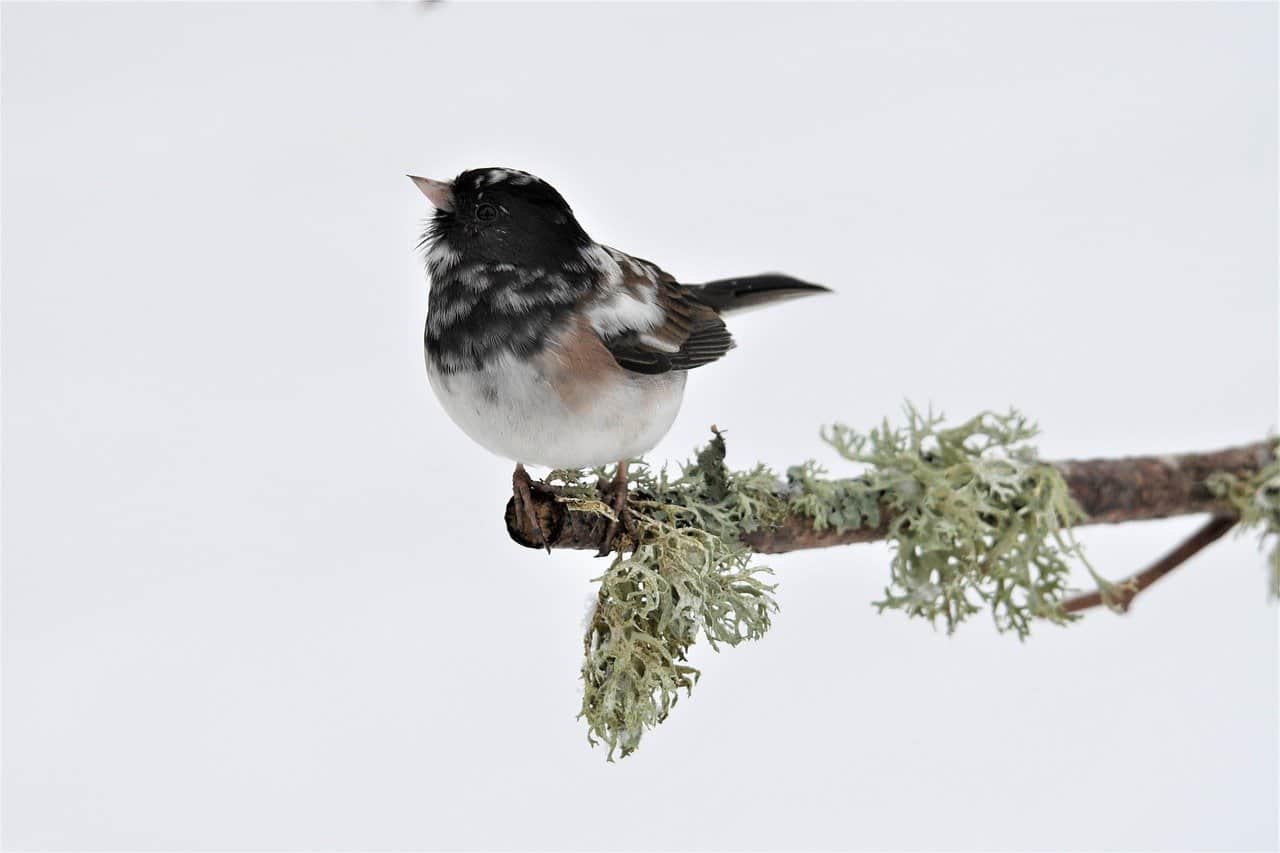 Most of us will experience the lovely dark-eyed junco at some point during the year. These birds live year-round in much of the Pacific Northwest and mountain states, as well as in New England. Juncos spend winters throughout the South and Midwest, serving as an early sign of the arrival of winter. This bird breeds in far northern Canada and Alaska.

Juncos contain fifteen subspecies, all distinguishable by their location or coloring. Varieties like the Oregon junco and pink-sided junco diversify this abundant North American bird species. These petite, sparrow-like birds prefer to feed on the ground instead of a bird feeder, and usually lay eggs in a ground nest too.

How Rare is a Dark-Eyed Junco?

The dark-eyed junco lives at least part of the year in most of the United States and Canada, and northern Mexico.

A petite, ground-feeding bird, juncos gather in flocks of between 15 – 25 birds to forage during the day. A group of juncos is called a blizzard.

Because these birds live in almost every corner of the U.S. and Canada and gather in small flocks, juncos do not rank as rare birds (it’s also easy to attract dark-eyed juncos to most yards). Although ordinary, the dark-eyed junco’s spiritual meaning provides many layers of interpretation and understanding.

The common nickname for the dark-eyed junco is the snowbird. Juncos earned this nickname because they spend winter in the legendary frigid winter climates found in the Midwest and New England, United States. The arrival of juncos signals the start of winter for many birdwatchers.

Because of this important symbolism, juncos are commonly paired with many of the warm feelings and traditions of winter. Artwork featuring a magical first snowfall, holiday traditions, and other scenes feature the junco as a heartwarming symbol of the winter season.

The junco gets its name from Juncaceae, a family of wetland grasses. These grasses, also called “rush,” historically provided many practical uses for several cultures. In England, this plant served as a “rushlight” or burning stalk similar to a candle. Medieval Europeans used the rush plant to make baskets and for insulation. Even in contemporary life, the Irish use rush mats to dry floors during wet seasons. The Japanese use rush to weave floor mats.

The dark-eyed junco borrows its name from this practical, abundant plant with ancient origins. This link demonstrates that juncos are also seen as useful and common. Juncos in your backyard help maintain a healthy pest population, feasting on bugs and flies. This bird presents no adverse effects on humans.

The significant nature symbolism unique to the dark-eyed junco inspires fascinating dream interpretations. Juncos represent positive movement, as messengers to the restful, quiet, festive winter months. Dreaming about a junco during the winter season signals excited anticipation for the season.

If a junco appears in your dream during other times of the year, it can represent several things. Perhaps you are waiting for a message or decision about something important in your life. Juncos may also appear in a dream to motivate the dreamer to take a leap of faith.

This bird is well-known for its captivating communication style. A combination of high-pitched, melodic trilling, buzzing, and short chirps help juncos talk to each other. Experts claim a smacking sound scolds unruly juncos, while an abrupt, explosive sound works as an alarm.

Many novice birdwatchers group dark-eyed juncos with crows, babblers, and finches. These birds rank as fascinating species who use an intricate bird language.

Because this species is so chatty, juncos appearing in dreams may signify a communication need. Maybe it’s finally time to have a confrontation with someone. Or this dream could indicate you anticipate a life-changing conversation is coming soon.

Juncos travel in flocks which symbolize abundance, but the bird’s small size maintains humility with your upcoming good fortune. If you see a junco in your dream, take heart–this messenger typically only has uplifting news to share.

The dark-eyed junco displays no connection to connotations of love. The mating and cohabitation rituals of juncos leave a lot to be desired! After the mating season, males and females spend the winter months far away from each other.

Males compete fiercely for food within these birds’ 10 to 12-acre home range. Females risk a lengthier flight from the Northern Canada breeding grounds to stick to the Southern United States. This way female juncos have a better chance at food and overall survival.

Across the many diverse Native American tribes, birds retain a near-universal spiritual symbolic meaning. Because of their ability to fly, birds symbolize an essential connection between the earth and sky, and what is here and what is beyond.

In addition to birds being a source of spiritual inspiration, dark-eyed juncos provided a source of protein. Tribes like the Rappahannock in Virginia and Canadian Crees dined on the abundant dark-eyed junco. Many tribes especially enjoyed the snowbird’s significant fat content. The Cree tribe near Quebec turned juncos into “white bird pancakes,” a favorite treat for the French and American colonizers.

This small, hopping bird reflects practical, insightful, and abundant messages when you encounter them. Named after a plant integral to the survival of ancient and contemporary cultures, juncos prove their irreplaceability within our natural ecosystem.

Love appears to be one of the only things a junco does not symbolize. The competitive habits of juncos leave little room for romance, and males and females spend most of their lives apart.

When you witness a junco in real life or dream about juncos, prepare for positive and closure-bringing opportunities.