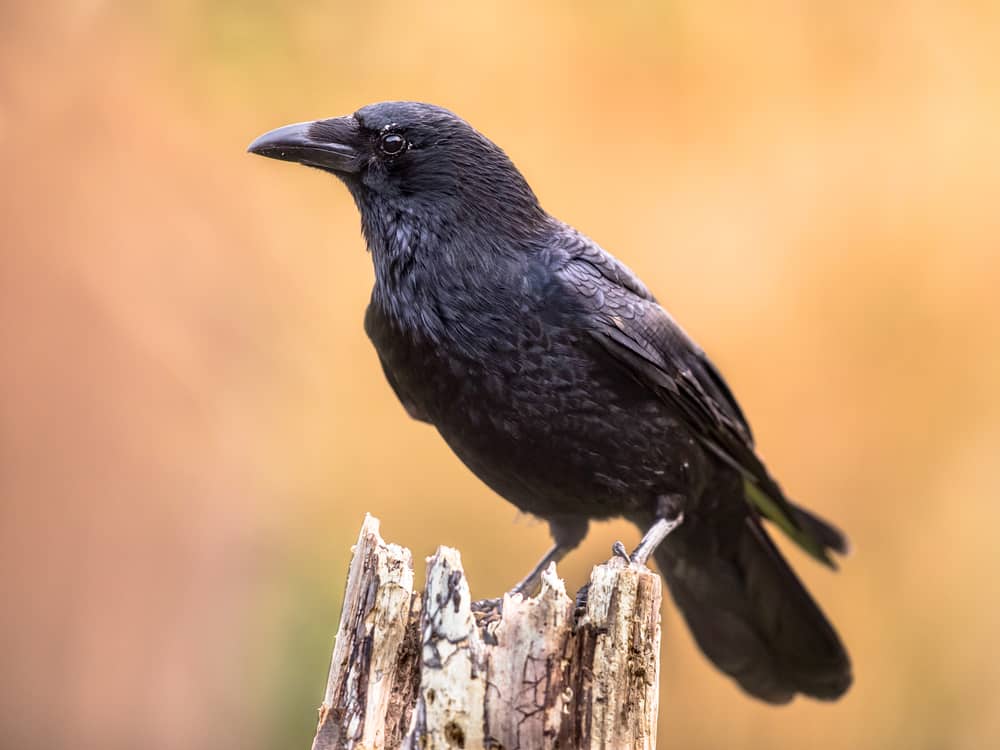 What are the differences between ravens and crows? There are 15 of them! I dove headfirst into the research so you don’t have to! Let’s go!

Many people mistake these two big black birds for one another, but there are some notable differences between them.

This article discusses the 15 key differences between the crow and raven including:

I’ve been a backyard birder for more than 25 years. In that time I’ve seen and heard my share of crows and ravens. Would you believe I never bothered to know the difference until I dove into the research for this article? True. I guess I was more obsessed with the cardinals, bluebirds, and chickadees 😉

Still, it’s fascinating to realize just how different these birds really are! Let’s get started …

1. Size & Weight Are Different for Ravens vs Crows

Crows and ravens are both blackbirds, but a key difference between them is body size and weight.

Which is bigger, a raven or a crow?

Ravens are bigger than crows. Ravens are about 24-27 inches from head to tail feathers and crows are only about 17 inches.

Check out the video showing both birds on the same wire. The quality isn’t the best but it still gives you a great visual.

2. Heads Are Different for Ravens vs Crows

Crows have triangular-shaped heads while ravens have rounded head shapes.

3. Beaks Are Different for Ravens vs Crows

Another way to tell the two black birds apart is by their beaks. Crows have pointed beaks while ravens have thicker, more curved beaks.

4. Tails Are Different for Ravens vs Crows

The raven and crow’s tails are one of the most noticeable differences between them.

5. Plumage is Different for Ravens vs Crows

The raven is a bird with highly glossed plumage that shows iridescent greens, blues, and purples. Sometimes, there’s an oily sheen to the feathers, making them appear even more colorful than they already are.

Raven feathers are also symbols of change and transformation. Check out my article The Ultimate Guide To Raven Meaning & Symbolism <<– click here to discover the many meanings and symbolism associated with ravens.

Crows also possess these color-changing traits but not as much, so you can tell one species from another by looking at the amount of shine on their respective feathers.

The shiny type will have less reflecting properties while others don’t quite reflect light nearly as much due to either being too dull or having no reflections coming off it.

Compared to crows, ravens have fluffier feathers, especially around their heads.

Both crows and ravens are scavengers, which means they like to eat dead animals. They can also be carnivores, meaning they will eat live prey if necessary. Other than eating the same kinds of food, there are some differences in their behaviors.

6. Social Behaviors Are Different for Ravens vs Crows

Crows travel in groups, while ravens like traveling in pairs.

Do crows hang out with ravens?

No. Crows and ravens do not hang out together. The two black birds do not get along.

According to a study published by Ornithology, crows attack and chase ravens 97% of the time. This is pretty surprising since the raven is much larger than the crow.

7. Cooperative Breeding is Different for Ravens vs Crows

Cooperative breeding refers to the parents and their offspring helping to raise other offspring – both siblings and ones that are not their own.

In the case of ravens and crows, crows engage in cooperative breeding while ravens do not.

8. Flying Styles Are Different for Ravens vs Crows

If you were lucky enough to look up in the sky and see ravens and crows, you’d notice their flight is very different. Ravens soar while crows fly.

9. Ground Movements Are Different for Ravens vs Crows

Crows and ravens are different in how they move about on the ground.

For example, crows usually walk around like humans do (never jump about or flap their wings in flight mode like most birds do) for exercise purposes.

Some even say crows walk like supermodels! Check out this video for a chuckle:

A raven will hop from foot to hand then back again with a combination of both methods to get to his destination fast enough without running into any obstacles (or becoming food).

Another difference is that ravens can do somersaults when flying or even fly upside down.

10. Sounds Are Different for Ravens vs Crows

Crows have an even cawing sound they make when communicating with each other or warning other birds about potential danger.

Ravens can also make this same sound, but their most common call is something called a “croaking” noise!. The croaking sound is much throatier and deeper compared to the even cowing sound of the crow. Ravens make this croaking sound when trying to attract a mate or establish dominance over other ravens.

Crows are said to have a vocabulary of at least 250 words. Check out this video of a backyard birder who taught his backyard crow to say “hello”.

Still curious? Check out my article Can Crows Talk? < click here which reveals their unique anatomy which enables them to talk.

11. Intelligence is Different for Ravens vs Crows

Crows and ravens are both intelligent birds.

Which is smarter, a crow or raven?

While both crows and ravens are very intelligent, ravens are smarter. Both birds have the ability to problem solve but ravens are better at it. Ravens actually make tools to help them problem-solve.

In fact, ravens are considered the smartest birds on earth! According to Science Magazine, ravens plan for tasks beforehand just like humans do.

Crows are also intelligent creatures. In addition to problem-solving, they can easily adapt to new environments.

Crows, however, have a sharp memory and can remember human faces.

Crows can recognize threatening people and still be hostile to them when they meet. They have high social intelligence and know every human is different and needs to be approached differently. Often cautious around new people, crows only approach people they have interacted with before.

Do crows and ravens talk to each other?

Wondering why crows attack? Check out my article Why Crows Attack & 7 Ways to Prevent it from Happening to You <– click here. It just may save your life 😉

12. Migration is Different for Ravens vs Crows

As for migration, ravens don’t migrate and live in their year-round home.

On the other hand, crows partially migrate; some crows take the trip while others prefer to stay home.

13. Habitat is Different for Ravens vs Crows

Crows prefer living in open areas, while ravens prefer to live in forests and other wooded areas.

14. Relationships Are Different for Ravens vs Crows

Are crows and ravens related?

Yes. Both birds belong to the same genus, the Corvus genus, but are members of different avian species.

Not all ravens share the same species: for example, we have all types of different ravens flying among us, including the Common Raven (Corvus corax), Forest Raven (Corvus tasmanicus), Chatham Raven (Corvus moriorum), Chihuahuan Raven (Corvus cryptoleucu), and more. These are all members of their own species, but still all corvids and still ravens.

On the other hand, crows belong to their own respective avian species: the American Crow (Corvus brachyrhynchos), the Common Crow, the Rook, and the Western Jackdaw, among others, are all corvids like ravens but are distinctly classified as crows due to their defining characteristics.

15. Geographical Locations Are Different for Ravens vs Crows

The maps below illustrate the range in which the American crow and common raven live.

The American crow inhabits the entire contiguous United States and most of Canada. Some migrate north to Canada to breed while some remain in the U.S. Then in the fall, the migrators head back south to the U.S.

Ravens remain in their year-round range consisting of Canada and the western half of the United States, Canada, Mexico, and a few New England states.

Next time you see a large black bird in or around your yard, consider some of the key differences such as size, movement, or behavior to decipher whether it’s a crow or a raven. Then lean back and enjoy their presence. You just may discover a newfound fascination with these big black birds. I know I did!