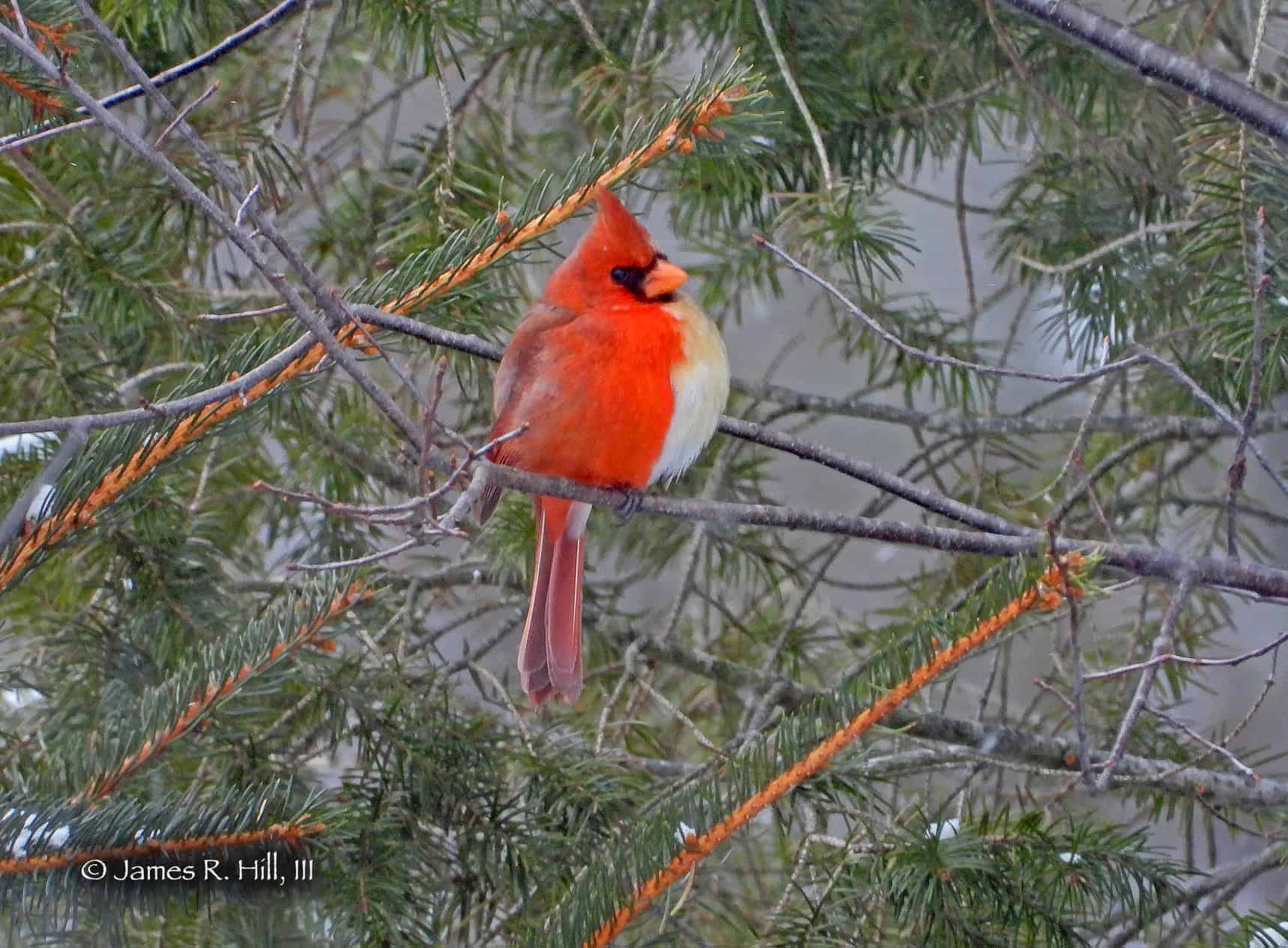 Did you hear about half-male half-female cardinals and wonder if they’re real? Yes! They are rare but very real.

Scientists discovered a genetic mutation that causes some cardinals to have both male and female characteristics, making them appear half-male and half-female.

I’ve been a backyard birder for more than 25 years and have never seen a half-sider cardinal at my backyard bird feeders.  This unusual bird is so rare, I doubt I’ll ever see one in my yard. But I can still dream, can’t I?

Just knowing that half-sider cardinals exist sent me straight into research mode. I had to know more about this bird.

So, I investigated the people who actually spotted them in their yards as well as people in the ornithology community who could share the science behind this phenomenon.

This article is about one of three rare types of cardinals – the half-male half-female. The other two are yellow cardinals and albino cardinals (also known as leucistic birds).

In this article, I share everything I learned and know about these birds + actual photos proving the half-male half-female cardinals are REAL.

The slang term “half-sider” perfectly describes the appearance of this interesting and rare cardinal. It’s half male half female.

Half of the bird’s body looks like the male cardinal with red plumage while the other half looks like the female with her buffy brown feathers. The male parts could be on the left or right with the female being on the opposite side.

What Is the scientific name for Half-Male Half-Female Cardinals?

The official, scientific name for the half-male, half-female cardinal is bilateral gynandromorph. Other scientific terms include:

From the most recent to the earliest sightings, here are the documented instances where the half-sider cardinal was observed.

Jamie shared with me his experience observing and photographing this rare bird. You can find his account on eBird.

In 2019, Shirley Caldwell spotted a bilateral gynandromorph cardinal in her Erie, Pennsylvania yard. Shirley told me “it was awesome seeing this cardinal the first time!”.

Two years later another rare cardinal was spotted 60 miles away in Warren, Pennsylvania by Jamie Hill. Jamie and Shirley believe it might be the same bird!

I decided not to include the bird’s photo because it was deceased.

In 2011, a bilateral gynandromorph cardinal was spotted on South Bass Island (Lake Erie), Ohio. Andrew W. Jones and H. Thomas Bartlett observed the bird as they were banding subjects.

Their report states “Jones made the decision to collect the bird” and transfer to an ornithology research center in Cleveland. In other words, they sacrificed the bird’s life for science.

This bird is so rare I find it very sad they decided to end its life.

A photo of this bird was not available.

In 2008, a bilateral gynandromorph cardinal was spotted in Rock Island, Illinois. News of this rare sighting made its way to two ornithologists, Brian D. Peer and Robert W. Motz, who traveled to the site and observed the bird for 2 years.

A photo of this bird was not available.

Amelia R. Laskey was an Ornithologist and an important contributor to avian science. She banded the rare bird and made an unusual observation as well: the crest was primarily female buffy brown feathers.

While there may have been other legit sightings, they’ve not been confirmed or supported with evidence.

What Causes the Cardinal to be A Half-Male Half-Female?

The cause of the half-male half-female cardinal is its sex chromosome makeup. In non-scientific terms, the cells are mixed up.

The sex cells in birds are called Z and W.  The normal male has two ZZ sex chromosomes while normal female birds have one ZW sex chromosome.

When a female egg cell develops with two nuclei—one with a Z and one with a W—and it is “double fertilized” by two Z-carrying sperm, gynandromorphism occurs.

How rare is a half-male half-female cardinal?

Half-male half-female cardinals are very rare. In fact, bilateral gynandromorphism is rare across the animal kingdom. It’s just easier to spot in a northern cardinal.

Why is bilateral gynandromorphism easy to spot in northern cardinals?

Northern cardinals have sexual dimorphism which basically means the male and female colors are different. The plumage in males is red while the females have light buffy-brown plumage with a white belly.

Most bird species have monomorphism meaning the male and female appear basically the same. Spotting bilateral gynandromorphism in other species of birds (monomorphic birds), is near to impossible.

In their normal state, the male and female look the same so how would the average person notice if one side or the other were different? They wouldn’t.

This would explain why bilateral gynandromorphic cardinals are so obvious when seen.

According to Jamie Hill, the Ornithologist who studied the bird spotted in Pennsylvania, cardinals with bilateral gynandromorphism could theoretically reproduce.

Since the bird is genetically half-male half -female (it has a single testis and a single ovary), reproduction could happen one of two ways:

That said, after The Wilson Ornithological Society observed one bird with Bilateral Gynandromorphism for 40 days, the reality of reproduction may be as rare as the condition itself. The researchers  noted these observations about the bird:

Also, Daniel Hooper, Ornithologist, made this comment regarding the rare cardinal spotted in Erie, Pennsylvania “Most gynandromorph individuals are infertile, but this one may actually be fertile as the left side is female, and only the left ovary in birds in functional.”

This is great news because 5 of the 6 sightings of this rare bird had the female (and her functioning ovary) on the left side.

The rare bird referred to as the half-male, half-female cardinal is real. It’s a rare condition caused by a genetic defect and is known as bilateral gynandromorphism in the scientific community.

In more than 40 years there have only been five official sightings of this bird.

Scientists believe a cardinal with this condition could reproduce but do not have evidence that it’s ever occurred. Since they have both male and female sex organs, mating could occur with a male or female cardinal!

So what do you think? What’s the most unbelievable fact you learned from this article?

If you have seen a bilateral gynandromorphic cardinal and have a photo to back it up, please leave a comment below and let me know!