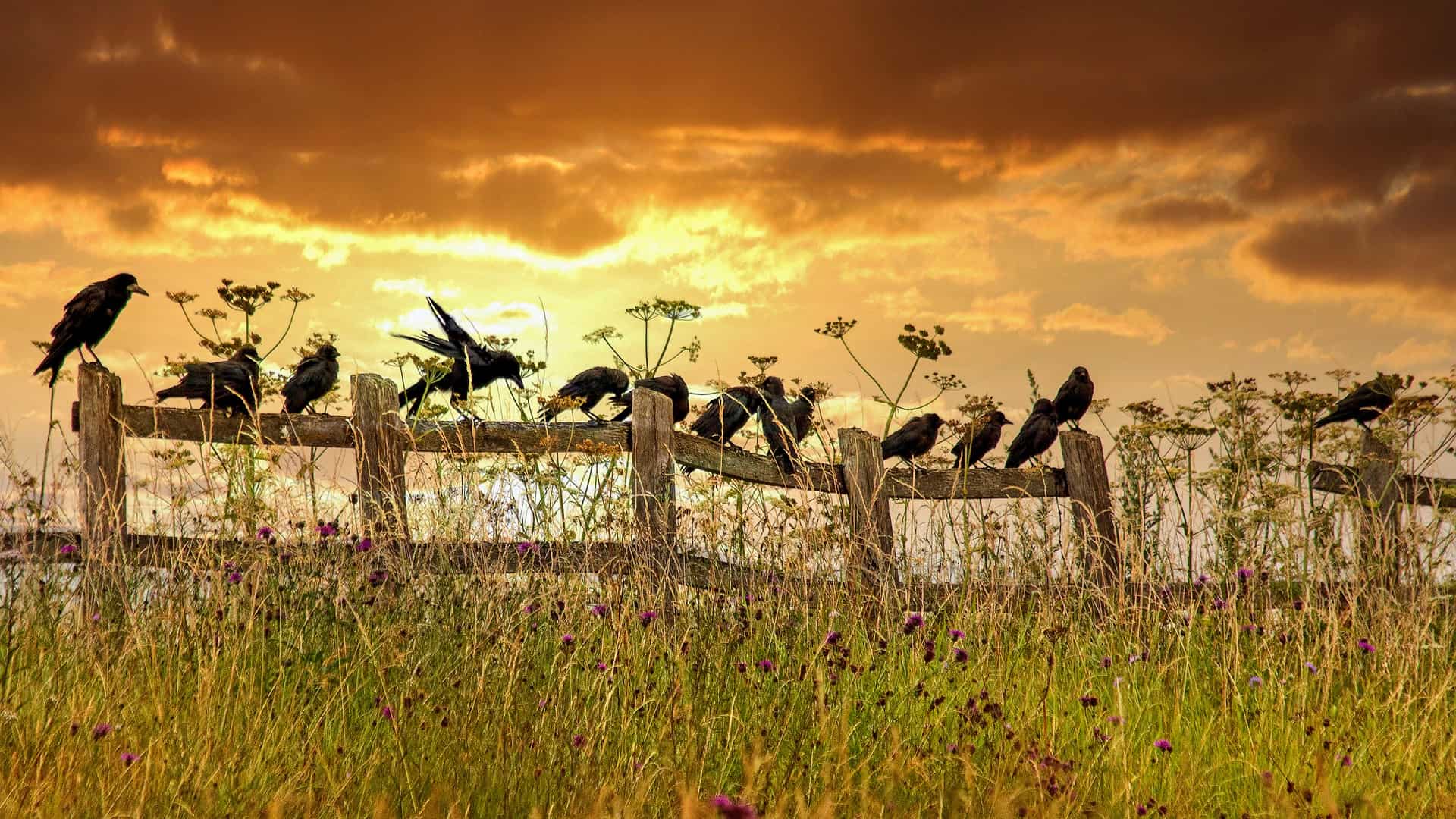 Inside: We all want to know how many crows there are in a “murder” and by the way, why are a group of crows referred to as a “murder”? This article answers those questions and more about the mysterious crow murders.

Nature is rife with collective nouns for its animals. Cats come in clowders and fish travel in schools. You can spot convocations of Eagles and gaggles of geese. In keeping with their sinister appearance, the collective noun for a group of crows is a murder of crows.

However, ecologists agree it takes a certain number of crows to constitute a murder.

So, how many crows are in a murder?

How Many Crows in a Murder?

Despite their various grim associations, crows are social birds. The combination of cawing and black feathers can make people uneasy. But when they amass in cornfields or on fence posts, crows are after a good chit-chat session as much as food.

To spot a murder of crows, naturalists agree that you need to see at least three crows. Anything less and it’s crows chatting.

But are four crows a murder? Absolutely. As soon as you find a congregation of three or more crows, that is a murder of crows.

And if you are in the habit of counting crows, chances are you know someone with a superstitious streak. Why? Because counting crows is not about classifying them as murders or flocks.

Why Do People Count Crows

People who count crows might do it to see if they are looking at a murder of crows, but that is not usually the underlying reason. Counting crows is an old, superstitious tick that goes back hundreds of years.

The most explicit connection to crow counting is from the rhyme, ‘One for Sorrow, Two for Joy.’

Originally the rhyme was used to count magpies, and when you saw a single magpie, you had to spit over your shoulder and say ‘My regards to your wife.’ The belief was that this protected the speaker from rotten luck.

But because magpies are part of the Corvidae family, they also come in murders. And because only a trained eye can tell magpies and crows apart, the superstition evolved. These days the superstitious count blackbirds indiscriminately, whether they are crows, magpies or ravens.

Origins and History of a Murder of Crows

So, that is why we count crows, but what makes them so sinister that their official designation is ‘A murder of crows?’ Why is a group of crows called a murder?

Officially, it is not. A murder of crows is a common reference that dates back to approximately 15th century England. This makes sense because 15th-century England was obsessed with naming and classifying things. Animals, people, flowers, if they did not have collective nouns already, someone coined a new one.

Parsing why a group of crows is called a murder is trickier.

One theory is that a crow’s innate sense of justice causes them to decide the fate of ostracized crows within the murder.

Another reason a group of crows is called a murder is that crows have a long symbolic association with death.

Despite this, or perhaps because of the antiquated roots, scientists no longer talk about murders of crows. Instead, they call them flocks.

How Many Crows in a Flock

You need three crows to form a murder, but flocks of crows have more flexibility. Depending on the season and the location, a flock of crows varies in size from two to eight birds.

Sometimes, you may see even more than this as the weather gets cooler. There are a few theories about why this happens.

Typically, crow chicks are mature enough to leave their nests at four weeks old. However, not all crows do this. Instead, some stay behind and live with their parents, and in some cases aunts, through subsequent nesting seasons.

The remaining young can then help keep the nesting females in food, ensuring their survival for another nesting season.

Another reason murders or flocks of crows increase in cold weather is they are safer together.

Crows don’t have many predators, but they have some. These include animals like:

Finally, flocks of crows increase in numbers late in the year to conserve body heat. It is normal to find murders of crows sleeping in clusters. Usually, a group of three crows to a branch, so that they can be protected from predators on all sides and comfortably fit in tree branches.

If you want to spot a murder of crows, look in the lower tree branches. Crows avoid the crown of the tree because it makes them vulnerable to aerial attack. Instead, they favor low-hung branches.

A sure sign of nesting crows is a tree branch covered in bird droppings.

But with overwintering crow flocks increasing in size, who is in charge?

This video produced by National Geographic is a fascinating deep dive into crows including the origins of a murder of crows.

Crows have remarkable memories. They memorize everything from areas with high food density to places where fellow crows died so they can stay away.

But what does this have to do with whether or not crows have leaders?

The fact is that no bird flock has a designated leader. Typically, leadership gets decided by who flies strongest or fastest. That bird takes the front position in a communal flying trip.

In the case of crows, leadership also hinges on who has the best memory and navigational skill. Since that can change suddenly, so does the crow in charge of the flock.

That said, crows do form smaller family units within their flock. These family units keep the nesting females in food and work collaboratively on nests.

Even in these smaller units, there is no designated leader. Male and female crows share equally in the nest-building process. Similarly, everyone from young to mature crows takes a turn feeding the nesting females.

Are There Words Other Than Murder To Refer to Crows

What is a group of crows called? There are several other collective nouns you can use to refer to groups of crows besides murder. These include:

Scientists estimate that there are more than 28 million crows in the world. That is more than enough for a murder of crows. It is certainly enough for an overwintering flock.

Partly this is the result of climate change. A crows’ adaptability enables them to live anywhere, ensuring they can survive more extreme conditions than some of their more benign contemporaries.

So, next time you see a crow, give your regards to their spouse and take a second look. They are fascinating birds.