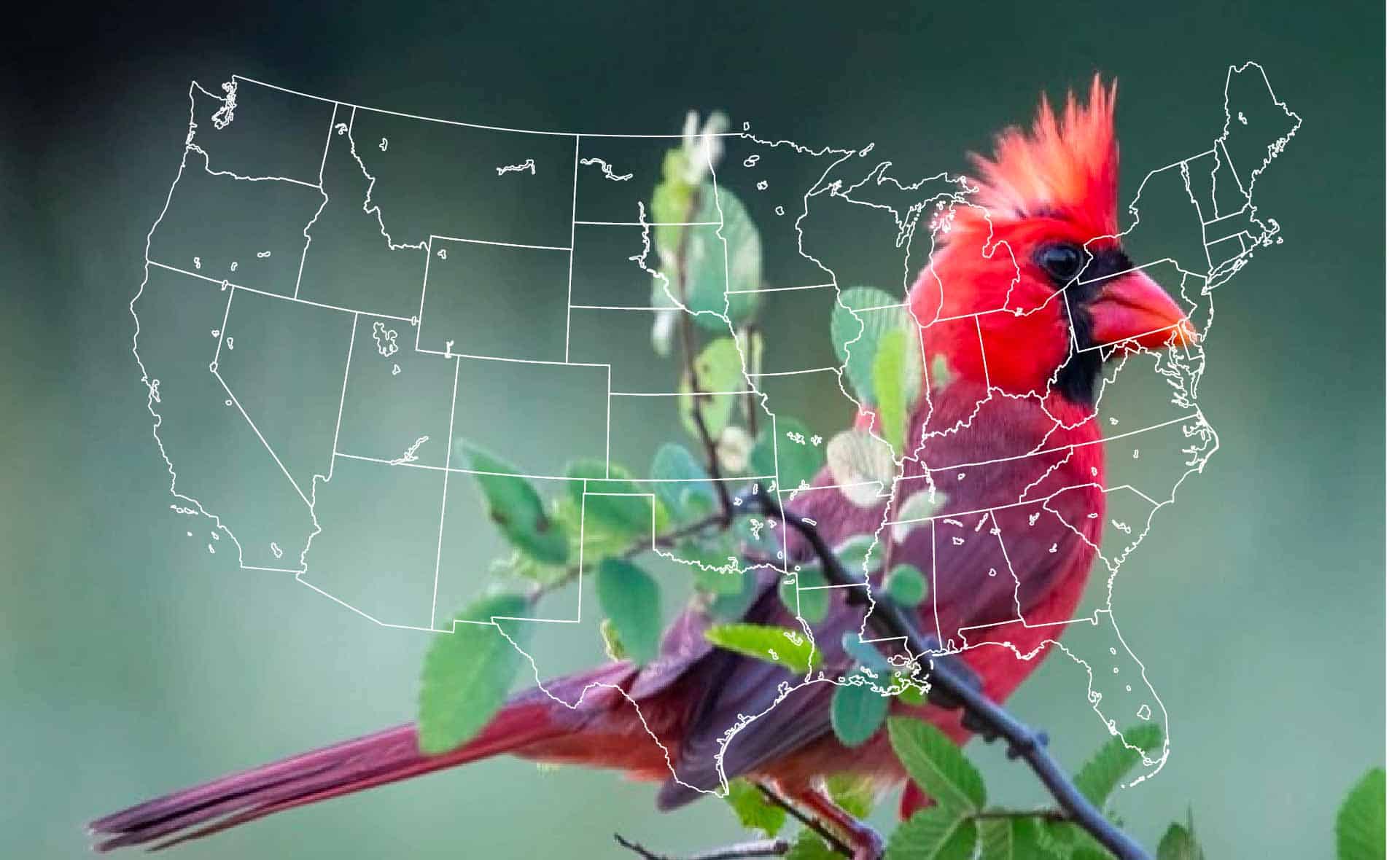 The 7 states that chose the cardinal as its state bird include:

I dug into the historical archives to verify when the 7 states chose the cardinal as its state bird and learn why they selected this bird over all other options. Why they chose the bird isn’t known for all states but I have included the information I was able to uncover and in some cases, we’re given a hint as to why they may have chosen the cardinal. I also ponder why so many states chose the same bird.

But first, let’s meet the bird of the hour – the cardinal.

Overview of the most popular state bird – The Cardinal

The cardinal is technically referred to as the “Northern cardinal” or Cardinalis cardinalis if you prefer the scientific name. For the purposes of this article, I’ll stick with the simpler reference – cardinal.

The ideal habitat for the cardinal is the edges of wooded areas but they also enjoy living in and around thickets, tangled vines, city parks, and even our backyard gardens.

They eat insects, spiders, centipedes, snails, and slugs in the spring and summer. The rest of the year they rely on fruit and seeds for sustenance. They are also fans of the backyard bird feeder and seem to prefer foraging for the food on the ground.

I go into more detail about the cardinal in my article How to Attract Cardinals.

How states choose their state bird

According to 50States.com, each state’s designated bird is voted in via the state’s legislative process. The idea was to choose a bird that “represents the spirit” of that state. Well, apparently, seven states feel they have the same spirit as the northern cardinal.

According to the Wildbird Revolution, there are over 1,000 species of wild birds in the United States. Although the cardinal is an amazing and noble choice, there are 1,000+ other species that could have been considered and selected as their state bird and not chosen by any other state. I’m sure there were some really cool choices in that pool of 1,000 birds.

The 7 States that chose the cardinal as state bird

As mentioned, the seven states that selected the cardinal as its state bird, in the order they officially chose the bird, are Kentucky, Illinois, Indiana, Ohio, North Carolina, West Virginia, and Virginia.

How & When Kentucky Chose the Cardinal As Its State Bird?

Kentucky was the first state to choose the cardinal as its state bird. That was back in 1926.

Per the state’s statutes: The native redbird, commonly known as the Kentucky cardinal (cardinalis), is the official state bird of Kentucky.

No additional information is provided so it’s unclear why Kentucky specifically chose the cardinal.

How & When Illinois Chose The Cardinal as its State Bird?

Illinois chose the cardinal as its state bird in 1929. The school children of Illinois actually chose the bird in 1928 but it was made official in 1929.

How & When Indiana Chose The Cardinal As Its State Bird?

The state of Indiana adopted the cardinal as its state bird in 1933. Although it’s not stated exactly how or why it was selected, the Indiana State website mentions “They remain in Indiana year round” so I think we can safely assume the year-round presence of this bird was a key reason.

How & When North Carolina Chose The Cardinal As Its State Bird?

In 1943, North Carolina selected the cardinal as its state bird “by popular choice“. Although it’s not explicitly stated we can surmise some reasons why the cardinal was selected from a selection of redeeming attributes mentioned on the Indiana Secretary of State website including “most common birds in our gardens” and “fine singer”.

How & When Ohio Chose The Cardinal As Its State Bird?

The state of Ohio’s General Assembly made the cardinal its state bird in 1933.

Why the cardinal was selected is not clear. The Ohio State website mentions that the state’s topography was not ideal for cardinals when the state was first settled in the 1600s, so sightings of them were few and far between. As forests began to be cleared in the late 1800s, the land became more appealing to cardinals and they expanded into the state and were soon widely spotted. Perhaps this gives us clues as to why Ohio chose the cardinal as its state bird.

How & When Virginia Chose The Cardinal As Its State Bird?

According to the Virginia Capital Classroom State Emblems website the cardinal was designated as their state bird in 1950 but there is no mention of the why.

How & When West Virginia Chose The Cardinal As Its State Bird?

The West Virginia legislature adopted the cardinal as its state bird in 1949 after the state passed a resolution authorizing the public school kids and civic organizations to choose the bird. There is no indication as to why they selected the cardinal but again, it’s easy to see why – both genders of the cardinal are irrefutably beautiful.

Since it’s a mystery as to why these states selected the same bird or why they even chose the cardinal in the first place, perhaps you should ask the tourism center the next time you’re in their neck of the woods. It’s unlikely the original people involved in making the decision are still with us (it’s been almost 100 years!) but maybe the history was passed on to someone. If you find out, be sure to drop me a line!