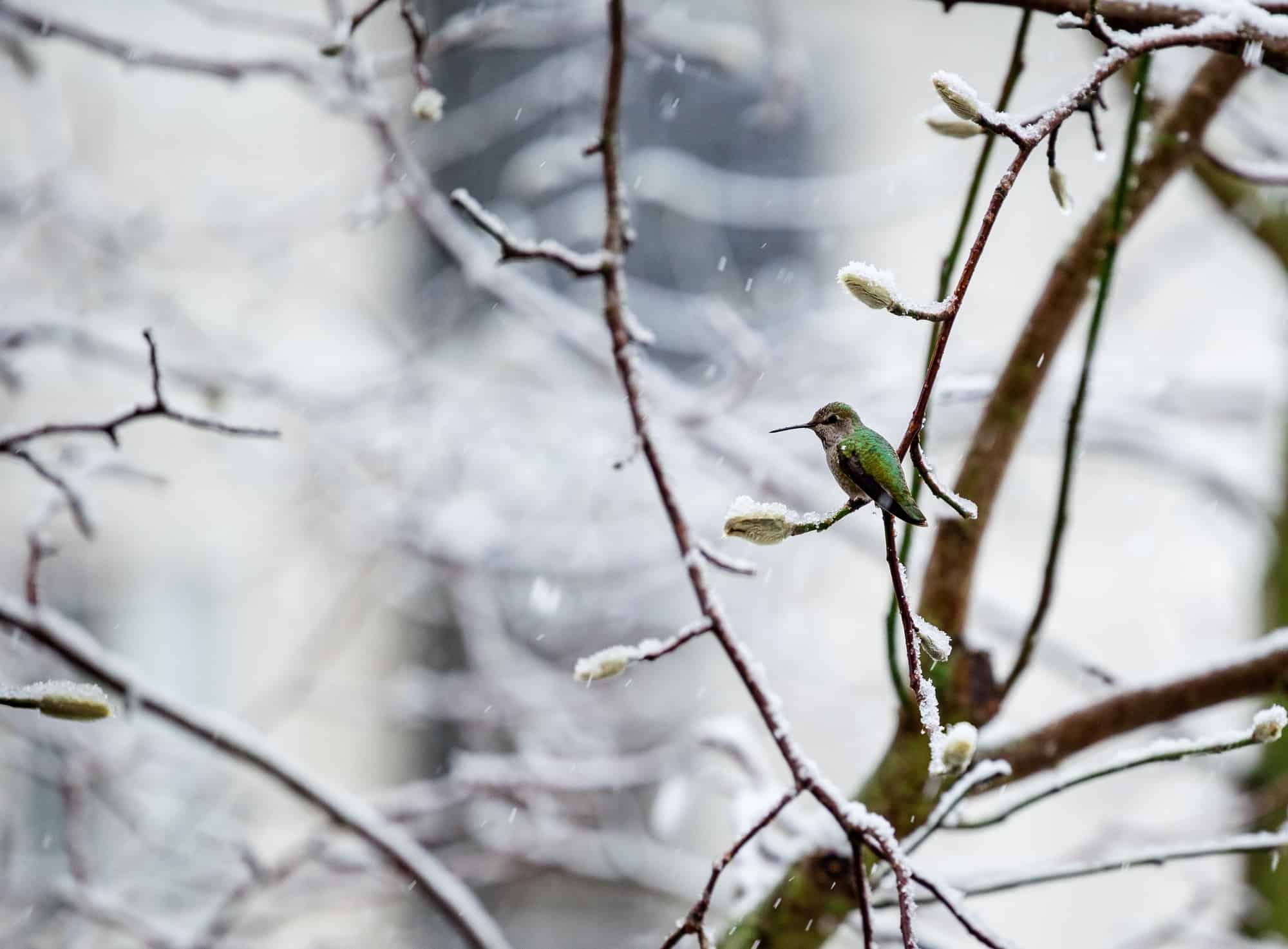 Have you ever wondered what hummingbirds do in winter? What about, how it is they survive when the snow flies and temps drop? Find out the answers to these questions as well as how you can attract them in the winter!

While some species migrate south for the winter months, others stay in the US. Hummingbirds that stay for some or all of winter have various ways to survive colder climates—and even thrive!

I’ve been backyard birding for more than 25 years now. In Wisconsin, we only see ruby-throated hummers and they escape south for the winter. I’ve explored the subject of “hummingbirds in winter” to satisfy my own nagging question “What do they do in winter? Where do they go? Can they survive the freezing temps? to share with you today.

Where Do Hummingbirds Go in Winter?

Some hummingbirds migrate to Mexico or Central America in summer and fall in search of warmth and food sources.

But do hummingbirds come around in winter? You can find various hummingbirds in winter along the west coast, in the desert, and along the Gulf of Mexico. Let’s look more closely at several hummingbird species in the US and where they go in winter.

Ruby-throated Hummingbirds (Archilochus colubris) arrive in U.S. and Canada in spring and make the journey back to Mexico and Central America between mid-July and September. A few stragglers have been seen wintering in southern Florida during the winter, but most don’t stay in the US during the winter.

Rufous Hummingbirds (Selasphorus rufus) tend to arrive in Washington and Canada in May and migrate to Mexico as early as July. Winter populations in the US have increased in recent years, with some overwintering along the Gulf Coast, especially during mild years.

Black-Chinned Hummingbirds (Archilochus alexandri) have a higher habitat tolerance. So, they spend time in the western United States and southern British Columbia during summer and migrate in fall. While many go to Mexico, you may see some Black-chinned hummingbirds along the Gulf of Mexico in the winter.

There are two species of Allen’s Hummingbirds, but both spend all or part of the winter in the US.

Meanwhile, Selasphorus sasin sasin leaves its migratory grounds in December and arrives along California and Oregon coasts in January. So, they also spend a lot of time in the US in winter.

Anna’s Hummingbirds (Calypte anna) live year-round in the area that stretches from Mexico to the British Columbia in Southern Canada. So, you’re likely to find them in the US during the winter.

How Do Hummingbirds Survive Winter?

The hummingbirds that remain in the US during winter months often choose warmer areas like the Gulf of Mexico, the west coast, and the desert to live. However, even those locations can have some cold days and nights. In that case, they enter a state of deep torpor to survive.

Hummingbirds enter a state of daily or nocturnal torpor for hours at a time. In the lab, studies show that they enter into torpor when there is a lower food supply, lower temperature, or shorter period of light. So, they seem to rely on multiple cues to put them into a state of torpor. They go into torpor a higher percentage of the time during cold winter days and nights.

At what temperature do hummingbirds go into torpor? The smallest hummingbirds will enter a state of deep torpor every night, regardless of the temperature, while larger ones vary how deeply they enter torpor.

Studies show that hummingbirds are able to choose how torpid they become depending on whether it provides enough energy conservation benefits. The closer their internal temperature is to the outdoor air temperature, the less energy is necessary to spend on metabolic processes.

A hummingbird in shallow torpor is able to become alert within seconds to escape predators. However, a hummingbird may take up to 30 minutes to arouse itself from deep torpor.

What Do Hummingbirds Do in Winter?

Along the west coast, in desert areas, and on the Gulf Coast, hummingbirds can be active year-round, but most migrate south for the winter.

The birds choose warmer destinations where more flowering plants are available for food than any other place in North America. Species like Ruby-throated Hummingbirds even migrate down into Central America.

Anna’s Hummingbirds start their breeding season in December. So, they actually start building their nests and attracting mates in winter.

Other hummingbirds that return from their migration during winter will also get a head start on building their nests and attracting mates before the competition increases.

What Do Hummingbirds Do for Food in the Winter?

While you may be afraid of the cold, hummingbirds adapt perfectly. They can survive freezing temperatures, provided they have a constant food source.

Some insects are active year-round. Even if a hummingbird arrives at their nesting ground in more wintery weather, they should still be able to find some active insects.

In areas where hummingbirds live in winter, you may still see hummingbirds at backyard nectar feeders even during winter. If you’re lucky enough to live in an area where it doesn’t get too cold during the year, then feeding hummingbirds during winter could become part of your routine.

In addition to bugs, nectar is another potential food source for hummingbirds.

In places like California, Texas, and warmer areas like the Gulf Coast (e.g. Florida), there are plenty of flowers that bloom year-round. Some examples include petunias, hibiscus, and African violets.

There are several plants that bloom in winter, even during a cold snap, that can provide a source of nectar for early returners, including:

Can Hummingbirds Survive in the Snow?

Hummingbirds can survive freezing snowstorms through periods of deep torpor, especially if they’re tucked into a tree trunk or cave where it’s warmer than outside. Torpor allows them to regulate their body heat during cold weather, so they should be fine.

How Do You Protect Hummingbirds from the Cold?

The best way to protect hummingbirds from cold temperatures is to ensure they have plenty of places to rest and warm up.

Wrap your feeder with a towel or blanket during cold weather. Doing this helps insulate the nectar so it doesn’t freeze solid before the little bird can enjoy it.

The warmer the liquid, the better it is for them – especially during a cold snap. A simple way to keep it warm is by putting it in a heat-resistant container such as one made of glass or ceramic. In fact, you can even purchase heated hummingbird feeders.

How to Attract Hummingbirds in the Winter

You can keep your feathered friends safe and warm this season by providing them with the right habitat and food source. A few simple steps will help you attract hummers seven during their downtime:

What Temperature is too Cold for Hummingbirds?

Should You Leave Hummingbird Feeders Out in Winter?

If nighttime temperatures dip slightly below freezing, the sugar in the water should prevent it from freezing. However, for cold weather feeding, it’s best to bring feeders in overnight when it gets cold and return them in the morning. Other options include hanging an incandescent bulb near the feeder or offering a heated hummingbird feeder.

So, what do hummingbirds do in winter? The answer is plenty!

As you can see, hummingbirds have a lot going for them. You can attract hummingbirds with feeders and flower gardens year-round, but they’re also great birds to watch when the snow flies and temperatures drop.