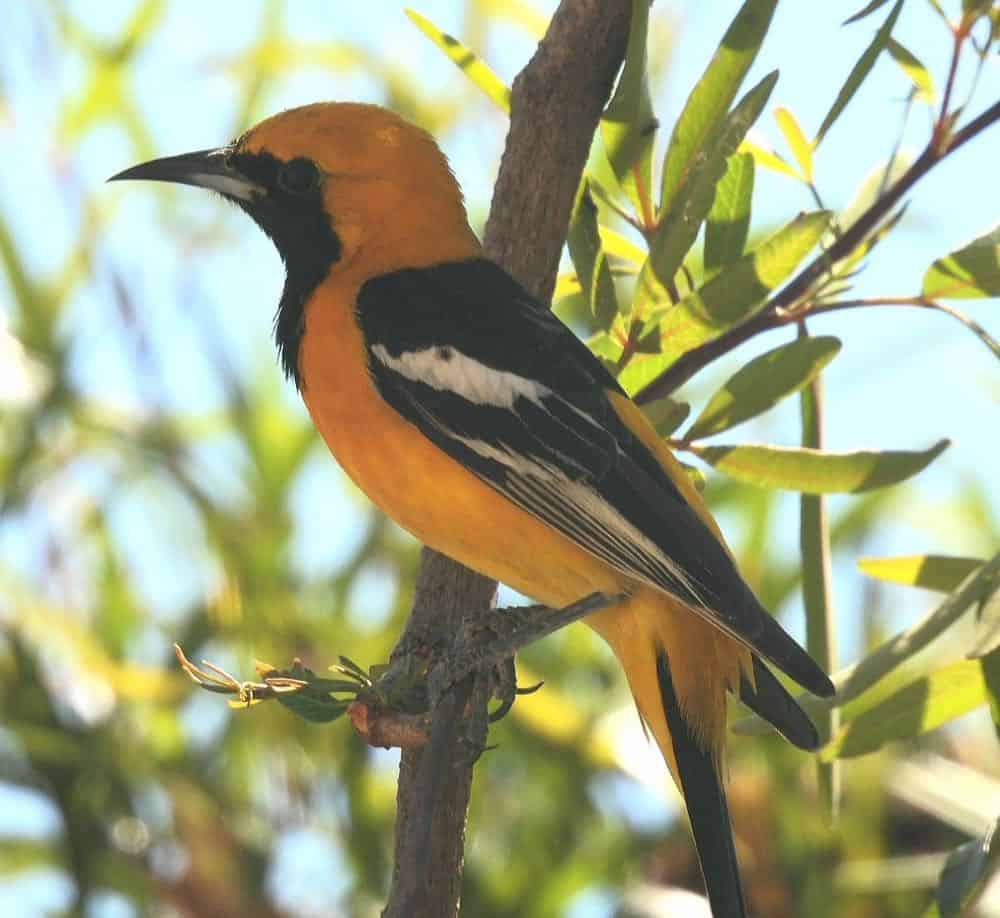 Inside: Dive into the complex meanings and symbolism embedded in the oriole bird, including the meanings of various orioles in South Asia, the Bible, dreams, indigenous cultures, and more!

So-called New World orioles are some of the most beautiful birds you might see in the wild: with the contrast between their inky back feathers and their bright plumage, they know how to stand out in a crowd. If you don’t see them, however, you can certainly hear them. Orioles produce an elegant whistling song that reverberates throughout space.

Orioles have a wide array of symbolic registers in different cultures and places. Generally, orioles’ bright colors of orange and yellow can represent surprise and excitement, and their rich songs can symbolize happiness, stability, and harmony.

What Does a Baltimore Oriole Symbolize?

More broadly, though, the Baltimore oriole can also symbolize resourcefulness, the creation of sacred space, and nurturing.

What Does a Eurasian Golden Oriole Symbolize?

The golden oriole is an Old World oriole whose habitat stretches across three continents: it can be found in Europe, Western Asia, and Asia Minor, and it spends winters in southern Africa.

This peregrine lifestyle means that the golden oriole symbolizes travel and solitude.

What Does a Bullock’s Oriole Symbolize?

Bullock’s oriole was long thought to be identical to the Baltimore oriole, but recent DNA testing has indicated that this is not the case. Nonetheless, it can still be easy to confuse the two species, given that both sport radiant orange, black, and white plumage.

Bullock’s orioles are monogamous, so they symbolize loyalty and truthfulness.

What Does a White Oriole Symbolize?

The white feathers on the white oriole symbolize hidden beauty, purity, and the virtue of hiddenness.

What Does an Indian Golden Oriole Symbolize?

Other Meanings Behind the Oriole

Orioles represent many things, depending on who you ask. The following are some of the most notable ones.

In traditions of modern spirituality, the symbolism of orioles is rooted in both visuals and sound. Seeing an oriole indicates that you have survived the worst and you will soon experience luck. It could represent that someone near you needs some of your joy.

Orioles are connected to Archangel Auriel, so they relate to mysticism, secrecy, and nature. Overall, orioles symbolize simplicity, joy, balance, and positivity.

Orioles do not appear in the Bible per se. However, orioles can belong to either the family of songbirds or blackbirds and those do exist in the Hebrew and Christian Bibles.

Blackbirds are also evoked in the Books of Matthew and Luke when Jesus discusses God’s blessings for Creation.

In the Urdu-speaking cultures of South Asia, orioles can be signs of passion, faith, status, and happiness.

The oriole has rich symbolism in indigenous or Native American cultures. In some cultures, it exists as a guardian of the natural world; in others, it embodies solar energies.

Oriole tattoos can have many meanings, all depending on the context of the tattoo wearer. The most common oriole tattoo might be the Baltimore Orioles team logo, which signifies one’s love for Baltimore and baseball.

Of course, there are many other meanings in an Oriole tattoo. It might also suggest a love of music due to their variable singing behavior.

If an oriole visits you in a dream, it could be an omen of several phenomena. Oriole dreams tend to signify that your luck will soon take a turn for the better or that you will soon experience intense love in your personal life. Depending on other contexts, in the dream, the oriole could also be a sign of family health.

If you have an oriole as a totem animal, you are likely well-connected with your inner child–you feel things intensely, but you also have a great joie de vivre and connection to the pure beauties of life.

The Oriole as a Spirit Animal

Those who have an Oriole as a spirit animal are blessed with warm personalities, a propensity for the arts, and refined humor. Notably, Native Americans’ relationships with animals are different from those of non-indigenous people, so it is more accurate and respectable for the general population to use the term “power animal.”

When you connect to an oriole as a power animal, you connect to tree spirits and others in the faerie realm. It also symbolizes sunshine and positive changes to your projects and life.

The oriole is a creature rich in symbolism and enmeshed in the radiance of the natural world. Now, the only thing left for you to do is to attract an oriole to your home to enjoy its natural energies!