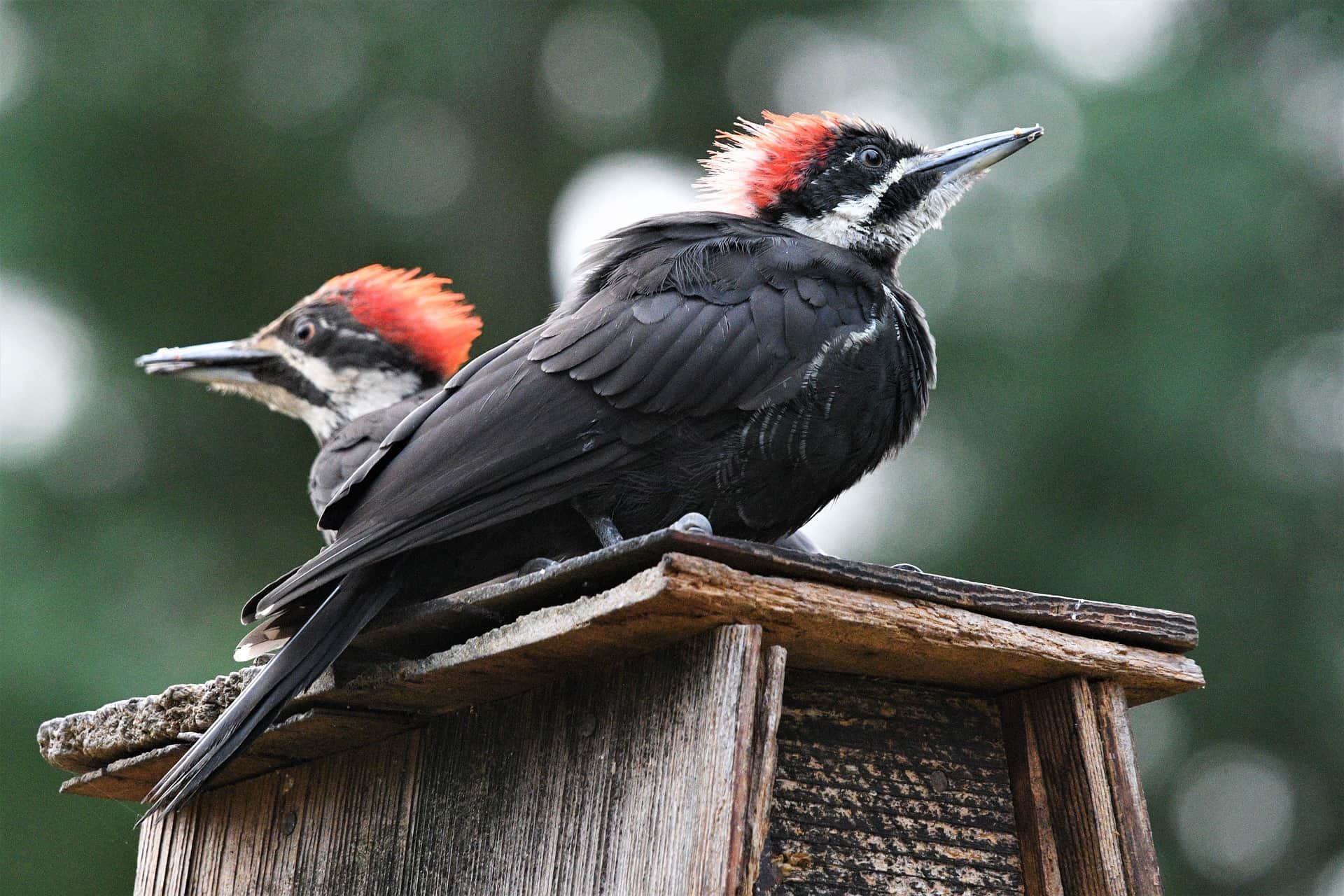 Inside: Pileated woodpecker mating behaviors are revealed including when they mate and whether they mate for life. I also reveal the answer to the ever-popular question “how” do pileated woodpeckers mate. Lots of photos and videos are included for enhanced education and entertainment.

Pileated woodpeckers are a sight to behold. Enormous black bodies accented with white and red along with a prehistoric-looking head. You can help but want to know more about them. So, I dove headfirst into pileated woodpecker research and have some exciting information to share with you.

In this article, I’ll share the Pileated woodpeckers’ mating behaviors followed by the next logical step – nesting.

When do Pileated Woodpeckers Mate?

The birds within the southern and coastal areas of their range begin their breeding season earlier than the northern and higher elevation areas since they can be postponed by poor weather .

Pileated woodpeckers mate for life so as February approaches the pair will seek each other out to begin the annual courtship rituals. Other pairs remain in close contact throughout the winter so finding one another to start the breeding season takes no time at all.

If it’s the first breeding season for the male or female pileated woodpecker they’ll engage in pair formation first.

All of these rituals culminate into eventual copulation.

Drumming is initiated by the male pileated woodpecker. He’ll assume the position on a large hollow tree and tap slowly at first, then faster and faster, ending with slow tapping.

In return, the female may answer with her own drumming.

Here’s a video of a male pileated woodpecker drumming away:

The dancing occurs around a tree. The female will be at a tree when one day the male flies over.

They’ll hang on the tree side-by-side. As if to play a game of hide-and-seek and make jerking motions up, down, and around the tree. Flapping of wings, crest raising, head swinging, hopping, and bowing are also often involved.

This particular ritual may result in actual copulation, but not always.

Check out this video showing the pileated woodpecker mating dance in action:

Singing and calling are also part of the pileated woodpeckers’ mating behaviors.

When heard earlier in the season, February/March timeframe, they’re likely defending their territory. Later in spring, the sound is an indication of the genders calling to one another.

Check out these sample audios of singing, calling, and a duet.

Male/Female Calling Back & Forth

Can you tell the male and female pileated woodpeckers apart? No? You have to check out > Male vs Female Pileated Woodpeckers: 2 Easy Ways to Tell Them Apart.

How do pileated woodpeckers mate (Copulate)?

We already established the mating rituals pileated woodpeckers perform but you’re probably wondering how they “do it”.  You’re not alone! I’ll try to keep this G-rated …

Copulation takes place on a horizontal branch with the female perched crosswise. The male then hops on her back and initiates fertilization. It lasts up to 10 seconds (total).

The video below shows the deed in real-time. For added entertainment, turn up your volume and listen to the narrators.

If you’re lucky enough to have a pileated woodpecker pair in your yard or around your property, make sure to begin listening for their singing and calling in February – or even earlier if you live in the coastal or southern part of their range.

If you live within their range but haven’t seen or heard them, check out my tips for attracting pileated woodpeckers.