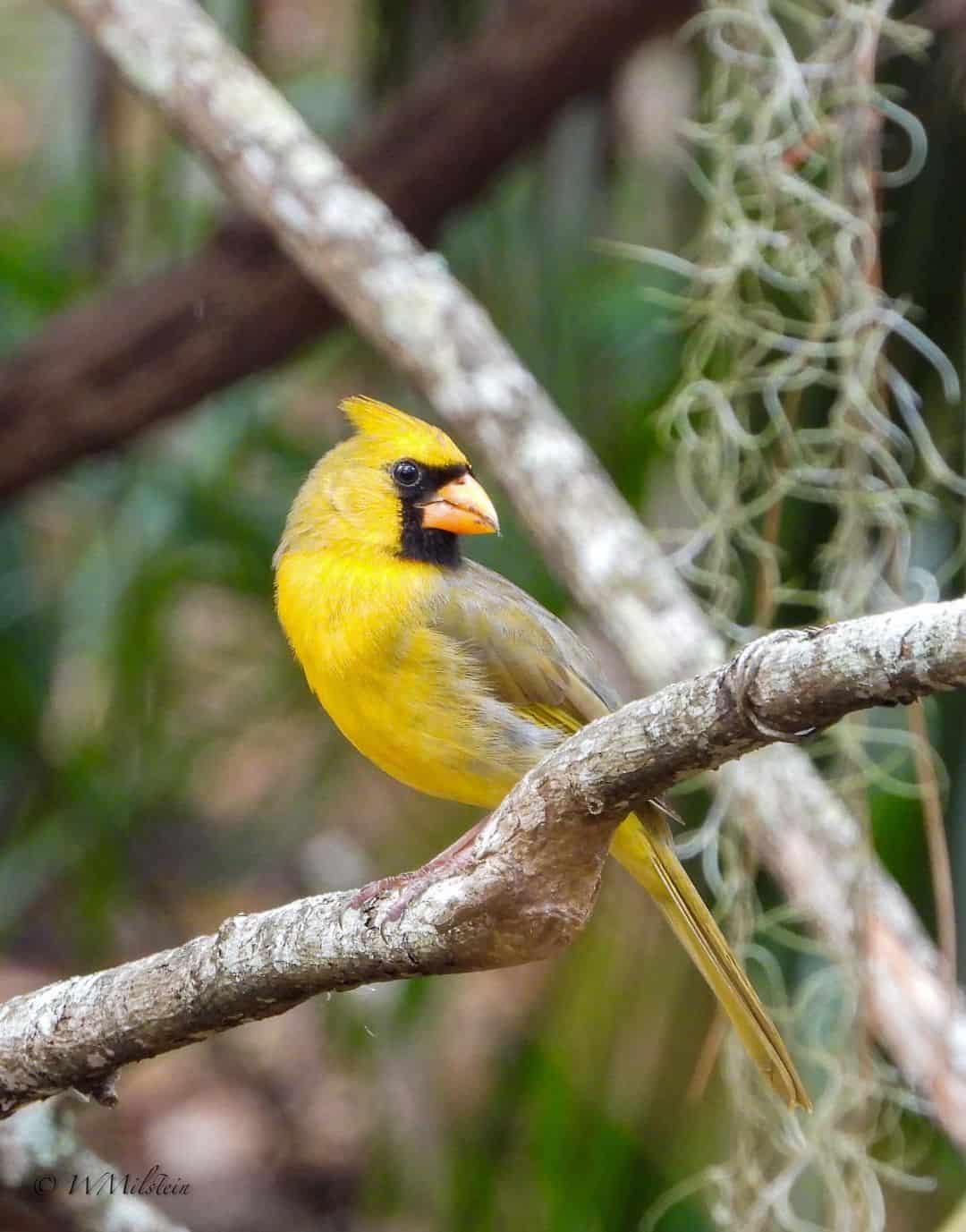 In 2018, a yellow cardinal was reported in Alabaster, Alabama. You might say it was the sighting that brought immediate notoriety to the rare bird. It may have also given validation to all the people who thought they saw a yellow cardinal but figured they were “seeing things”.

Following the Alabaster sighting, much has been brought to our attention regarding this rare bird. First, we learned that yellow cardinals do exist. Then, we learned what causes a northern cardinal’s normal red coloration to be yellow instead.

Are there really yellow cardinals?

Yellow cardinals are real. They’re also very rare and not normal in terms of coloration.

Shortly, I’ll explain the genetic defect that causes some cardinals to be yellow instead of red.

The yellow cardinal looks nearly identical to the normal male cardinal except anywhere red is normally displayed in the plumage, yellow is in its place.

A picture speaks a thousand words – especially in the case of something unusual and rare. Below are videos and pictures of yellow cardinals to once more prove they are real.

Which Cardinal Species is the Yellow Cardinal?

Is a yellow cardinal male or female

Yellow cardinals can be either male or female. Since male cardinals are normally all red it’s easier to detect the genetic mutation in them. Female cardinals have trace colors of red making it more challenging to do so.

Loss of red coloration is the result of a mutation that knocks out the pathway to red pigments.  Females should be just as suspectable to this as males—they are just harder to spot.

What causes a cardinal to be yellow?

A genetic mutation causes yellow cardinals to be yellow instead of red.

As part of a normal diet northern cardinals (and other songbirds & woodpeckers as well) ingest carotenoid-containing foods. Ingesting yellow-pigment carotenoids is relatively easy given the availability of these foods. Foods with red-pigment carotenoids are less available so cardinals rely on a process that converts yellow pigmentation to red.

This process requires an enzyme to make the conversion. Yellow cardinals lack this enzyme thus never converting the yellow to red resulting in the deposit of yellow coloration into the feathers. Yellow plumage exists everywhere red would normally be.

Dr. Hill goes into more explanation in this fascinating video.

Yellow cardinals have been spotted throughout the US and Canada mostly in the east where the cardinal population is abundant. The table below details the sightings that were verified with photos or video along with the year spotted.

Yellow cardinal sightings have also been mentioned for the following areas but I have not found confirmation of them:

How rare is the yellow cardinal?

Many wonder just how rare the yellow cardinal is. Dr. Geoff Hill, an esteemed Ornithologist who has spent his career studying feather pigmentation, estimates that for every million cardinals, one is yellow. You might say your odds of seeing a yellow cardinal are one in a million!

How does “being yellow” affect the cardinals’ reproduction?

I think the question on a lot of our minds is whether or not being yellow affects the cardinal’s ability to find a mate (or more specifically, be accepted by a mate), breed, and ultimately reproduce. This is especially interesting when you consider female cardinals often choose males with the brightest red plumage (this is a key factor in selecting their mate, but not the only one).

In response to a similar question posed on Dr. Geoff Hill’s Youtube channel “Birding Better”, he indicated that at least a couple of yellow cardinals have been observed with a female mate and they did produce babies.  (No word on whether the babies inherited the yellow genetic mutation). Dr. Hill goes on to say cardinals have likely existed with this color mutation since the beginning (millions of years) and there continue to be yellow cardinals.

So although there have not been any scientific studies on this matter to determine the extent to which yellow plumage affects the male cardinal’s reproduction endeavors, we know there are at least a couple out there that were successful.

What does a Yellow Cardinal Symbolize

What does it mean when you see a yellow cardinal?

Since the northern cardinal’s genus is “Cardinalas” and South America’s yellow cardinal is “Gubernatrix” we know they’re not even in the same aviary family. Ironically, they do have some resemblance – especially the classic crest.

It would be a one-in-a-million thrill to see a yellow cardinal. Most of us will never see one – the odds are against us. Given that the condition is abnormal, I’d say it’s a good thing there aren’t more yellow cardinals to see. What do you think?