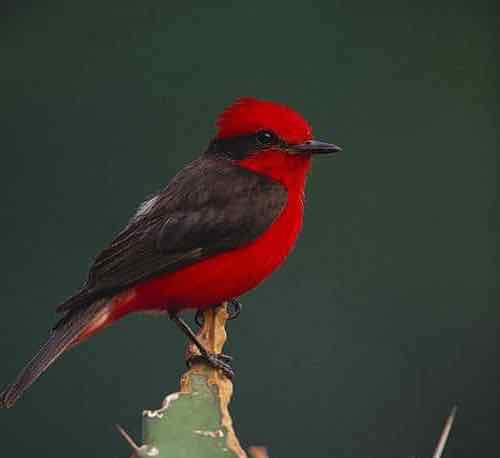 You saw a small red bird but know it’s not a cardinal – so what is it? It’s natural to want to identify the small red bird you spotted and the good news is there are less than a dozen small red birds throughout the US and Canada so identifying your bird should be easy.

Hopefully, you’ve either captured a picture of the small red wild bird or remember its unique characteristics so you can identify the species. If not, make a note to remember the details of the bird for the future.

With more than 25 years of experience attracting backyard birds to my yard (Wisconsin), I’ve studied all of the small and large red birds in my area so I know exactly which bird species you may have spotted from my area.

For the small red birds outside my area, I rely on my trusty sourcebooks and friends at The Cornell Lab of Ornithology to guide me.

There are several small red birds, that are not cardinals, including:

To be clear, the small red birds I’ve included are either all red or primarily red with other colors besides.

How to identify a Small red bird

The easiest way to identify that small red bird you saw is to make note of whether the entire bird was red or only parts of it. If a part of the bird was red, note which parts were red and what colors were the other body parts including head, breast, wings, and tail.

Usually, color attributes are enough to identify the small red bird you saw. If not, make note of the beak size, shape, and color. Some of the birds on the list have very distinctive beaks making them simple to identify on just the beak.

To follow is a list of small red birds throughout the US and Canada – one of which is likely the one you saw! I also included a color photo of the bird, more detail about its appearance, where it lives, what it eats, and its habitat. Armed with this information you should be able to identify the name of the small red bird you saw.

Appearance: Small bird about 6″ long with a raspberry-red head with lighter shades on the breast, back, and rump. The wings and tail are brown. Females are brown with brown striped breasts and white streaks across their eyes.

Habitat: Prefer coniferous forests in summer along with mixed forests near streams and tree-lined backyards.

Nesting: Purple finches’ nests are found anywhere from 2-60′ off the ground on a tree branch and constructed from twigs, sticks, and plant roots. Lined with grass and hair.

Migration: Purple finches are migrators. While many of them remain in their year-round range, others migrate north in the spring to breed and raise young. Then in the fall, the migrators head south for the winter.
Year-round range: The Pacific coast of Washington, Oregon, and California, and Canada’s British Columbia.
Breeding range: Just east of the year-round range along the Pacific northwest states and Canada’s provinces except for Nunavut.
Winter range: The eastern half of the US (except New England) and southern Arizona.

Appearance: The red crossbill is a small bird about 6.2″ long, dark red-orange with brown singes and tail. Their bill is long, pointed, and “crossed”. A brighter color of red on the head and rump. No crown. The female and young are pale yellow and gray.

Diet: Seeds – especially those inside pinecones. The bird’s “crossbill” is designed to pry open pinecones to get at the seed inside.

Migration: While many red crossbills remain in their year-round range all seasons of the year, many migrate south for the winter.
Year-round range: The western half of the US, Mexico, and all Canadian provinces except Nunavut.
Winter range: Primarily northern Nevada, eastern Montana, North Dakota, South Dakota, northern Kansas, southern Minnesota & Wisconsin, northern Michigan, Pennsylvania, and New England. To a lesser degree, the remaining southern US states.

Appearance: Scarlet tanagers are small birds about 6.5″ long, with vibrant red faces and bodies (although many consider them to be a deep shade of orange), tan beaks, black wings, and short black tails. No crown. The female scarlet tanager (and juveniles) are the same except yellow instead of red.

Feeder food: Scarlet tanagers are unlikely to visit feeders. However, you can attract them by planting berry-producing plants such as blackberries, raspberries, huckleberries, juneberries, serviceberries, mulberries, and strawberries.

Habitat: Thickly forested regions in the eastern US. Often spotted high in the treetops.

Nesting: A loosely constructed nest of grass, twigs, bark strips, pine needs, and other plant materials. The nest rests high in a deciduous tree out in the middle of a horizontal branch about 50′ up. 1 brood/season, 3-5 eggs/brood, eggs are green/blue with multicolored and shaded marks of brown, purple/red. Incubation is 12-14 days and the young fledge is between 9-15 days.

Migration: Scarlet tanagers are migrators. In the spring, they migrate north to breed and raise their young. In the fall, they migrate south for the winter.
Breeding range: Primarily the eastern half of the US (except Florida and Louisiana), as well as the southern part of Canada’s Manitoba, Saskatchewan, and Ontario.
Winter range: South America.

Appearance: The summer tanager is a small bird about 6.5-7″ long, with bright red all over, a long tan beak, a medium-length tail, and no crown. Female and juvenile are yellow.

Feeder food: Unlikely to visit a feeder. However, they can be enticed by planting berry trees and shrubs – especially near a forested area.

Habitat: Open forested areas that contain deciduous & pine trees throughout much of south-central and southeastern US.

Nesting: The nest is constructed primarily from dried grasses and herbs into a small cavity and often placed at the fork of tree branches. 1-2 broods/season, 3-4 eggs/brood, incubation is 11-12 days and the young fledge after about 8-12 days. Eggs are pale blue/green with brown spots.

Difference between a Red Bird and a cardinal

Male cardinals are perhaps the most recognizable red bird throughout the US and Canada. The vibrant red color throughout its body is breathtaking.

There are 3 key differences between other red birds and the cardinal: the crown, the beak, and the body size.

If you’re interested in learning more about cardinals check out my comprehensive article How to Attract Cardinals.

None of the small red birds included in this article are rare. They are all common within the range in which they live.