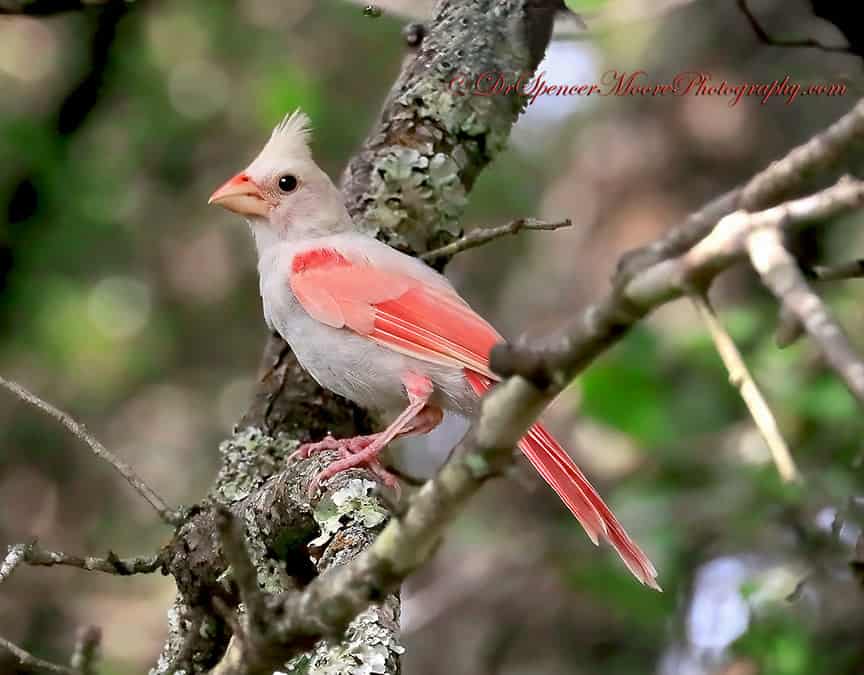 Are there really white cardinals?

Yes, there really are white cardinals. They can be all white, or partially white while the rest of the bird is colored normally. White cardinals with red eyes are albinos.

White cardinals have a condition referred to as albino or leucistic depending on the cause of unexpected coloration. Possible causes include:

So what’s the big deal about terminology? Well, albino is widely understood to be a genetic mutation whereas leucism refers to the inability to deposit melanin. All of these conditions are rare but albino is the rarest.

Which Cardinal Species Is The White Cardinal?

Is a white cardinal an albino?

Albino cardinals are often referred to as full albinos or true albinos and are the rarest form of white cardinals.

Albino cardinals have pink eyes and legs, white feathers, and red on their crown, wings, and/or tail. The most unique identifier of this bird is its pink eyes.

Since this bird is so rare it’s amazing to see them in photos and videos. Yet, I scoured the internet to share these images with you.

Check out this adorable video featuring a baby albino cardinal.

Cause of Albino Cardinals’ White Coloration

Albino cardinals get their unique white feathers from a genetic mutation that prevents the bird from producing melanin. The absence of melanin is due to a missing enzyme called tyrosinase.

Unfortunately, albino cardinals suffer low survival due to poor eyesight since melanin is crucial for good sight. This is why you’ll almost never see an adult albino cardinal.

I just can’t get enough of viewing these interesting birds. Here are some more fascinating photos and videos. Enjoy!

Leucistic cardinals can be fully or partially leucistic and are also rare birds – but not as rare as albino cardinals.  Sometimes people use the term “pied” to refer to birds with leucism.

Many, but not all of them are beautiful birds. While its true beauty is in the eye of the beholder, you have to admit the female cardinal above with the white head is gorgeous!

Since fully and partially leucistic birds have unique appearances and technical differences, let’s discuss them separately.

Here’s an amazing video of a fully leucistic female cardinal spotted in Will County, Illinois.

Another great capture of a white male cardinal (fully leucistic).

Partially leucistic cardinals have black eyes, flesh-colored legs, and scattered patches of white feathers along with normal-colored feathers. White areas are usually grouped in the head, wings, and/or tail.

Here’s a video of a partially leucistic cardinal. He’s especially beautiful (at least I think so!).

Cause of Leucistic Cardinals’ White Coloration

Fully leucistic cardinals are able to produce melanin but something prevents it from depositing the melanin in all of the feathers.

I can’t help it! Here are more photos and videos of rare white cardinals with leucism. Enjoy!

The Difference Between Albino and Leucistic Cardinals

How Rare is a White Cardinal?

Albino cardinals are the rarest of the white cardinals due to the survival challenges resulting from the lack of pigment in their eyes. These birds don’t see as well and rarely make it to adulthood.

Are White Cardinals Male or Female?

White cardinals, whether albino or leucistic, can be male or female.

Where do White Cardinals Live?

Dreaming of a White Cardinal – What does it Mean?

Not all dreams have a positive meaning and that’s the case with white cardinal dreams. In fact, it can serve as a warning for resentment, jealousy, and revenge.

Dreaming of a white cardinal can also signify that someone in your circle of friends or family is depleting you of energy, so you may want to take caution when addressing or taking action on the one causing your exhaustion.

This awareness has the potential for you to create a new start, possibly distancing yourself from someone to regain vitality and become the person you would be proud to become.

The chart below details the cause of each type of white cardinal condition along with what it looks like.

According to David Sibley of the famous Sibley (bird) Guides, there are even more rare colorations that can be present in cardinals.

Lacking eumelanin (Non-eumelanic): Cardinals can also lack the black/gray pigment called “eumelanin” which results in the black mask and any other black markings being absent of color.

Lacking phaeomelanin (Non-phaeomelanic): This condition results when the female cardinal is lacking “phaeomelanin” a chestnut/buff colored pigment. Instead of her buffy brown body, she’s left with varying shades of gray.

Dilute plumage: Lower concentrations of pigment are deposited throughout the bird’s feathers but in lower amounts giving a diluted appearance. So, the bird appears paler appearance or “ghosting” effect.

There are a few more conditions but I think we’ve had enough science for one day.

The white cardinal is a special bird that exists due to a genetic mutation. Either the bird doesn’t produce melanin (albino) or it produces the pigment but doesn’t properly deposit it (leucistic).

Still, what a thrill it would be to see a cardinal with full or partial leucism at the bird feeder or around the yard. Some of the rare color combinations are truly beautiful!