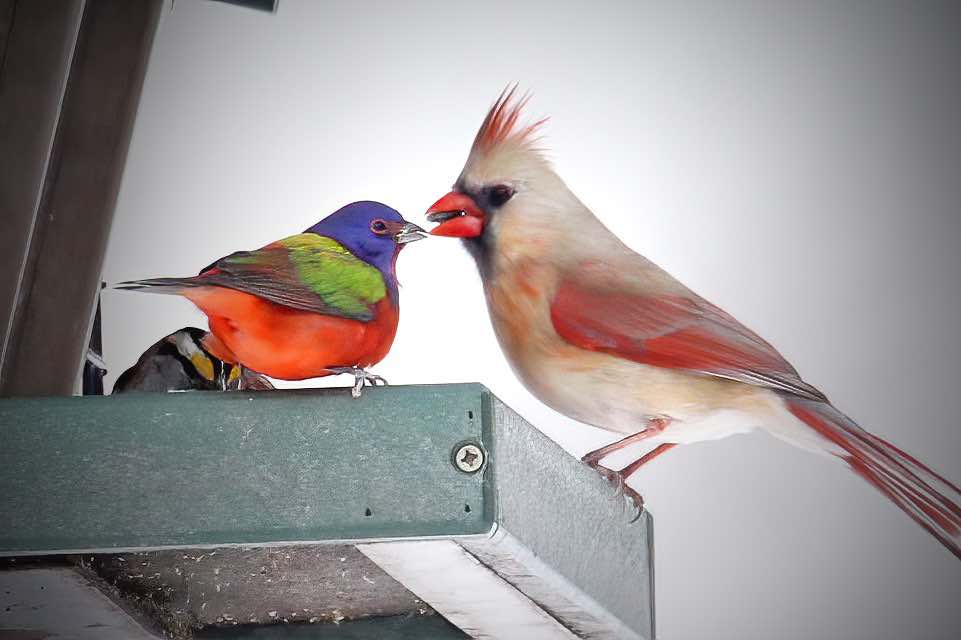 Are you worried cardinals scare away other birds? Nobody wants chaos at the backyard feeder so I get why the concern.

I dove into my photo archives, consulted with my backyard birder friends and have come to a consensus.

Do cardinals scare away other birds?

No. Under normal circumstances, northern cardinals do not scare away other birds. There are numerous instances where they’ve been caught interacting and sharing food with one another in a friendly manner.

Cardinals Are Friendly With other Birds

Ask any backyard birder and they’ll confirm occasions where cardinals and other species are happily co-existing in the wild or at the feeder. In fact, there are more instances of these encounters than not.

Consider the photos below illustrating that cardinals do not scare away other birds.

When are Cardinals Bully Birds?

There are three times each year that many species of birds, including cardinals, exhibit acts of dominance. In particular, but not always, the males. These three times are:

Early in the breeding season, the male cardinal is busy scouting out the best territory in which to attract his mate. This is crucial because females generally want males that are most attractive (bright red plumage) and have the best territories (best food, nesting sites, and protection from predators).

For these reasons, the male’s highest priority is finding and “owning” the prime territory.

Since all males have the same goal in mind at this time, things can get heated when two or more want the same territory.

In order to dominate and ultimately win the territory during this crucial time, male cardinals will fly at each other, peck at, and even bite one another. In the end, only one can rule that territory but until it’s decided they bully their way through the battle.

The female can join in as an aggressor later on to defend their territory.

Middle of the Breeding Season

After the eggs have been laid and while the female is incubating the male may chase away other birds if they come too close for comfort. These acts may be perceived as the cardinal being a bully, but he’s simply defending and protecting their mate and future offspring.

Wintertime at the Feeder

In winter, especially in the northern part of the cardinal’s range, food can become scarce. Since only the strong survive, the cardinal’s survival instincts kick in and they can aggressively fight for food.

This typically comes in the form of the “head-forward display” which Gary Ritchison (biology professor and author of Northern Cardinals) describes as “a cardinal faces its opponent with the body held low, crest lowered, and mouth open.”

Why Would a Cardinal Pick on Other Cardinals?

As previously mentioned, early in the breeding season cardinals may appear to pick on other cardinals but what’s really happening the male cardinal is defending his territory or fighting to have a particular territory.

Since reproduction depends on securing prime territory (for attracting the female and feeding & protecting the young), the male cardinal will do whatever it takes to reign over it. This may include acts of aggression including:

Once the territory has been established and “won” the female will also partake in defending the territory using the same aggressive behavior – flying at the other cardinal, pecking, and/or biting.

As long as we’re on the subject of scary birds…here are a few other commonly asked questions related to cardinals.

Do Blue Jays scare away Cardinals?

Yes. Blue Jays are commonly known as bullies toward many bird species, including cardinals. Blue Jays are bigger and louder than just about any other bird (aside from crows) and are the common cause for many birds to escape their presence – especially at the feeder.

What birds are Cardinals afraid of?

Cardinals are medium-sized songbirds that can usually hold against other medium and small songbirds thus are not afraid of them. Larger birds like blue jays can scare them off – especially since blue jays are known for being bully birds.

Birds of prey are another story. Cardinals are very afraid of hawks, owls, and osprey because these birds of prey would LOVE to have them for dinner.

Are Cardinals Good to Have Around?

Cardinals are wonderful to have around. For one, cardinals can be a welcome splash of color when your yard sometimes seems like a sea of brown feathers. Then I see a flash of vibrant red fly to a nearby tree and my heart starts pumping. The female cardinal is perhaps more beautiful to me with her buffy brown crown and bright orange beak!

I personally have cardinals in my yard on a regular basis and can honestly say I get excited every time I see one.

Cardinals are rather shy birds so aren’t interested in bullying your other feathered friends so you can enjoy a variety of species at your feeder. Watching them all interact is a delight and why we are backyard birders in the first place! The possible exception to cardinals being friendly with other birds, as mentioned earlier in this article, is during the breeding season when they’re securing and protecting territories or during the winter if food is scarce.

Many believe cardinals bring good luck or a message from a loved one who has passed away. This can be heart-warming especially if you’ve lost someone dear to you.

If you want these amazing wild birds in your yard you must check out my article 7 Proven Ways to Attract Northern Cardinals to Your Yard – Guaranteed!

What bird feeder is best for cardinals?

I did extensive research purchasing and trying several different bird feeders for cardinals and found the best ones that they will actually use. Check out my article The 3 Best Bird Feeders for Cardinals.