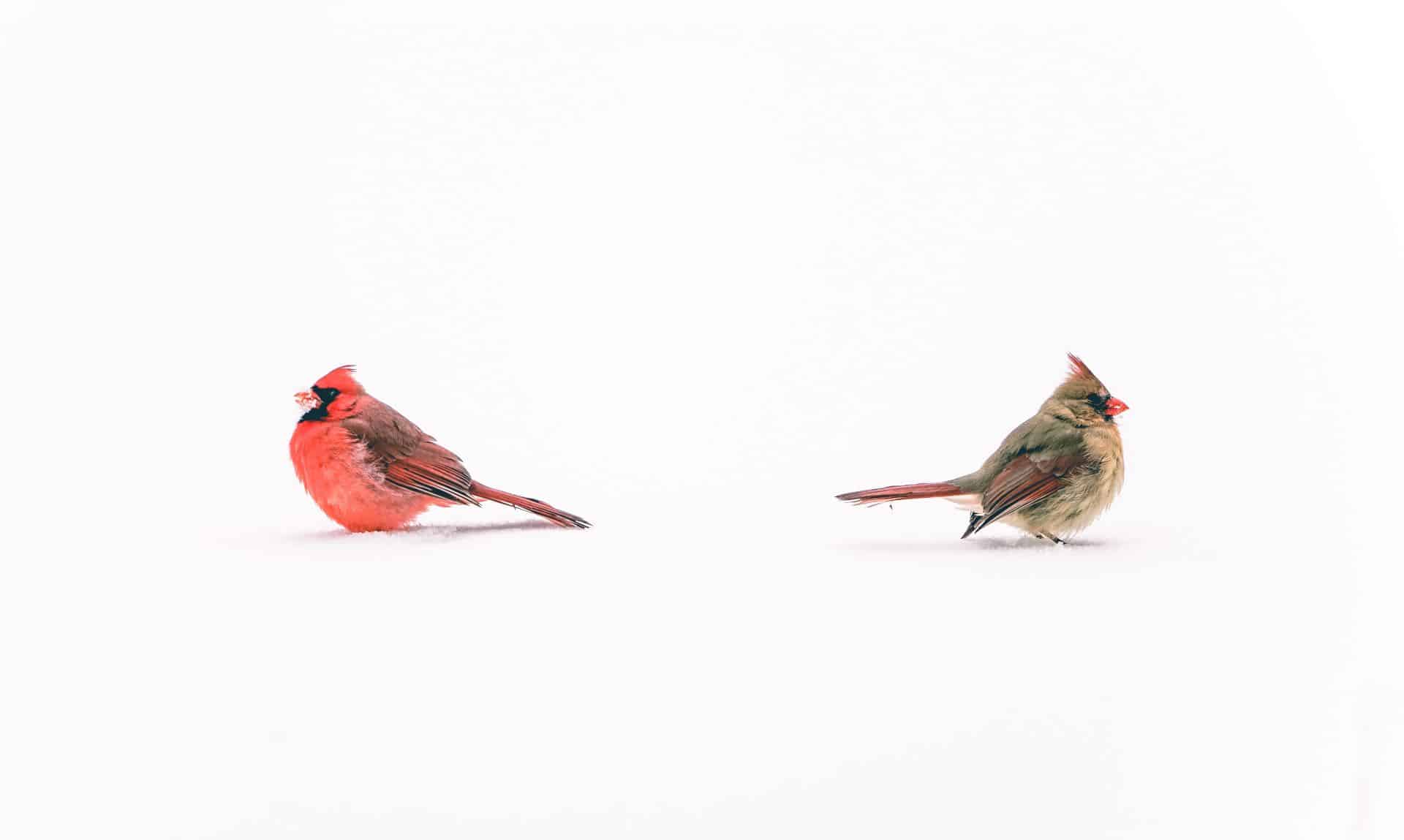 Isn’t it romantic to think animal couples, such as cardinals, mate for life? It’s not like they have more important things to deal with, right? They can find a partner and fly through life happily ever after. I bet they wish that were true.

Do cardinals mate for life?
The simple answer is “Yes, cardinals are predominantly monogamous and generally mate for life”, but the accurate answer is more complicated than that. For example, a female cardinal may choose a different partner from one season to the next or mate with another male other than the one she is currently paired with.

Asking if cardinals mate for life is sort of like asking if humans mate for life. We’d like to think people date one person at a time, marry one person, have one or more kids, and stay together faithfully until the day they die. Sometimes that happens, other times not.

It’s similar for cardinals. While they are predominantly monogamous and generally mate for life, sometimes they engage in shenanigans such as cheating on their partner, choosing a different mate, and sometimes getting back together.

It’s not really fair to compare a human and a cardinal’s romantic relationships. Cardinals are animals and when it comes to choosing and staying with a significant other, they have completely different priorities. Their sole concern is successful reproduction – as many healthy offspring as possible.

Pennsylvania State University tells us “on average, northern cardinals live for 3 years in the wild” which is rather dismal and underscores the birds’ desperate need for reproduction success.

Each spring the male will choose a territory. The ideal territory is abundant in food options, has the best nesting sites available, and protection from predators. This is important because, in order to attract a female, the male needs the best territory he can find.

The male will sing and dance within their territory to attract a female. Apparently, he thinks this is attractive – you be the judge:

Next, the female cardinal chooses the male she wants to pair and mate with. Studies indicate the brighter red males are considered better choices. There are several reasons behind this which you can read about in this article: Bright Red Cardinals: Is Red Their Super Power? In general, the brighter male, the better territory, and the better chances for reproduction success.

Once the female chooses her mate, the rest of the breeding season goes something like this:

OK, that’s a condensed version of what really happens.

I think the female cardinal deserves the Mother of the Year award! What do you think?

Like most wild birds, cardinals’ lives revolve around predictable and consistent activities that happen every single year.

Each spring begins with cardinals pair-bonding as described in the previous section (the female chooses her mate). Now, back to the question “Do cardinals mate for life?”. The statement “cardinals are primarily monogamous” doesn’t really answer the question. To explain, let me first define monogamy as it relates to animals.

Given the cardinal’s primary objective in life is to successfully reproduce, it makes sense why the bird is not always monogamous. Let’s examine the 3 main pair-bonding scenarios where the cardinal is not strictly monogamous.

3 Main Scenarios Where Cardinals are not monogomous

1. The Female Cardinal Chooses the Same Male Every Year

2. The Female Cardinal Chooses a Different Male Than Prior Year

While older cardinals will often continue to pair with previous years’ partners, it’s not always the case. If the female wasn’t impressed with the reproduction and/or parenting abilities of last year’s partner, she may seek out a better quality male. Although this is not the norm, it does happen.

In this scenario, “Are the cardinals mating for life?” No – she had a previous partner. “Are the pair monogamous?” Yes. The new season brings a new opportunity to choose a mate to be monogamous with.

3. The Female Cardinal Chooses The Same Male But She is Unfaithful

A study conducted at the University of Kentucky by researchers Gary Ritchison, Paul H. Klatt, and David F. Westneat, entitled Mate Guarding and Extra-Pair Paternity in Northern Cardinals, revealed that female cardinals have been unfaithful on occasion.

DNA testing of cardinal offspring from the same brood confirmed different fathers. This can only mean one thing – she was unfaithful! However, this is not the norm. The study calculated a 13.5% instance of extra-pair fertilization.

In this scenario, “Are the cardinals mating for life?” Yes – as far as we know. “Are the pair monogamous?” No. Lady cardinal cheated.

What about the male cardinal – does he cheat?

I cannot tell a lie. I’ve found no scientific evidence that a paired male cheats on his partner.

What happens if a cardinal mate dies?

The next logical question is, what happens if a cardinal mate dies? Remember, the bird’s primary objective in life is to reproduce, so if their mate dies they will find a new one.

According to Birds & Bloom, finding a new mate is done quickly. Time is of the essence!

So, while humans may think of our partners in terms of love, romance, and marriage, cardinals consider their bond serious business. While we ask “Do cardinals mate for life?”, the cardinals ask “will this mate provide lots of thriving babies?”. They’re animals after all and it’s strictly a matter of reproduction success.