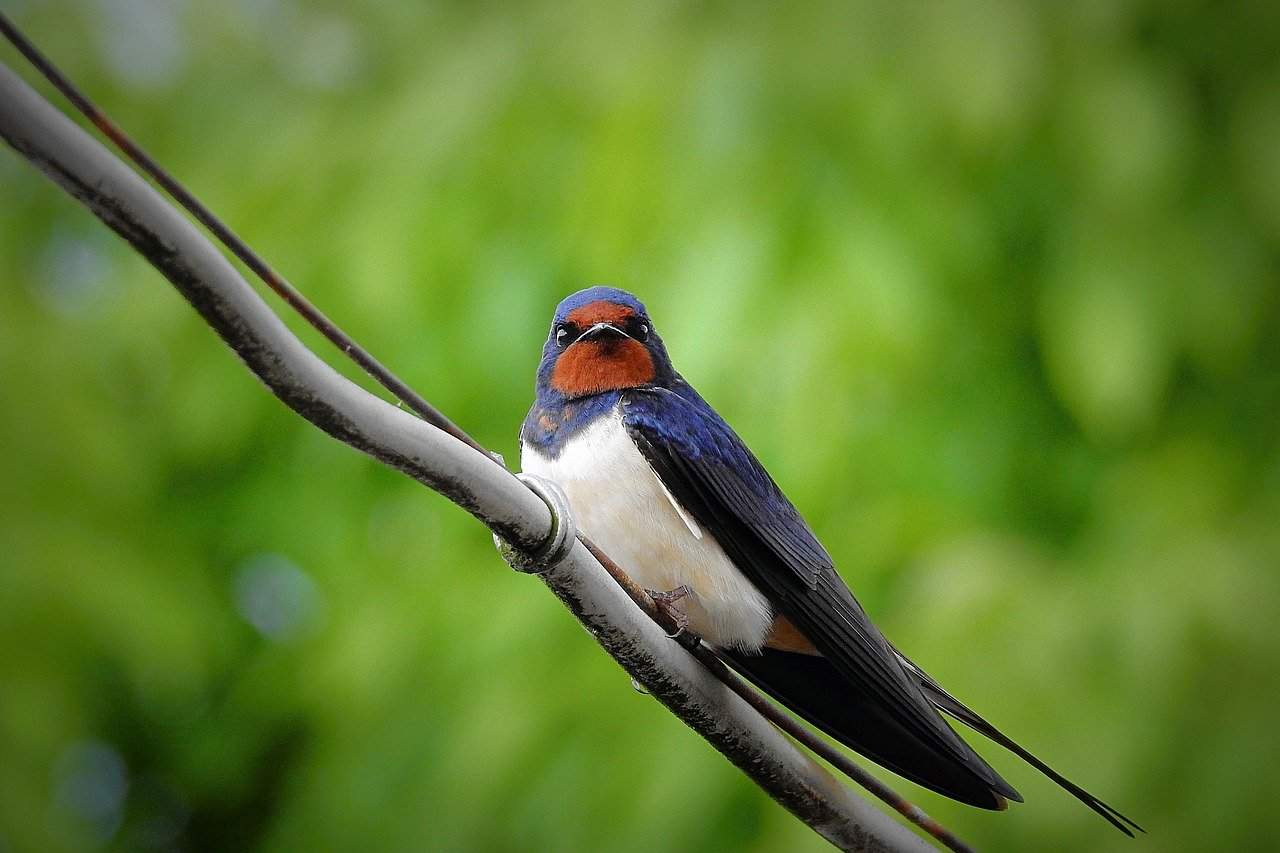 Inside: Discover the swallow bird’s meaning and symbolism from the perspective of religious groups, cultures, certain circumstances such as dreaming of a swallow or seeing one, and even swallow tattoos!

Swallows are small birds that dart and swoop across the landscape in pursuit of insects. Depending on the species, they come in a variety of colors including blue, green, purple, black, and chestnut. One thing they all have in common is a long forked tail. The clan includes purple martins, barn swallows, tree swallows, cliff swallows, and violet-green swallows.

Along with being recognizable while flying, swallows have distinctive spiritual and symbolic meanings. Cultures worldwide see swallows as significant birds representing joy, hope, love, and loss. The small passerines have an elegant flying style, and their visual acuity makes them adept at catching prey in the air.

Swallows have different meanings, depending on the culture. In Greek mythology, the bird represented Aphrodite, the goddess of love. Romans believed the swallow symbolized the souls of children who died while being born. To Christians, swallows represented hope.

Spiritually, swallows represent breaking out of your comfort zone to experience different things in life. Overall, the free-flying bird represents mindfulness and faithfulness, which people can bring into their spiritual relationships with higher beings and into their commitment to family and loved ones.

The Celts saw the swallow as a connection to ivy, making it a wise bird that drew knowledge from plants, animals, and trees.

Native American symbolism regarded the swallow as a representation of modesty and hard work. In the southwest, tribes saw the swallow as a sign that beautiful weather was on the horizon. Hopi stories claimed that swallows brought corn seeds to the tribe to keep them from going hungry. Another tale involves the swallow stealing fire from the sun to bring to humans, causing the bird’s tail to split.

The Chinese saw the swallow bird as a symbol of wealth and loyalty, so many shopkeepers had swallow images in their stores.

Nearby, in Japan, the swallow represented the arrival of spring. It is a symbol of good luck, fertility, and fidelity and can often be found in Japanese embroidery.

The Greeks believed deities could change their form into a swallow. They associated the swallow with Aphrodite as it was believed to bring happiness in love. Even though Aphrodite often brought sadness and pain, when she was represented by a swallow, she brought luck.

The Romans believed swallows were sacred birds that carried the souls of dead children. Because of this, the Romans did not kill swallows because killing them brought bad luck.

In Christianity, the swallow was a symbolic representation of the birth of Jesus, as the Christ Child was said to make “birds of clay.” The swallow also represented the coming of spring due to its return to the skies in early spring.

The Patronus was invented in the world of Harry Potter and is first introduced in Harry Potter and the Prisoner of Azkaban. If your Patronus is a swallow, you believe in happy endings. Members of Slytherin house often have a swallow as a Patronus because they believe the birds are representations of passion and a drive to win.

Sailors consider swallows as important birds. They knew they were close to home when they saw swallows in the sky. Many sailors would tattoo swallows on their arms for every 5,000 nautical miles they traveled. Some sailors thought swallows could bring a drowned sailor’s soul to heaven.

People who have Swallow as their spirit animal tend to be lovable and patient. The swallow also represents cheerful and happy people who enjoy spending time with their friends and family.

When a swallow’s nest appears on under a roof, it brings good fortune to the family living under it. Swallows help with faithfulness and fertility when they make a nest atop a house.

Swallow nests are easy to recognize. They build their nests on artificial structures with mud and grass. The nests have a muddy look and a cup-like shape with a small hole where the birds enter and exit.

Swallow Bird Meaning in The Bible

Swallows appear several times in The Bible. In Proverbs, the swallow compares to a curse without cause that cannot fly. In Psalms, swallows making a nest are compared to God’s altars providing homes for people.

In Isaiah, the prophet asks that God provides security, so he can fly like a swallow, tweet like a crane, and moan like a dove. He wants to be himself rather than feel oppressed. Finally, in Jeremiah, the lines show how the swallow knows its migration time, but people do not understand the Lord.

People often dream about flying. When the dreams include swallows, the dreamer can expect to have a pleasant meeting with a person they haven’t seen in a long time. The visit will involve conversations about childhood, which give the dreamer and visitor more reasons to get together.

Sailors and prisoners often get tattoos with swallows, but for different reasons.

A swallow tattoo showcases a sailor’s experience on the water. They often put the tattoo on their chest, hands, or neck. Each swallow tattoo represents 5,000 nautical miles. They can also show an epic voyage around the Horn of Africa.

When the swallow tattoo has a dagger through it, the tattoo represents the memory of a friend lost at sea.

When a prisoner has a swallow tattoo, he has done his time in jail. The length of the tail can show how much time the prisoner spent behind bars. The tattoo comes from the cockney (a dialect of East London) rhyming slang saying “bird lime” and “doing time.”

If you’ve never seen a swallow, take a peek at this video:

Meaning of Seeing a Swallow Bird

You can expect good luck if you see a swallow flying near you. The birds also show that you need to free yourself from something hindering you from having success.

Yes, swallows are protected birds. In 1918 the United States established the Migratory Bird Treaty Act. This act protects swallows and their nests. People who intentionally kill, injure, take, transport, sell, or purchase swallows can get arrested. While this law protects birds, it does create a nuisance for people who have several swallows nesting in their eaves and barns.

The swallow is an elegant bird known for its freedom of movement and representation of spring. Some of the oldest civilizations recognize the swallow as a positive symbol of luck, prosperity, and fidelity.

When you learn the habits of the swallow it’s no wonder that these magnificent birds bring so much knowledge and representation to different cultures and religions across the world.