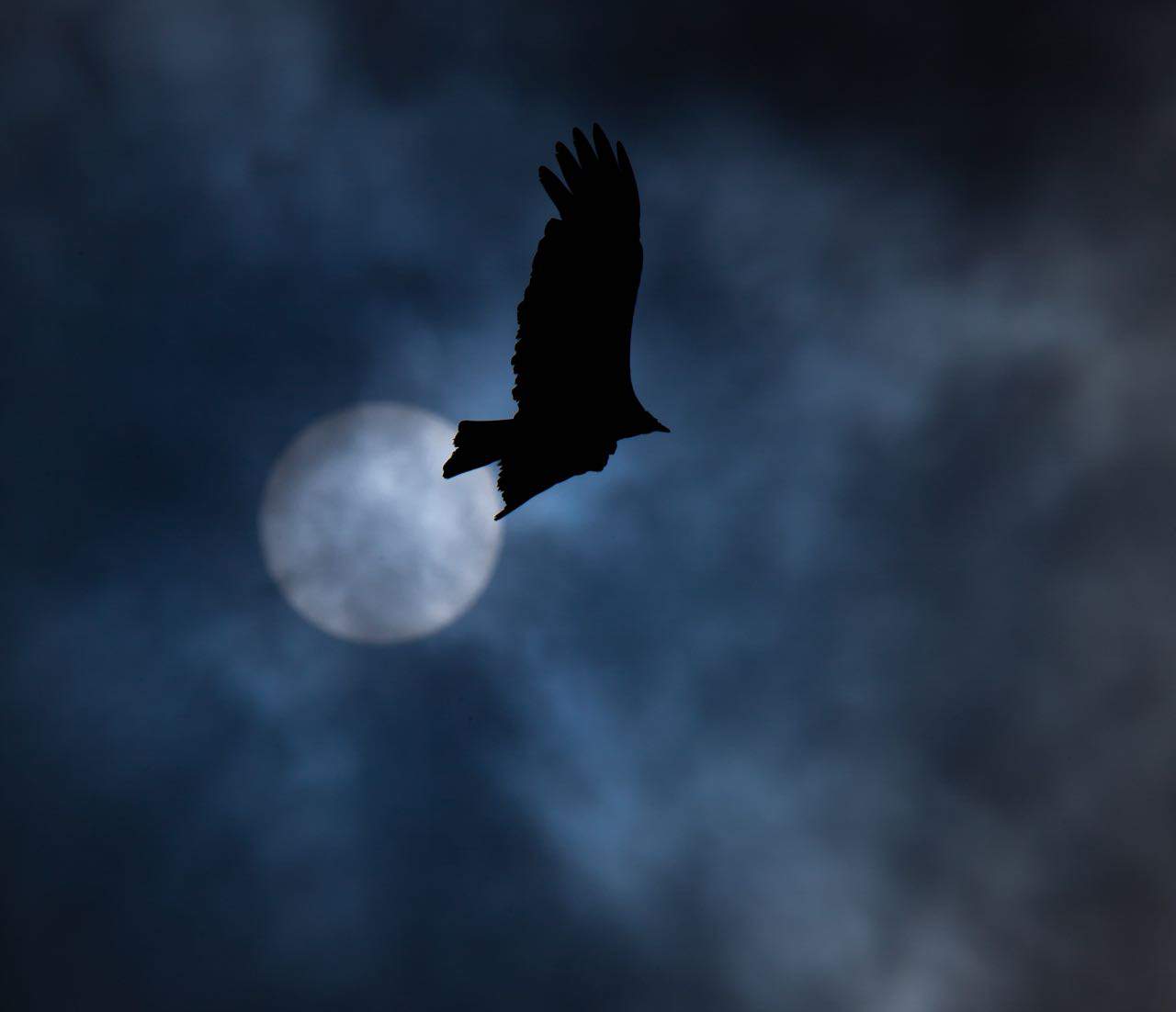 Have you ever wondered if birds fly at night? What about if they roost at night. What are our wild bird friends doing while we’re catching our 40 winks?

Luckily, the answers to these questions are well researched. Ornithologists and birders alike have collected tons of data about birds’ nighttime habits. Most of the research indicates that, at night, many birds lead lives just as stimulating as those they lead by day.

You might be surprised to learn about bird activity at night. In this article, I answer those thought-provoking questions about what birds are doing at night. First, let me answer the pressing question everyone has on their mind:

Do Birds Fly At Night?
Yes. About 30% of North American birds do fly at night. These nocturnal birds hunt prey, provide food for their nest of young, and are generally active during the night.

Some birds do fly at night, but they are in the minority. Most birds are active in the day (called diurnal birds) and do not fly at night unless under duress.

One of the first ways we can categorize bird species is by their sleeping habits. Splitting up the vast number of bird species into categories will help us determine why some sleep at night and some fly.

Birds active during the day are called diurnal. Diurnal species comprise a good chunk of the birds, songbirds, raptors, and waterfowl we see every day.

Not all diurnal birds are active at the same time, and we can observe how some birds forage for seeds early in the morning while others hunt at night for food. All the same, diurnal birds return to their nests at night and do not generally fly at night.

The flip side of diurnal bird activity is nocturnal activity.

Birds active at night are called nocturnal. About 30% of North American birds are nocturnal.

You might not be aware of the nocturnal birds living near you since they are generally asleep in the daytime. Owls and nighthawks are just two varieties you may have the pleasure to see at sunset or early in the morning.

Diurnal and nocturnal birds have different body clocks. That is, they have no control over their sleep and flying schedules.

Do Birds Fly at Night?

30% of North American birds do fly at night. These nocturnal birds hunt prey, provide food for their nest of young, and are generally active during the night.

Night migration is an event that small birds sometimes perform to avoid dangerous predators like eagles and hawks who are active solely during the day.

Why Do Birds Fly at Night?

Nocturnal birds specialize in flying at night. Their bodies are tuned to perceive the sounds and sensations that prey makes in the night. Owls fly at night because they have the bodies to do so.

Just by comparing the bodies of nocturnal and diurnal birds, we can discover the advantages that nocturnal birds have for hunting and flying at night. After all, unless a diurnal bird is provoked, distressed, or in danger, they generally avoid activity during the night.

Nocturnal birds fly at night because their evolutionary development has made them ideal to do so. Addit common characteristics of nocturnal birds are:

Which Species of Birds Fly at Night?

If you happen to find yourself in nature in an area with plenty of bird species nearby, the odds are that any birds you see at night are nocturnal.

Though a minority of all bird species are nocturnal (or semi-nocturnal), they number some of the most extraordinary birds in nature.

A list of common nocturnal birds would include some of the following:

In addition to these nocturnal birds, a category of birds is active during the periods between night and day. So-called crepuscular species hunt, sing, and fly in the dawn and dusk. We might consider these species semi-nocturnal.

Can Birds See in the Dark?

Yes, most nocturnal bird species can see in the dark. Take a look at a Great Horned Owl, and you’ll see how refined their eyes have become over time.

Large eyes collect more ambient light at night than we’re accustomed to seeing. This extra sensitive seeing power allows nocturnal birds to remain hidden and distant from prey and humans during the night.

Their enhanced sense of smell and facial disks also contribute to their ability to discern friend from foe in the dark.

What Else Do Birds Do at Night?

Besides flying, nocturnal birds search for food, preen their feathers, perform courtship rituals, and generally do all the same activities that diurnal birds do.

Many people wonder about hearing birdsongs at night. Nocturnal birds do not customarily sing at night, as that would give away their advantageous position over prey. If you do hear birdsong at night, it could be an owl hoot.

It’s much more likely to be the song of a diurnal bird disturbed by streetlights, though. Robins, song thrushes, and hedge sparrows do, however, sing late into the evening and early in the morning.

The world of nocturnal flying birds is an exciting one. They live in a different universe than ours, and their bodies are extraordinary specimens of evolution. Not only do birds fly at night, but they live an entirely distinct life with special mating rituals, roosting patterns, feathers, and hunting tactics.

Learning more about night-flying birds is a great way to expand your appreciation for bird species as a whole—and birding for nocturnal species is just as fun!